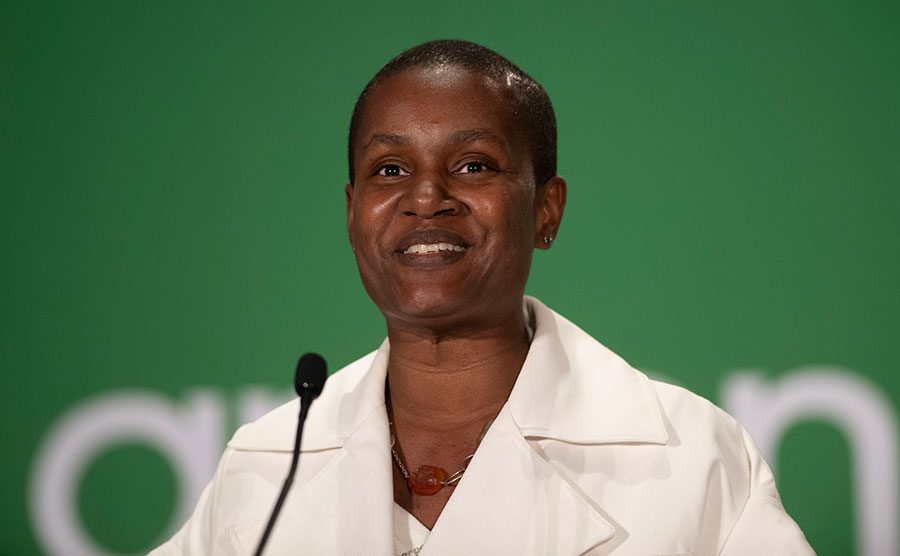 The Green Party has chosen Toronto lawyer Annamie Paul to take over as its leader, replacing Elizabeth May, who has served as the political face of the environmental movement for nearly 14 years.

Paul, 47, was declared winner on Saturday after defeating her closest competitors by 2,000 votes on eight rounds of voting.

Regarded as a moderate choice compared to the various “eco-socialists” candidates also running for leadership, Paul called the issue of climate change “an existential threat to human life,” promising to bring “daring, creative leadership” to “match the challenges of this time.”

Her campaign website suggests she opposes fracking, would like to see a reduction of mining and is calling for a 60 per cent reduction in carbon emissions over 2005 levels while encouraging investment in renewable green infrastructure and carbon capture technology.

Born in Canada to Caribbean immigrants (her mother hails from Nevis and her father from Dominica), Paul not only becomes the first Black politician to take over the reigns of a federal political party but also the second of Jewish faith. Her background should give her a strong voice, not only on environmental issues but also those of race, immigration and gender as well.

She faced down both racism and anti-Semitism during the campaign. The CBC reports that during a virtual town hall meeting leading up to the convention, she was called the N-word by one online participant, and a “f—ing Jew” by another.

In spite of this or perhaps because of it, Paul promised during her campaign to “bring diversity into our party and into politics because it’s time that diversity was represented at the very highest levels of leadership.”

The Toronto-born lawyer has long been a voice promoting diversity in politics. In 1996, she founded the Canadian Centre for Political Leadership, an organization that focuses on helping “women, racial minorities and aboriginal peoples in pursuit of public office.”

After studying law at the University of Ottawa and earning a Masters of Public Affairs at Princeton, Paul’s career took her around the world working as an adviser to the International Criminal Court and a social entrepreneur working with NGOs on climate change and global issues.

Party at a Crossroads

Paul takes over the leadership of a party that has reached a crossroads in terms of national support. The 2019 federal election saw the Green Party deliver its best showing ever, winning three seats and capturing 6.4 per cent of the vote.

Much of that credit goes to the former leader, Elizabeth May, who took the party from  fringe status to its historic performance in 2019.

However, despite the strong showing, many party insiders expected better results. Under May’s long-time leadership, the party was seen as stagnating especially after repeatedly failing during elections to translate its popular environmental message into political power.

After the election, a movement started within the party that deemed a younger, more dynamic leader with a more “radical” vision than May’s was necessary to improve the party’s electoral aspirations.

Paul, who calls herself a “superfan” of May’s, will be tasked with taking the party to the next level. In her victory speech, she thanked May for her service but noted that it was time for the party to move in another direction.

“You have matched a leader to the challenges of this time,” said Paul in her speech. “We need to match the party to the needs of this moment.”

And she took immediate aim at the political gridlock that has developed around the issue of climate change.

“The other parties are simply out of ideas. They are intellectually exhausted,” she told Green supporters after her big win. “This is a moment that demands daring, courageous leadership, and this is something that we simply didn’t see in the last speech from the throne,” she said. “I only heard empty words.”

Besides pushing the environmental agenda, Paul is a big advocate of improving the long-term care sector. Paul recently lost her father to an avoidable death in an elder care facility that had become overwhelmed by the COVID-19 outbreak and has been calling for long-term care to be enshrined in the Canada Health Act.

And she says she was “bitterly disappointed” that Prime Minister Justin Trudeau didn’t call for an inquiry to look at the 7,000-plus COVID-19-related deaths that have occurred in long-term care.

Paul ran as a Green candidate in 2019 federal election in Toronto Centre but came a distant fourth to eventual winner Bill Morneau.

Now, besides fulfilling her new duties as national leader, she must gear up to run again in that same riding in an Oct. 26 by-election that will replace Morneau, who resigned amid the We Charity controversy.

This election will be a difficult testing ground for the new leader. The Liberals, who desperately want to retain that seat to shore up their minority government, are also running a prominent Black candidate for the vacant riding.

Broadcaster Marci Ien, best known as the co-host on CTV’s daytime talkshow The Social (and recently profiled in a Zoomer magazine feature on diversity in the beauty industry) has put her broadcasting career on hold to run for the Liberals.

Is the Green Party too Narrowly Focussed on the Environment?