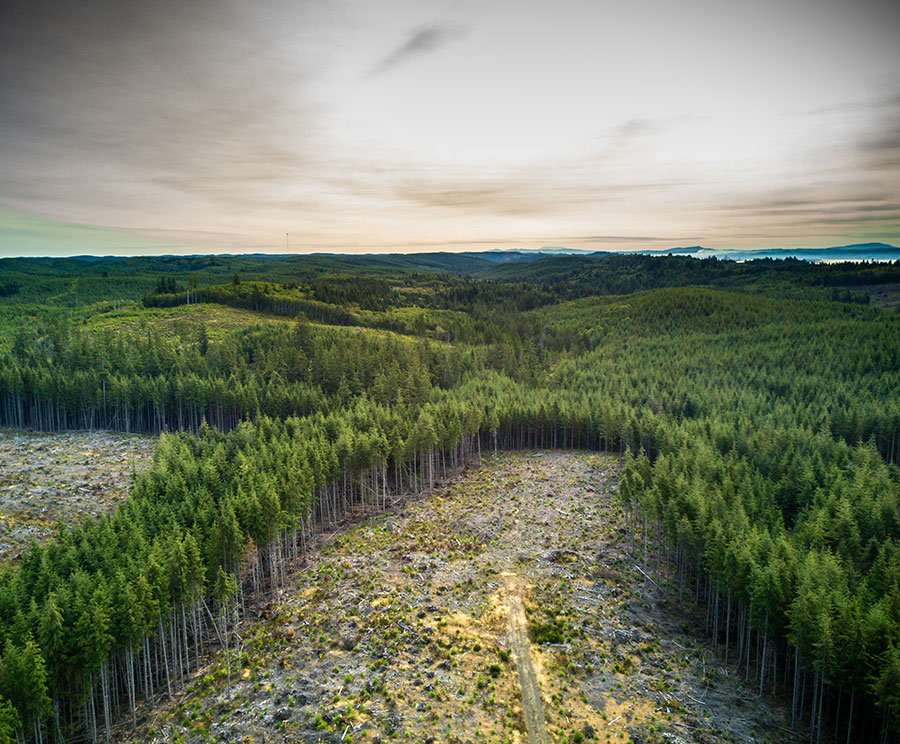 Amidst the pandemic, Terry Sunderland, a Professor in the Faculty of Forestry at the University of British Columbia, looks at how deforestation has played a part in increasing our exposure to infectious diseases. Photo: Halbergman/Getty Images

The year 2020 marks the 75th anniversary of World Food Day, a UN Food and Agricultural Organization (FAO) initiative “established to increase awareness of world hunger and poverty and to inspire solutions for world change.” This year, the FAO notes that the event occurs, “in an exceptional moment as countries around the world deal with the widespread effects of the global COVID-19 pandemic. It’s a time to look into the future we need to build together.”

With that in mind, we take a closer look at how the environmental impact of our diets can actually put us at greater risk of future pandemics.

As the global population has doubled to 7.8 billion in about 50 years, industrial agriculture has increased the output from fields and farms to feed humanity. One of the negative outcomes of this transformation has been the extreme simplification of ecological systems, with complex multi-functional landscapes converted to vast swaths of monocultures.

From cattle farming to oil palm plantations, industrial agriculture remains the greatest driver of deforestation, particularly in the tropics. And as agricultural activities expand and intensify, ecosystems lose plants, wildlife and other biodiversity.

The permanent transformation of forested landscapes for commodity crops currently drives more than a quarter of all global deforestation. This includes soy, palm oil, beef cattle, coffee, cocoa, sugar and other key ingredients of our increasingly simplified and highly processed diets.

The erosion of the forest frontier has also increased our exposure to infectious diseases, such as Ebola, malaria and other zoonotic diseases. Spillover incidents would be far less prevalent without human encroachment into the forest.

We need to examine our global food system: Is it doing its job, or is it contributing to forest destruction and biodiversity loss — and putting human life at risk?

What Are We Eating?

The food most associated with biodiversity loss also tends to also be connected to unhealthy diets across the globe. Fifty years after the Green Revolution — the transition to intensive, high yielding food production reliant on a limited number of crop and livestock species — nearly 800 million people still go to bed hungry; one in three is malnourished; and up to two billion people suffer some sort of micronutrient deficiency and associated health impacts, such as stunting or wasting.

The environmental impacts of our agricultural systems are also severe. The agricultural sector is responsible for up to 30 per cent of greenhouse gas emissions, soil erosion, excessive water use, the loss of important pollinators and chemical pollution, among other impacts. It is pushing planetary boundaries even further.

In short, modern agriculture is failing to sustain the people and the ecological resources on which they rely. The incidence of infectious diseases correlates with the current loss of biodiversity.

Few viruses have generated more global response than the SARS-CoV-2 virus responsible for the current pandemic. Yet in the past 20 years, humanity has also faced SARS, MERS, H1N1, Chikungunya, Zika and numerous local outbreaks of Ebola. All of them are zoonotic diseases and at least one, Ebola, has been linked to deforestation.

Farming large numbers of genetically similar livestock along the forest frontier may provide a route for pathogens to mutate and become transmissible to humans. Forest loss and landscape change bring humans and wildlife into ever-increasing proximity, heightening the risk of an infectious disease spillover.

An estimated 70 per cent of the global forest estate is now within just one kilometre of a forest edge — a statistic that starkly illustrates the problem. We are destroying that critical buffer that forests provide.

Zoonoses may be more prevalent in simplified systems with lower levels of biodiversity. In contrast, more diverse communities lower the risk of spillover into human populations. This form of natural control is known as the “dilution effect” and illustrates why biodiversity is an important regulatory mechanism.

The pandemic is further heightening pressures on forests. Increased unemployment, poverty and food insecurity in urban areas is forcing internal migration, as people return to their rural homes, particularly in the tropics. This trend will no doubt increase demands on remaining forest resources for fuel wood, timber and further conversion for small-scale agriculture.

The links between zoonoses and wildlife has led to many calls during the current pandemic to ban the harvest and sale of wild meat and other forms of animal source foods. That might be too hasty a reaction: wild meat is an essential resource for millions of rural people, particularly in the absence of alternative animal food sources.

It is, however, not necessarily essential for urban dwellers who do have alternative sources of animal protein to purchase wild meat as a “luxury” item. Urban markets selling wild meat could increase the risk of zoonotic spillover but not all wet markets are the same. There are countless wet markets throughout the world that do not sell wildlife products and such markets are fundamental to the food security and nutrition as well as the livelihoods of hundreds of millions of people.

Even before the COVID-19 pandemic took hold, international agencies, including the Committee on World Food Security, have been concerned about the long-term viability of our current food system: could it provide diverse and nutritious diets while maintaining environmental sustainability and landscape diversity? The current pandemic has highlighted major shortfalls in our environmental stewardship.

We must harness the interconnected nature of our forests and food systems more effectively if we are to avoid future crises. Better integration of forests, agroforests (the incorporation of trees into agricultural systems) at the broader landscape scale, breaking down the institutional, economic, political and spatial separation of forestry and agriculture, can provide the key to a more sustainable, food secure and healthier future.

Terry Sunderland is a Professor in the Faculty of Forestry at the University of British Columbia.

After COVID-19 Closures, Will the Movie Theatre Industry Learn from History to Adapt Post-Pandemic?

Faces of a Pandemic: Shining a Light on the Everyday Heroes of the Covid-19 Crisis