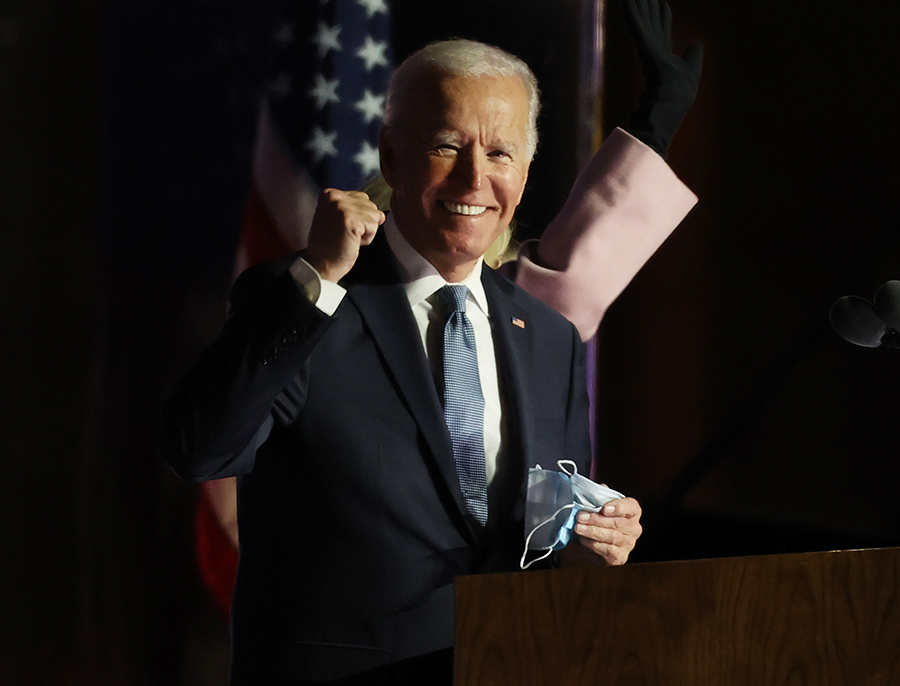 Joe Biden's presidency may not be as exciting as Donald Trump's, but that's probably a good thing. Photo: Tasos Katopodis/Getty Images

As spontaneous parties broke out across America at the announcement of Joe Biden’s presidency, many could hardly believe that four long years of Trumpism had finally come to an end.

Joe Biden is what America  — and the world — needs now;  a calm hand at the tiller to repair and heal the wounds left by four years of disruptive Trumpism.

Exit the upstart arsonist who torched the soul of America. Enter the veteran elder who can douse those flames.

Even before he takes office, Biden’s experience as a respected Washington politician for almost 50 years is invaluable.

The awful but delicate business of easing (or, more likely, dragging Trump out of the White House) is already afoot. Biden and his team are quietly working with Republican politicians to intervene.

Biden’s long career in the Senate, his years of working across the aisle with the likes of Mitch McConnell and other Republican leaders, is invaluable in this pivotal moment.

Unlike Trump, who was a newcomer to government when he appeared on the scene, Biden knows his way around Washington. He knows where the vulnerabilities and strengths lie and he knows how to take advantage of them for the good of the country, not for his own aggrandizement.

When Biden turns 78 in two weeks, he’ll be the oldest U.S. president in history. Ronald Reagan was 77 years and 349 days old at the completion of his second term.

While 78 may seem like a great age, the effects of age hit different people in different ways.

Some 78 year olds are in nursing homes struggling with dementia. Others are CEOs of corporations. Dr. Anthony Fauci, who will be 80 next month, runs 3.5 miles a day and is said to work 19 hours a day leading the charge against COVID-19 as head of the National Institute of Allergy and Infectious Disease at the U.S. National Institutes of Health.

Nancy Pelosi is indefatigable at 80 and plans to run again for Speaker of the House of Representatives.

Like these older public figures, Biden is fit and vigorous and, while he may have his occasional senior moments, he more than compensates these slips with able statesmanship.

What he lacks in articulateness, he achieves with astuteness.

A Man of the Times

Born in Scranton, Pennsylvania in 1942, Biden hails from a very different America. Growing up in a middle-class Irish-American family, he played high school football, earned a law degree and married Neilia Hunter, a fellow student at the University of Syracuse. The couple settled in Wilmington, Delaware, where he became a public defender, which spurred his interest in politics.

While today he may seem to many younger people as  just another old white man from this nostalgic by-gone era, his ability to bring together the nostalgia of the past with the desire for change of today’s younger generations is perhaps his strongest asset. Remember, he lived through ’60s, another time of tumultuous cultural upheaval, which taught him a lesson in adapting to the times, a quality that’s paramount to the success of any politician.

After a successful Senate career, which began in 1972, he served two terms as vice president under Barack Obama and remains very close to America’s first Black president. Seeing the galvanizing effect that Obama had on not just Blacks but all racialized Americans, he wisely chose Kamala Harris, a South Asian and African-American woman, as his second-in-command.

This was not only the right thing to do but it also helped win him the election. According to early exit polls, an astonishing 87 per cent of Black voters backed Biden, with a huge showing in the urban areas of the battleground states that ultimately propelled him to victory.

None of this would have been possible without Biden’s experience, age, long service to the country and ability to work with all Americans — not just a loyal base.

There are, however, also the qualities of the man to be considered.

Biden is a man who has been chastened and tempered by tragedy and loss. His first wife, Neilia Hunter Biden and infant daughter Naomi died in a car accident in 1972. While Biden tried to put the tragedy in his past and married Jill Tracy Jacobs in 1977, he was once again touched by grief when his son Beau died of brain cancer in 2015.

These personal tragedies and political setbacks – he failed twice at earlier attempts to win the presidency – are very much a part of who Joe Biden is today.

He brings a sense of decency and humility to the White House, replacing the overwhelming hubris that has reigned there for the last four years. He offers compassion where, before him, there was only pitilessness. He proposes reconciliation instead of the divisiveness that has completely taken over politics.

So, no, we don’t need excitement. We don’t need the fireworks. Cancel the carnival. Call off the clowns.

All we need is a decent, experienced and capable man in the office of U.S. president. And a steady hand guiding the country forward to real and inclusive greatness.

It’s a tradition for every politician addressing the nation to end with “God bless America.”

This time, He did.