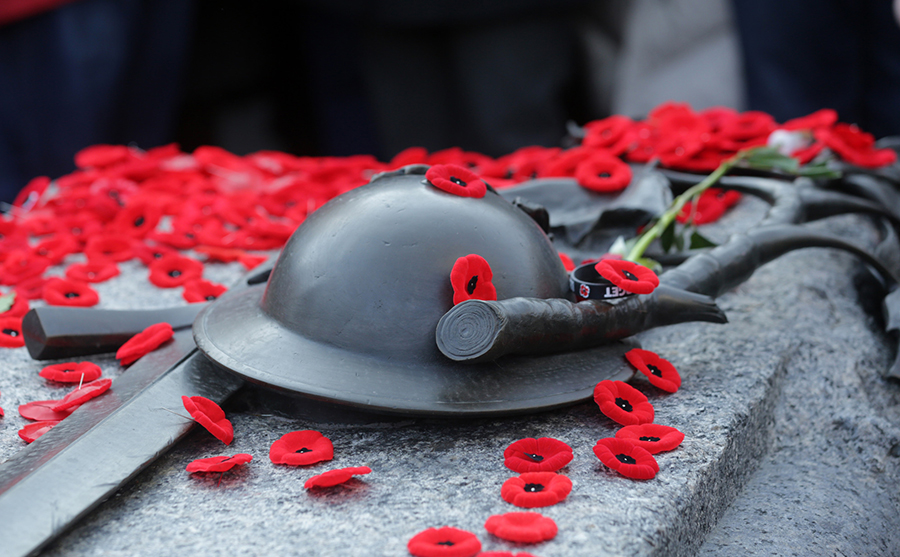 Remembrance Day events across the country, including those held at the National War Memorial in Ottawa, will be scaled back significantly as public health officials continue to discourage large gathering to control the spread of COVID-19. Photo: Mike Carroccetto/Getty Images

Each year on Remembrance Day nearly 35,000 Canadians gather at the National War Memorial in Ottawa and at cenotaphs across the land to honour the men and women who have died serving our country.

While the tradition that was started in 1931 (until then, it was known as Armistice Day) will carry on, this year’s November 11 commemoration will feel a lot different. That’s because COVID-19 health restrictions mean the ceremonies will be scaled back and spectators will be limited.

“It is disappointing to discourage people from attending ceremonies this year,” said Danny Martin, the Royal Canadian Legion’s Ceremony Director, who is in charge of the Ottawa proceedings. He says that in most places, the maximum amount of participants will be limited to 100.

While Remembrance Day 2020 was set to pay special tribute to the 75th anniversary of the end of the Second World War, because of COVID-19 health restrictions the Legion will go ahead with national and local events without the usual trappings that have grown up around the event.

At the national ceremony in Ottawa, there will be no Veteran’s Parade, no Canadian Armed Forces Parade and the Colour Party and military bands will be greatly reduced. The moving wreath-bearing ceremony will also be shelved this year, as wreaths will be pre-placed this year.

“Beyond watching national and local broadcasts, thankfulness is also reflected by wearing a Poppy,” says Martin. “And wherever they may be, Canadians can take two minutes of silence at 11 a.m. on the 11th.”

The national event will be televised by major broadcasters. Or you can honour our fallen by going online and joining the Legion’s Facebook Live broadcast of the event, which starts at 10:45 (ET) on November 11.

After the ceremony, you can stay online and visit the Legion’s Virtual Wall of Honour and Remembrance, an online photo montage of “Canadian veterans who have served and sacrificed for the freedoms we enjoy today.”

So while you may not be able to make it out to your local Remembrance Day service this year, there are still ways you can honour the men and women who died in battle serving Canada.

And if you’re one of the millions who haven’t been able to buy a poppy this year, you can still support the Veterans by going to Legion’s online Poppy Store and purchasing a poppy-adorned clothing, jewellery, tote bags, cell phone cases — even Christmas tree ornaments.

A Year of Commemorating Virtually

In a year where technology, more than ever, is reinventing how we communicate, it’s also allowing us to honour war veterans and survivors in digital form. In January, the Duchess of Cambridge photographed two Holocaust survivors with their grandchildren — images that were widely disseminated across social media — to mark the U.K.’s Holocaust Memorial Day. And in May, Queen Elizabeth II — an avid pandemic Zoom user — marked the 75th anniversary of VE Day via a video address.

Meanwhile, Dimensions in Testimony, an initiative conceived by experiential exhibit designer Heather Maio and produced by Steven Spielberg’s USC Shoah Foundation, films Holocaust survivors discussing their experiences and uses AI technology to turn them into interactive holograms, which members of the public can engage with in a real-time conversation. The first interviewee was Pinchas Gutter, a Polish-born Holocaust survivor who immigrated to Canada, and the exhibit is featured in three U.S. Holocaust museums so far.

And, of course, don’t forget Captain Tom Moore, the 100-year-old British Second World War vet who became a sensation during the pandemic for walking around his garden for charity and raising more than £30 million. Social media spread his story around the world, inspiring similar acts of charity and providing hope in a time of distress. And recently the centenarian announced another charity effort to help inspire more happiness — launching a digital campaign in support of people experiencing loneliness and isolation during pandemic lockdown.

So, while Remembrance Day looks different this year, we’d do well to remain hopeful and recall the mantra Captain Tom tweeted: “Tomorrow will be a good day.”