“May We Never Forget” – Amidst the Battle Against COVID-19, Canadians Pause to Honour Fallen Troops 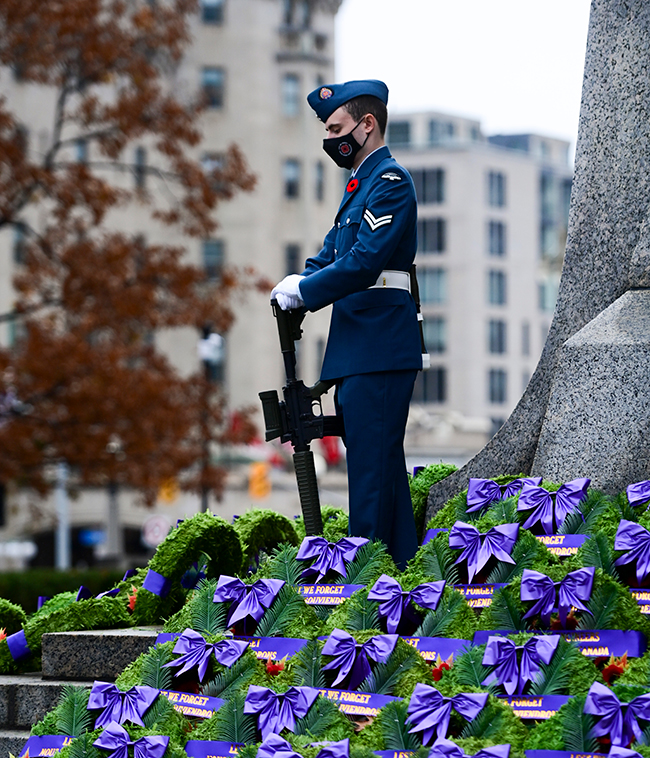 A sentinel stands guard during the Remembrance Day ceremony at the National War Memorial in Ottawa. Photo: The Canadian Press/Sean Kilpatrick

Neither the threatening weather that settled in over Ottawa today, nor the raging pandemic that hangs like a dark cloud over much of Canada, could put a damper on the National Remembrance Day ceremonies held in our nation’s capital and across the country.

And despite the fact that spectators were discouraged from attending this year, a hardy group, some holding Canadian flags, gathered at a safe distance to pay their respects to the men and women who have died serving Canada.

In a ceremony that was greatly reduced in size and scale, Prime Minister Justin Trudeau, Governor General Julie Payette and a smattering of dignitaries didn’t make any speeches but were still able to convey the honour and respect to our fallen troops in a quiet, dignified — and very Canadian — manner.

In normal years, the square is packed with veterans, dignitaries and throngs of spectators, who gather amidst great pomp and circumstance to pay tribute to those who fought and died preserving the freedom of our country.

But in 2020, with social-distancing health measures in full effect, the service was greatly scaled back. Still, the gloomy weather, muted ceremonies and unusually sparse crowd added a poignancy to this year’s Remembrance Day — one that not only honoured those who died in past wars but those who are on the front-line of the fight against the pandemic.

“We are not in a war but we are in a battle,” noted Rabbi Reuven Bulka. In his Benediction, he compared the pandemic to “an enemy in camouflage” while thanking “heroic” frontline workers as well as military members who were called in last spring to help out in overwhelmed nursing homes in Quebec and Ontario.

There was no Veteran’s Parade or Colour Party, and the ceremonies were greatly limited in size, if not in spirit. And the fly-past of vintage aircraft was also cancelled, due to cloudy weather over Ottawa.

Baiza Kene, of the Ottawa Children’s choir, along with a Canadian Armed Forces Band, started the ceremony with a moving rendition of “O Canada.” Trumpeter Sgt. Frederic Paci turned in a stirring rendition of the always moving “Last Post.”

As the bells atop the Peace Tower began ringing, heralding two minutes of silence in honour of or fallen, the Act of Remembrance (“Age shall not weary them”) was read by veterans in English, French and Algonquin.

Like everything other aspect of the day, the wreath-laying ceremony while greatly truncated, still managed to retain some of its dramatic effect. Gov. Gen Payette, (who, as Commander in Chief of Canada’s armed forces, appeared in full navy uniform) placed the first wreath at the cenotaph.

She was followed by Deborah Sullivan, this year’s National Silver Cross mother (each year, a memorial cross is given to a mother or wife of a fallen soldier).

“It is with gratitude that we remember our veterans,” said Chapdelaine. “We do not take for granted the sacrifices of those who laid down their lives for us.”

The Royal Canadian Legion, which was in charge of today’s ceremonies, are encouraging people to show their gratitude by visiting the
Virtual Wall of Honour and Remembrance, an online photo montage of “Canadian veterans who have served and sacrificed for the freedoms we enjoy today.”