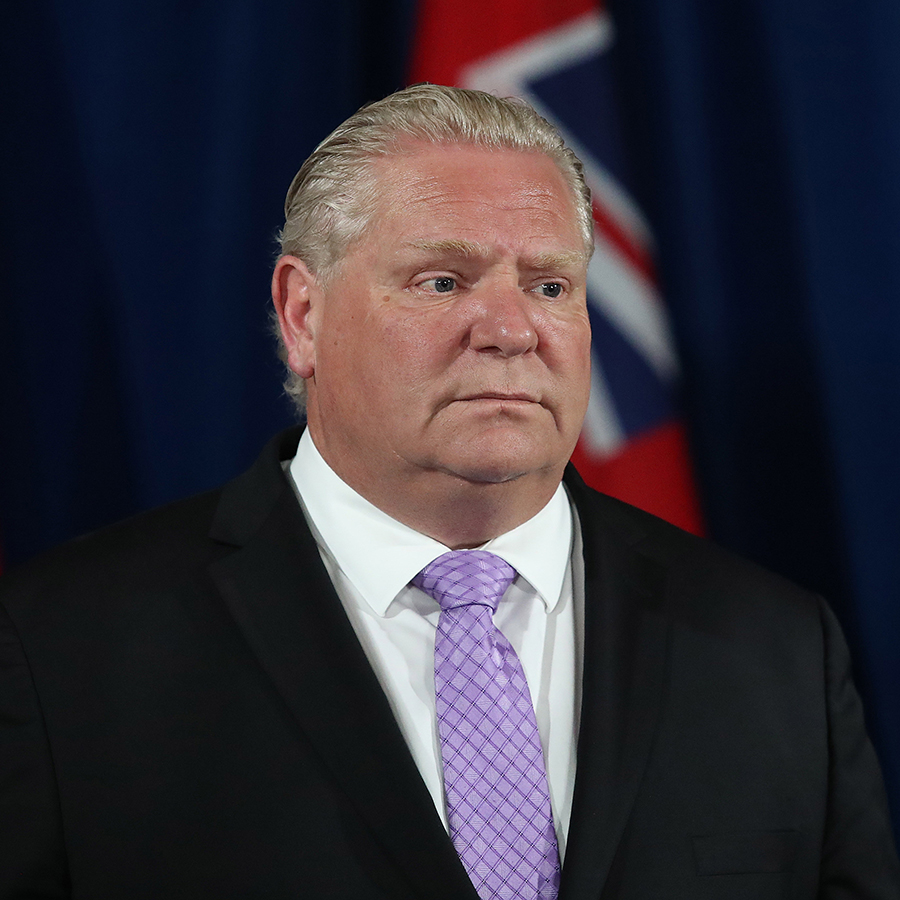 Ontario Premier Doug Ford and his government are coming under fire for ignoring input from public health experts on strategies to combat COVID-19 — which some critics fear could cause more harm to vulnerable citizens like those in long-term care homes. Photo: The Canadian Press/Steve Russell

After a day of withering criticism from health experts and angry citizens, the Ontario government has decided to strengthen its new colour-coded COVID-19 guidelines.

Experts felt that the recently released framework — which sets out guidelines for local public health authorities on when to impose restrictions on business openings and public gatherings — was far too lenient. They raised the alarm that unless the thresholds were strengthened, the spread of COVID-19 would continue unabated, putting the lives of Ontarians at risk.

The original guidelines, which ignored the advice of Public Health Ontario and were deemed dangerously lax, stipulated that red-zone restrictions should be imposed when regions have a weekly incidence rate of 100 cases per 100,000 people and a positivity rate of 10 per cent.

In response to the flood of criticism, however, Ontario Health Minister Christine Elliot  is now strengthening these guidelines. The new standard for the red zone will be 40 cases per 100,000 and a positivity rate of 2.5 per cent, which is in keeping with the PHO’s original advice.

She also announced that beginning Saturday, several regions where cases are skyrocketing (Toronto, Halton, Peel, Hamilton and York) will be moved into the red zone. Elliot warned that people living in these red zones should only leave their homes for essential purposes.

And Elliot noted that Brant, Durham, Eastern Ontario, Niagara, Ottawa, Waterloo and Wellington-Dufferin-Guelph would all be moving into the orange zone, which means heightened restrictions on businesses and public gatherings.

Doug Ford’s Conservative government is coming under heavy fire for ignoring input from public health experts when developing the government’s new COVID-19 strategy, and then allegedly lying about it to the public.

The government’s new COVID-19 Response Framework — a bewildering set of colour-coded instructions that only a bureaucrat could understand — is actually based on good intentions. The idea is to promote economic activity by allowing businesses and workplaces in areas where COVID-19 is under control to remain in operation.

However, as the province struggles with record high daily case counts, Premier Ford’s government is facing growing criticism that his new guidelines not only ignore science but are also endangering the public. In a statement today, the Ontario Medical Association called the framework “too lax” suggesting that it, “allowed too many businesses to remain open even when many people in their communities have the virus.”

And the Toronto Star is reporting that the Conservative government ignored the advice  of Public Health Ontario (PHO) that the framework was “dangerously lax” and “insufficient to contain the spread of the virus.”

On Friday, Health Minister Christine Elliot told reporters that the guidelines were “designed after full consultation and advice” from all government health advisory groups, omitting to mention that she had ignored the advice of the PHO.

Ontario Liberal Party leader Steven Del Duca called the development a “jaw-dropping scandal. Pointing to new modelling that suggests Ontario could see 2,000 new cases of COVID-19 each day by mid-December, he lambasted Ford for ignoring the input of the PHO and accused the the government of lying about it to the public.

“Doug Ford ignored the advice of Ontario’s top doctors and then lied to us about it,” said Del Duca. “His lie has led to skyrocketing COVID cases and a new wave of tragedy in our nursing homes.”

At a press conference in Hamilton today, Premier Ford responded to the growing controversy, calling the claim that he ignored his own experts as “totally inaccurate” and characterizing the criticism of the new framework as “one doctor’s perspective.”

“We went along with the framework approved by [Ontario’s Chief Medical Officer] Dr. Williams,” said Ford. “It’s easy for people to say just shut everything down,” he continued, asserting that his government was taking a “balanced approach” that considers both the health and safety of everyone and the economy.

Announced on Nov. 10, the controversial guidelines are part of a government effort to boost the economy by providing a consistent and province-wide COVID-19 strategy to local public health authorities on when they can loosen restrictions on businesses and workplaces and when they must tighten them.

The aim is to avoid a province-wide shutdown and allow local health officers to make the decision based on case numbers in their regions. For example, by following these guidelines, a gym in Sudbury (where the number of cases is acceptably low) would be allowed to open its doors to the public while a gym in Toronto (where cases are spiralling ever higher) would be shut to the public, at least until the number of cases was under control.\

Here’s how the Response Framework works:

Green If the weekly COVID-19 incidence rate in a specific region is less than 10 cases per 100,000 people and hospital and ICU capacity is deemed adequate, workplaces and businesses can open with loosened restrictions. Public gatherings will be limited to 50 people indoors and 100 people outdoors.

Yellow If the weekly incidence rate is between 10 and 39.9 per 100,000 and hospital and ICU capacity is deemed adequate, there will be increased measures on workplaces, businesses and public gatherings if they want to remain open.

Orange If the weekly incidence rate is between 40 and 99.9 per 100,000 people and hospital and ICU capacity is under pressure, restrictions on workplaces, businesses and public gatherings will be enhanced.

Red If the weekly incidence rate is greater than 100 per 100,000 and hospital and ICU are over capacity, gyms, cinemas and casinos will be closed; restaurants and indoor spaces will be limited to 10 people per facility.

Grey If it disease numbers continue to trend higher, then a full lockdown will be implemented and the government will consider declaring an emergency, as it did last spring. Only essential businesses will be allowed to remain open.