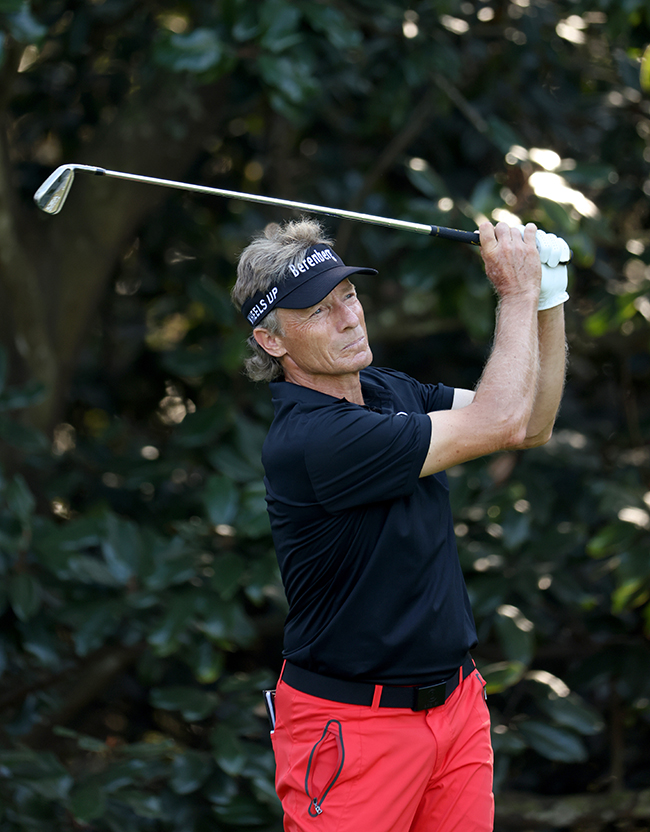 Bernhard Langer, who's the oldest to ever make the cut for the Masters at age 63, finished three-under for the tournament with a spectacular performance on Sunday. Photo: Jamie Squire/Getty Images

German golfer Bernhard Langer turned in one of the most amazing performances ever for an older golfer at the 2020 Masters Tournament, a golf course that has seen its share of incredible performances.

The 63-year-old Langer, who has won twice at the challenging Augusta, Ga., course, not only became the oldest golfer ever to make the Saturday cut, but he capped that achievement with a performance for the ages on Sunday.

On his way to finishing three-under for the tournament, the diminutive Langer, who really doesn’t look his age (he’s in top shape and has a great head of hair to boot), even sank this extraordinary 63-foot putt – one foot for each of his 63 years.

This astonishing putt, his superior short game he displayed all weekend and his surprising finish put him well back of Masters winner Dustin Johnson. But Johnson, who turned in a flawless effort, crushed the field with a 20-under, the nearest competitors a distant five back.

Langer’s finish in the top 25 was only one of the more surreal accomplishments in this bizarre Masters, which was cancelled in April because of the COVID-19 pandemic and moved to November where it was held in front of a scattering of spectators. The other strange occurrence had to be Tiger Woods looking like a Sunday duffer on the 12th hole, where he bumbled his way to a 10 – on a par-three!

Langer’s one-under round on Sunday meant he finished two strokes ahead of Bryson DeChambeau, a top-10 player and the odds-on favourite coming into the tournament.

“I know how to play this golf course and I have to play my angles and rely on my short game,” said Langer, explaining how he was able to use his age and experience to trump youth and power at Augusta this year.

“Even though I’m bombing it by him, he’s still playing better than me,” agreed the 27-year-old DeChambeau. “That’s the cool part about the game of golf. You can shoot a score whatever way you want, and he’s able to do it still at his age.”

And 31-year-old Irish golfer Rory McIlroy was equally wowed by the old guy’s showing. “It’s so impressive, just the way he methodically plots his way around and gets it up and down when he needs to. It’s really cool to watch.”

Langer, appearing in his 37th Masters, won his first way back in 1985, when this year’s champ, Dustin Johnson, was still in diapers. And despite the fact that he was by far the shortest hitter out there, he used a combination of experience and savvy to outlast the young bombers.

Besides stunning the gold world, Langer showed his wit, noting on Twitter that if they’re going to present the winner the coveted Green Jacket, surely he should get something for his with his age-defying play.

This prompted much good-natured humour on social media, including one wag who suggested that instead of being awarded the Green Jacket, Langer should instead win the Green Cardigan.

When asked if he’ll be back to play at Augusta next year, Langer said he was optimistic he would be back.

“I think I have a few more in there,” Langer said. “You never know.”