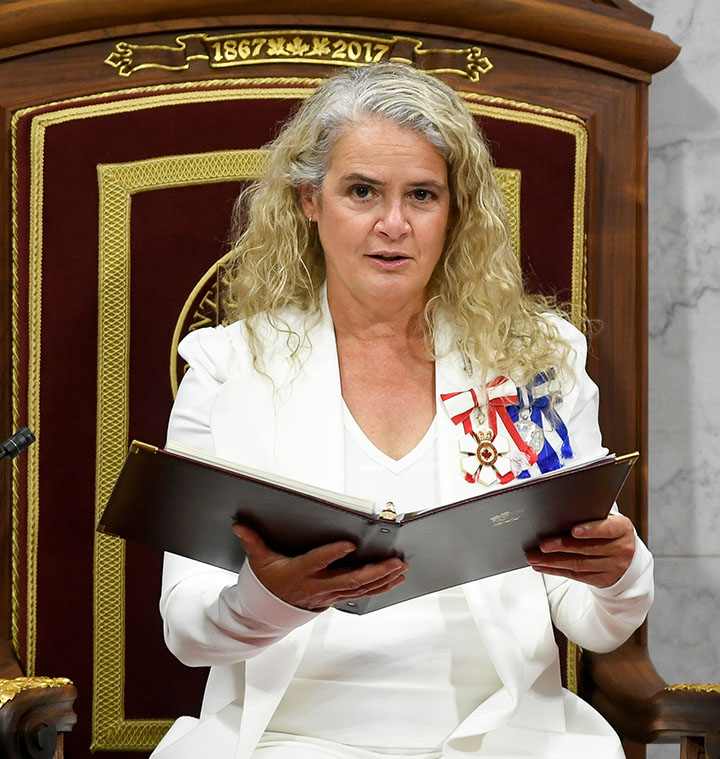 Julie Payette, seen here delivering her Throne Speech in the Senate in September 2020, stepped down as Canada's Governor General today amid allegations that she created a toxic workplace environment at Rideau Hall. Photo: Adrian Wyld / Pool / AFP via Getty Images

Prime Minister Justin Trudeau says his government is looking at strengthening the vetting process after his pick for Canada’s governor general — Julie Payette — resigned on Thursday reportedly following a government investigation that uncovered damning evidence that she harassed and bullied staff.

“We are looking right now at processes that can be strengthened as we move forward and we will have more to say on that as we make decisions.”

Payette, a 57-year-old former astronaut, was appointed governor general — the Queen’s representative in Canada — by Trudeau in 2017.

Trudeau also noted today that he’d had a phone call with the Queen to bring her up to date on the situation and inform her that Chief Justice Richard Wagner would fulfill the governor general’s duties until the prime minister names a new person to the position.

And although the government review isn’t expected to be made public until next week, the Globe and Mail is reporting that sources familiar with the content say it “painted a very negative picture of the work environment inside the Governor-General’s office.” CBC also quoted sources who described the tone of report as “blistering.”

In a statement released Thursday, Payette said that while she takes these “allegations very seriously,” she contends that “we all experience things differently.” She noted, “No formal complaints or official grievances were made during my tenure” but felt that because “tensions have arisen at Rideau Hall,” she came to the “conclusion that a new governor general should be appointed.”

The Queen’s Privy Council, which is headed by close Trudeau friend Dominic LeBlanc (who, besides being Minister of Intergovernmental affairs, is also the son of a former Governor General Roméo LeBlanc, who served in the role in the mid-’90s), launched the review in July 2020 in response to a CBC news report featuring “public servants and former employees confidentially claiming Payette had belittled, berated and publicly humiliated Rideau Hall staff.”

The investigation heard from more than 50 current and former employees about conditions in the office. That included reports that Payette frequently threw tantrums in the office, ridiculed her staff’s work and reduced staff members to tears. One staff member described the office as a “house of horrors,” which resulted in a constant flow of staff resignations.

At the time, Payette tweeted in response to the CBC feature saying that she takes “workplace harassment issues very seriously” and was “committed to ensuring that every employee … enjoys a secure and healthy work environment.”

As late as September, as the governor general was preparing to read the speech from the throne, Trudeau was still defending Payette and downplaying the workplace harassment charges. In response to a question about whether Payette should be allowed to read the throne speech while she was under investigation, Trudeau responded,  “We have an excellent governor general right now, and I think, on top of the COVID crisis, nobody is looking at any constitutional crises.”

The CBC reports that LeBlanc “is overseeing the review and is expected to offer recommendations to Prime Minister Justin Trudeau on his response.”

In her statement Thursday, Payette thanked Trudeau “for his trust” and said it was an “honour and a privilege” to “meet, represent and celebrate the accomplishments of thousands of extraordinary Canadians from coast to coast over the past years.”