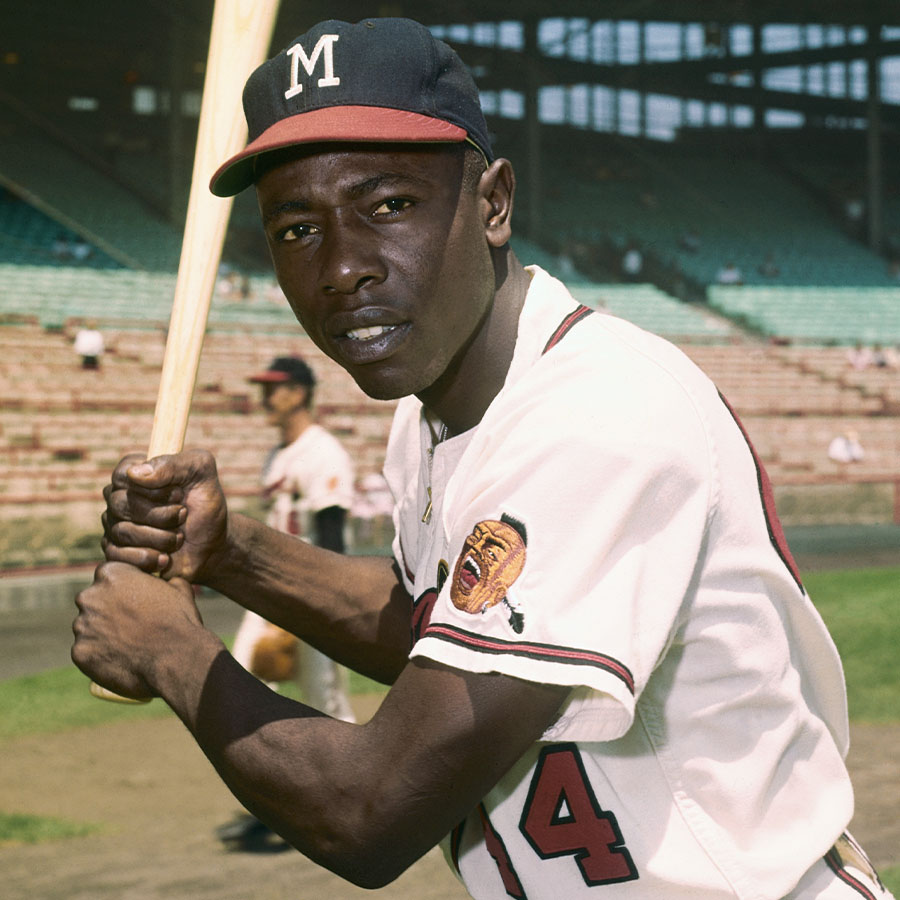 Hank Aaron, the baseball icon that bested Babe Ruth's home-run record while facing down racism in the major leagues, passed away at the age of 86 on Friday. Photo: Bettmann/Getty Images

Hank Aaron, the iconic baseball player who broke Babe Ruth’s home-run record while facing down racism, has passed away.

The 86-year-old sports icon, known throughout his career as Hammerin’ Hank, died peacefully in his sleep this morning in Atlanta. He’s best known for breaking Babe Ruth’s record of 714 home runs, finishing up with a remarkable 755 in total.

And while his astounding home-run totals have since been surpassed by Barry Bonds in 2007, many sports fans still rightly regard him as the true home run king. Because unlike Bonds, Aaron set his remarkable record without aid of performance-enhancing drugs.

In a Tweet today, Bonds hailed Aaron as a “legend and a true hero” who set an example for “African-American ball players who came after you.” And the rest of the world joined him in mourning his loss. Basketball superstar Bill Russell, who faced down racism himself, tweeted, “Heartbroken to see another true friend & pioneer has passed away.” Former Boston Red Sox power-hitter David Ortiz tweeted that Aaron was “the best.” Documentary maker Ken Burns called Aaron “a remarkable American hero.” And Barack Obama called the legend “one of the strongest people I’ve ever met.”

Born in 1934 in Mobile, Ala., Henry Louis Aaron had two strikes against him right from the start – not only did he grow up in a poor family but he did so in the Jim Crow South. Blacks were segregated from the rest of society, and this promising young athlete was forbidden from playing baseball with white kids.

Aaron had no choice but to improvise, honing his baseball skills by hitting bottle caps with sticks and playing with his brothers (including Tommie, who also made it to the major leagues) on dusty sandlots instead of the well-maintained diamonds the other kids enjoyed.

A Difficult Path to Greatness

His path to the major leagues was by no means easy, an experience not uncommon for other top young Black athletes of his era. Even though Jackie Robinson had broken the colour barrier when he signed for the Brooklyn Dodgers in 1947, it would be a long time before the sport accepted full integration.

A standout player in high school, Aaron didn’t attract much interest from any major league team and was forced to sign with the Indianapolis Clowns of the Negro Leagues. But the skinny young outfielder with the powerful wrists, whip-like bat and all-consuming focus on becoming the best began putting up such impressive numbers that he demanded attention.

In 1951, the Boston Braves (who later moved to Milwaukee and then Atlanta) offered him a contract worth $200 a month. And in 1954, with the young Aaron showing his prowess at the plate and in the field, he earned his first major league job playing for Milwaukee.

It was here that he launched his remarkable assault on major league pitching, playing more than 3,000 games. He finished with 3,771 hits, slugged .555 and drove in 2,297 runs (still a record). Along the way, he played in 25 All-Star games, captured one MVP award and led the underdog Milwaukee Braves to a surprise World Series championship in 1957 over the New York Yankees.

Over the course of 23 seasons, he set a standard of consistency that has never before been matched, finishing at or near the top of the league each year in batting average and home runs. And as the homers piled up, he began approaching the Babe’s mythical total of 714, a record many had assumed would stand forever.

With the Braves now playing in Atlanta, Aaron entered the 1974 season one homer shy of setting the record. His chase, which had captured the attention of the whole sports world, should have been a glorious moment crowning a magnificent career. But it was marred by an outpouring of hatred from racists who just couldn’t accept the fact that a Black man could unseat their white champion.

He received volumes of mail, many congratulatory but an alarming amount that included racial taunts or even death threats, including a hand-scrawled note that read: “Retire or Die.” Aaron would later recall: “I had to go out the back door of the ball parks. I had to have a police escort with me all the time.”

Undaunted, Aaron would eventually silence what a Sports Illustrated writer described as “the goblins that lurk in baseball’s attic” and hit his momentous home run.

Legendary broadcaster Vin Scully, calling the game on national television, summed up the enormity of this achievement: “What a marvellous moment for the country and the world. A Black man is getting a standing ovation in the Deep South for breaking a record of an all-time baseball idol.”

While the achievement vaulted Aaron into baseball immortality, the outpouring of racism sucked out all the joy from what should have been a glorious moment. “All of these things have put a bad taste in my mouth, and it won’t go away. They carved a piece of my heart away,” he later told the New York Times.

Known as a quiet superstar who shunned the spotlight, he would often downplay his accomplishments, saying: “I just tried to play the game the way it was supposed to be played.”

But the stoicism he displayed during his epic home run chase and the way he carried himself both during his extraordinary career and after made him one of the most revered athletes of all time and earned him the respect of other Black athletes, including Muhammad Ali, who once said Aaron was “the only man I idolize more than myself.”

While Aaron was obviously embittered by the experience, he earned the admiration of the sporting world and is often regarded as much for the courage, dignity, persistence and resilience he displayed in that tumultuous year as he was for his outstanding baseball achievements.

“My hope is one day people will judge me by character rather than by the context of my colour,” Aaron recently said in a TV interview. “And I think when that day comes, that’s the day I’m going to say ‘Hallelujah.’”