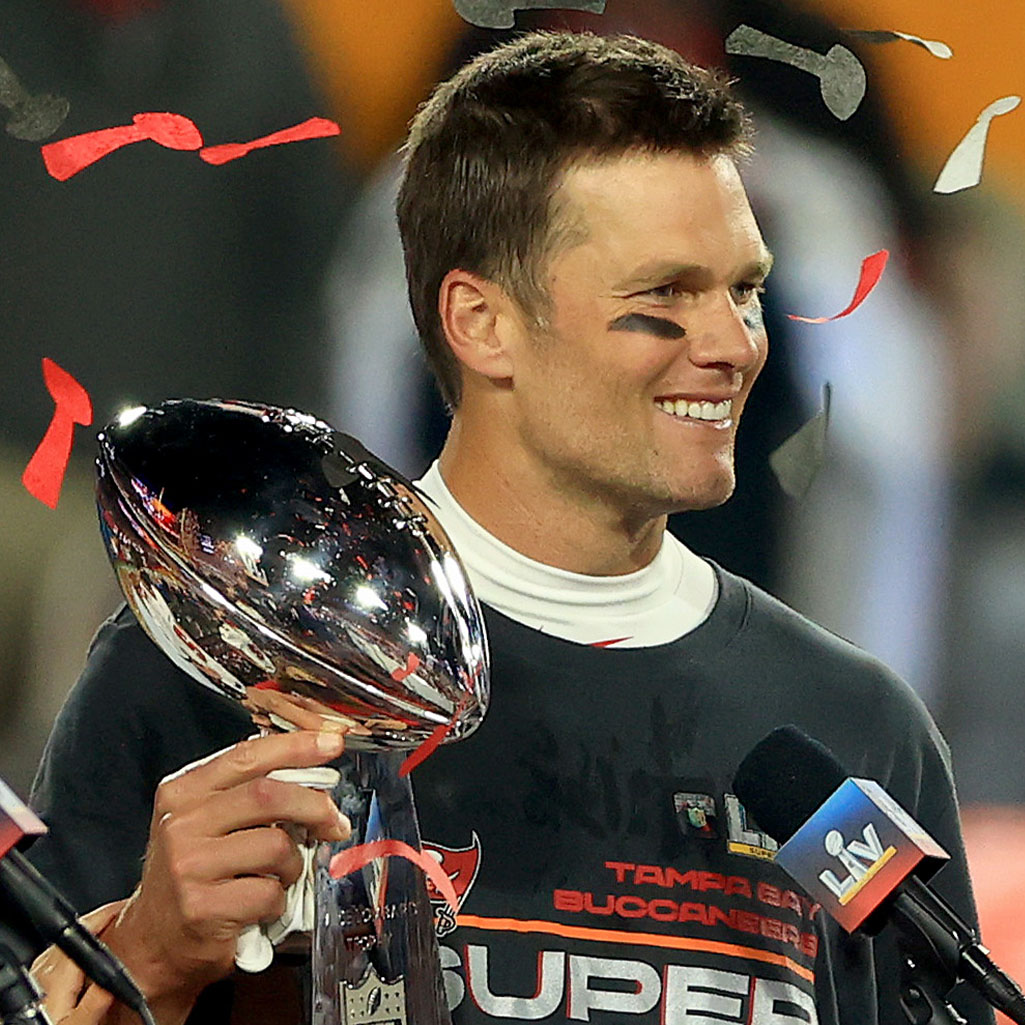 As the clock ticked down at Raymond James Stadium last night on the Tampa Bay Buccaneers Super Bowl victory over the Kanas City Chiefs, a familiar look flashed across the ageless face of Tom Brady.

The 43-year-old quarterback was putting the finishing touches on a virtuoso Super Bowl performance that saw him lead his underdog team to a dominating 31-9 thrashing of the favoured Kansas City Chiefs.

And as he lined his offence up in victory formation, it wasn’t hard to see that he was enjoying the moment. He had put in the hours of hard work in the gym and video rooms and, squeezed every ounce of his physical and mental powers to reach the summit of a sport that’s dominated by athletes half his age.

It’s a facial expression sports fans have become quite familiar with over the years, having watched Brady hoist the Lombardi trophy seven times now. It’s a look of pure joy mixed with contentment and perhaps a bit of relief.

But most of all, it’s an expression of vindication. Tom Brady was telling the NFL world and anyone else who cares to listen that no matter how old he is, he remains the undisputed GOAT. Not only did he surprise the world by winning the Super Bowl but he disproved the doubters and silenced the cynics who claim that on the field of athletic endeavour, or in life, youth always wins out.

You can bet Brady heard the whispers leading up to the game that maybe he’s getting too old. Don’t think that the media love-fest that developed around his 24-year-old opponent Patrick Mahomes went unnoticed. More than a few writers (guilty!) had the temerity to suggest it was time to pass the torch to the younger generation, the precocious, speedy, impossibly agile and rifle-armed kid from Kansas.

Last night, Brady proved for the millionth time that there’s no percentage in betting against him. And by leading his team to the Super Bowl, he not only cemented his hold on that torch but also didn’t look like a man who was ready to relinquish it any time soon.

It’s true that Brady may not be as young or as fast as Mahomes — or the rest of the new breed of young quarterbacks making their mark in the NFL.

But he knows how to win. He always wins. He’s been winning Super Bowls since he broke into the league at 21 — and he’s still winning them at 43. He truly is “Old Man Winner,” as the astute NY Post headline so aptly described him.

Even better, last night he shared the victory stage with his coach Bruce Arians who, at 68, left the comforts of the broadcast booth to come out of retirement and become the oldest coach to ever lead a team to a Super Bowl win.

Two older guys proving to the world that age and experience are assets rather than barriers to victory. And the fact they did it in Florida (a state with one of the highest percentage of seniors) made their astonishing accomplishment that much more satisfying.

But while older fans revel in his continued success, we also question how any of it is possible? How does this 40-something marvel continue to excel at this most physical of sports on a yearly basis? What lessons can we learn from Brady’s lifestyle that allows him to keep lifting Lombardi trophies and Super Bowl MVPs long after everyone has written him off? What super powers does he possess that allow him to keep turning back the clock? In effect, what we really want to know is: what makes Tom tick?

He Never Gives in to Age

Whether it’s trash-talking opponents, hugging teammates or throwing darts to his receivers, Tom Brady neither looks — nor acts — as one would expect of a 43-year-old. In a revealing 2018 Facebook documentary called the Tao of Tom, Brady revealed that his strategy toward dealing with age is to simply ignore it. “I don’t give a (expletive) about it,” he said, as if to suggest he can defy age simply by refusing to acknowledge its existence. According to this philosophy, instead of making age an excuse, he constantly focuses on improving rather than making age an excuse. “When I see myself out there I think, man I still do this and I do it better than I’ve ever done it. Why should I stop?” He’s already told the world he will be back to try to win another Super Bowl next year and is now suggesting he thinks he’ll play to 47!

Many athletes lose the desire to workout, learn new skills or adapt their style of play as they get older. It’s hard not to let complacency creep in over the years, especially when you’ve won multiple championships and set all the records. But for some reason, Brady never yields to this temptation. He has a seemingly unquenchable desire to improve every year, to find some area to grow, some new challenge to conquer. “There’s a warrior spirit about me. I’m always in competition — with myself,” he once said, trying to define the edge that makes him consistently great. It’s a similar spirit that led Joe Biden, at 78, to eschew the comforts of retirement and instead take on the physical and emotional challenges of leading the country. It’s a competitive fire that burns in successful people in other fields — business moguls like Warren Buffett, entertainers like Bob Dylan or older athletes like Serena Williams and Tiger Woods. Brady is as competitive now as he was when he won his first Super Bowl. His fire won’t die and it fuels him to remain at the top of his game.

Successful people never concede the possibility of defeat and are driven to live up to what others see as an impossibly high standard of perfection. They are eternal optimists who thrive on success and the sweet taste of victory. Brady uses the chase for success as motivation to get through tedious workouts, repetitive practices, hours of studying game film, the grind of travel and taxing daily media sessions. And his relentless focus on winning ultimately rubs off on his teammates. Coach Arians says that that before Brady came to Tampa Bay, the Buccaneers were a “talented football team, but we really didn’t know how to win.” He called Brady a “winner” whose focus on success “permeated through our whole locker room.” And he credits Brady’s win-or-nothing philosophy as the reason behind the teams turnaround. “Knowing that he’d been there and done this, our guys believed it. It changed our entire football team.”

He’s Obsessed with Fitness and Nutrition

After watching Brady show the world how a 40-plus year old athlete retains peak fitness and athletic levels, it’s inevitable that people will search out his secret. Brady’s genes might hold some of the clues: his three sisters all excelled at sports and he often refers to his sister Maureen as “the best athlete in our family.” Genetics aside, people looking for Brady’s fitness secrets don’t have to look any farther than his book The TB12 Method: How to Achieve a Lifetime of Sustained Peak Performance. In what is quickly becoming a Bible for high-performance athletes, Brady outlines his tips on functional strength and conditioning (he emphasizes stretching and pliability over lifting weights), proper hydration (he eschews alcohol and drinks gallons of water), cognitive fitness (he claims to do “brain exercises” that allow him to make “better decisions, faster”), restorative sleep (he’s in bed before 9 p.m.), and a diet that is heavily vegan, avoids dairy and trans fats and focusses on foods that are high in fibre and alkaline in favour of acidic foods, in order to balance his pH levels. While the diet seems to be working for him, some experts warn that regular people shouldn’t rush to adopt it, suggesting it’s expensive, difficult to follow and that some of the advice it contains (especially refraining from alkaloids) isn’t backed by science.

He Builds on Experience

A lifetime spent playing and studying the game, Brady’s ability to quickly recognize and respond to any schemes or gimmicks defensive co-ordinators throw at him is perhaps his strongest suit. There’s nothing that happens on the field that surprises him. He knows how to win and what it it takes to get there. But that doesn’t mean he ever stops honing his skills or adding to his wealth of experience. A student of the game, he studies more film and defensive schemes than any quarterback in the history of the game “The more I watch, the more I understand, the more information I can process, the better it is for me,” he once told a reporter of his legendary focus on adding to his knowledge. And, perhaps better than any athlete in the history of professional sports, he understands the importance of shutting out the noise and concentrating on the ultimate goal — winning. “The joys of winning are great but I sweep those under the rug so fast there’s a brief moment when I enjoy the experience of winning, and then I’m thinking about the next game. And I’m thinking about winning again.”