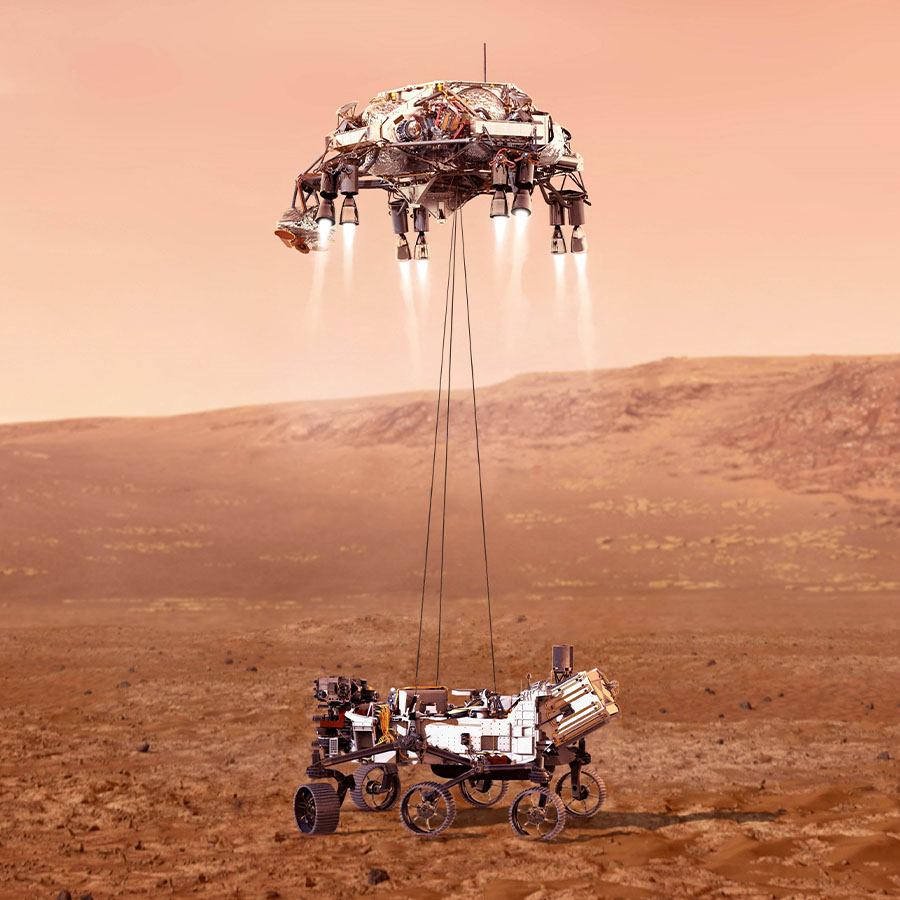 During times of great calamity, when life on Earth seems almost too much to bear, mankind has always looked to the heavens for answers.

Gazing upward to the skies during times of war, pestilence or famine over the millennia, we’ve prayed to God to intercede for us. If that doesn’t work, we’ve looked  elsewhere in the firmament — hoping that the answer lay in the alignment of the stars.

And while petitioning the heavens or following the stars hasn’t always provided a solution to our troubles, it never fails to offer a brief escape and welcome distraction from the craziness here on Earth.

That’s why the latest Mars landing couldn’t have come at a more auspicious time, as we push into the second year of a pandemic that has caused so much death and economic misery.

Once again, we’re seeking escape by peering into the heavens. The stunning video released by NASA this week of the Mars Perseverance Rover coming to rest gently on the Red Planet last Thursday (which you can watch above) has shifted our concentration away from the turmoil here on our own.

Watching the video of the Rover descending majestically to its landing point, it’s hard not to get caught up in the excitement of this extraordinary achievement echoed by a message on the module’s parachute, a binary-coded exhortation that read “Dare Mighty Things.”

Perhaps even more stunning than the videos that captured the event is the fact that it comes with a soundtrack. For the first time ever, we heard what the Red Planet sounds like.

If you click on the first track above, you’ll hear nothing — the sound of silence that one would expect from a barren planet. But listen closely again, and you’ll suddenly catch a mighty whoosh, the unmistakable sound of a gust of wind.

There’s something eerily unsettling yet entirely magnificent about being able to actually hear the wind blowing across the cold, barren landscape of Mars.

“These are really amazing videos,” said an enthused Michael Watkins, director of NASA’s Jet Propulsion Laboratory, which is managing the mission. “We binge-watched them all weekend.”

Like Watkins, it’s hard not to be awed by these images beamed back to us from more than 200 million kilometres away in space. This astonishing feat of engineering and science shows that we’re  still capable of accomplishing great things. I find it assuring that this spirit of discovery, to push the boundaries of exploration — to “dare mighty things” — is alive and well.

The overriding message behind this mission seems to be that while the pandemic may be causing so much death and leading us into economic peril, our spirit of curiosity and experimentation remains undaunted.

Who knows where this spirit will take us next? One place we’re already catching glimpses of is Jupiter, with NASA’s Juno mission beaming back stunning images of that planet as well.

The spirit that brought us to Mars is an echo of the same zest for exploration that fuelled our first tentative steps into the great unknown. The Space Age, a time of similar human achievement that began with the Russian satellite Sputnik slowly orbiting the Earth in 1957, paving the way to this week’s Mars landing.

The early astronauts, including Neil Armstrong — who would become the first man to ever step foot on the moon — understood well humanity’s endless appetite to conquer the next horizon.

“I think we’re going to the Moon because it’s in the nature of the human being to face challenges. It’s by the nature of his deep inner soul. We’re required to do these things just as salmon swim upstream.”

Armstrong’s quote may be  less well-known than his oft-repeated “One small step for Man,” but I think it’s far more insightful in that it captures the essence of why we can never sit still.

it also conjures up nostalgia for those first Apollo missions from the 1960s and early ’70s, and we get the same sense of excitement we got when the first crew landed on the moon.

Back then, we didn’t have a destructive global pandemic to deal with. But we did have the ongoing angst of living through a menacing Cold War between the U.S. and Soviet Union with those two bitter enemies aiming their massive nuclear arsenals at each other, and Canada placed squarely in the middle.

Although I was very young at the time, I can vaguely remember our family in front of our tiny television, watching the grainy, black-and-white footage of the moon landings.

I was amazed by the incomprehensible technology of the NASA control room — staffed entirely by men with brush cuts, white shirts and horned-rimmed glasses who sat in front of banks of primitive computers and nervously guided the mission from below.

Like all children, my brothers and I were delighted by footage of the  astronauts awkwardly bouncing around on the low-gravity surface of the moon. We’d try to emulate their slow-motion moonwalks off the floor of the pool during swimming lessons, much to the chagrin of the instructors. I also recall how these missions dominated adult conversation as well as the ubiquitous space-themed  paraphernalia that littered our house — T-shirts, ashtrays, lunch boxes and colouring books.

Amazingly, after six moon landings the whole concept of space travel gradually became almost commonplace, and our interest in the heavens waned. Over time, the missions became less and less absorbing, reaching a point of absurdity in February 1971 when astronaut Alan Shepard brought his six-iron to the moon and began hitting golf balls.

Besides, there were distractions back home that demanded our attention — the anti-war protests were tearing apart America, the Quebec separatist movement was becoming violent and Ali was set to fight Frazier — and life on Earth once again demanded our full attention.

The ensuing NASA missions, including the Shuttle and International Space Station missions, renewed our interest but never quite generated the same level of wonder everyone felt during the early days of the Space Age.

Long after he was retired, Shepard was asked what it would take to re-ignite our interest in space: “I guess those of us who have been with NASA … kind of understand the tremendous excitement and thrills and celebrations and national pride that went with the Apollo program is just something you’re not going to create again, probably until we go to Mars,” he prognosticated.

Well, we’re now going to Mars and, as Shepard predicted, the excitement is back. And once again, we’re finding solace by looking up toward the heavens.

Regardless of whether this mission discovers that there was life on Mars or leads to an eventual settlement on the distant planet, it’s affording us welcome relief from our earthly worries and reminding us of the wondrous capabilities of the human spirit.