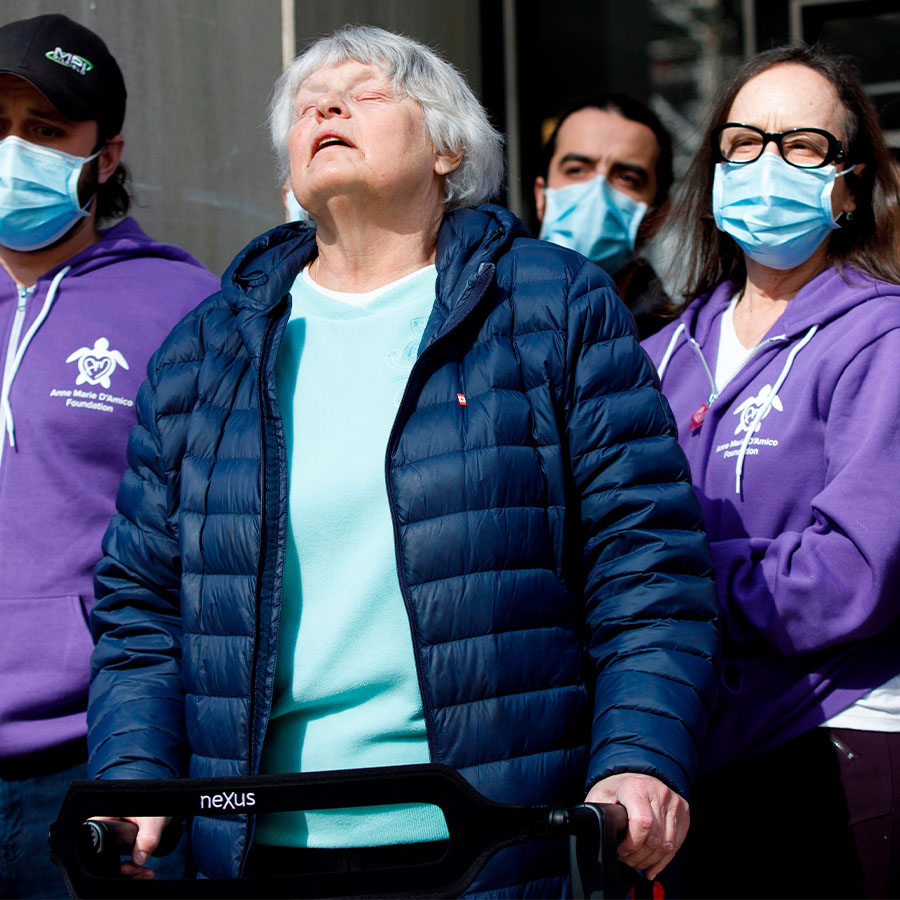 Cathy Riddell(C) speaks to the media as family and friends of victims of the 2018 deadly van attack gather outside the Toronto Courthouse in Toronto, Ontario, following the verdict in the trial of accused van attacker Alek Minassian, on March 3, 2021. Photo: Cole Burston / AFP/ Getty Images

Alek Minassian, the man behind the fatal Toronto van attack of 2018 has been found guilty of 10 counts of first-degree murder and 16 counts of attempted murder.

In a decision rendered today, Ontario Superior Court Justice Anne Molloy ruled that despite the fact that Minassian is autistic, his decision to drive a van through crowded sidewalks, eventually killing 10 and injuring 16 others, was “the act of a reasoning mind.”

Molloy, who referred to Minassian as “John Doe” throughout her statement, said she based her ruling on the fact that “Mr. Doe thought about committing these crimes over a considerable period of time and made a considered decision to proceed.”

Minassian, now 28, had pleaded not guilty to all charges. His trial, which began in November 2020, revolved around whether his autism rendered him incapable of making rational choices. Lawyers for the defence argued that because Minassian’s condition caused him to lack empathy for the victims, he was therefore incapable of making a rational judgements.

Molloy sternly rejected this argument. “It does not matter that he does not have remorse nor empathize with the victims. Lack of empathy for the suffering of victims — even an incapacity to empathize, for whatever reason — does not constitute a defence under Section 16 of the Criminal Code,” she said in her ruling.

The trial turned up evidence of the defendant’s long history of fantasizing about mass killing as well as his hatred of women. After his arrest, he told detectives that he was lonely and had fantasized about becoming a mass murder not only in order to seek revenge on women but also to gain notoriety.

The judge said that Minassian “knew it was morally wrong by society’s standards, and contrary to everything he had been taught about right and wrong. He then made a choice. He chose to commit the crimes anyway, because it was what he really wanted to do. This was the exercise of free will by a rational brain, capable of choosing between right and wrong.”

The decision was cheered by family members of the victims. Robert Forsyth, who lost his aunt Betty Forsyth in the van attack, told Global News, “I’m  happy with the decision, although it’s hard to use the word happy when you lose a loved one like this.”

Besides the families, the Ontario Autism Coalition praised today’s ruling, releasing a statement saying that it was “relieved that Alek Minassian has been found guilty for his crimes.”

“Violent traits have no connection to autism,” continued the statement. “In fact, people on the autism spectrum are far more likely to be victims as opposed to perpetrators of violence. The court’s decision makes it clear this was never a case of autism causing mass murder, but rather a case where someone who committed mass murder happened to have autism. An autism diagnosis does not predispose one to commit acts of violence. ”

Is Misogyny to Blame for Toronto Van Attack?

One Year Ago: Toronto Remembers The Shocking Van Attack That Killed 10