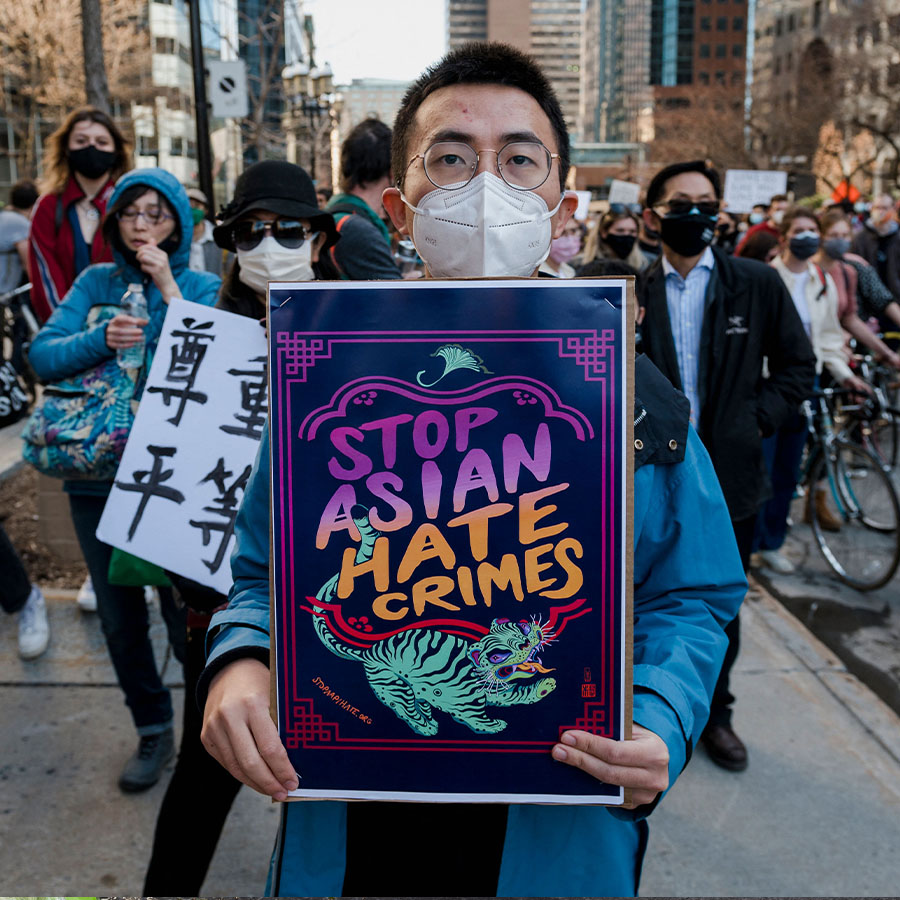 Thousands of demonstrators joined an anti-Asian racism rally in Montreal on Sunday to mourn six women of Asian descent who were killed in the Atlanta spa shootings last week. Photo: Andrej Ivanov/AFP via Getty Images

In the wake of last week’s horrifying Atlanta spa massacre where a gunman shot up three massage parlours taking the lives of eight people – six of whom were Asian –  demonstrators around North America took to the streets to remember the victims and decry the rise of anti-Asian hate crimes.

“We’ve come together to organize because our community is tired, is hurting and is angry,” said Karen Cho of the Progressive Chinese Quebecers at a Montreal Stop Asian Hate rally this past Sunday that attracted thousands. “We are a year into this pandemic and the Asian community has confronted so much hate.”

Cho also spoke about the fact that the pandemic has been a focal point of much of the anti-Asian sentiment that’s been brewing since the COVID-19 virus came to North America last year. “People in our community have been told to go back to their country, blamed for causing the virus, spat on and called racial slurs,” said Cho, referring to the spike in reported hate crimes.

Canadian-born actress Sandra Oh added her voice to a Stop Asian Hate rally in Pittsburgh, Pa. The 49-year-old Grey’s Anatomy star, who has Korean heritage, used a megaphone to explain the fear that is coursing through many Asian communities in North America.

“One thing that I know is that many in our community are very scared, and I understand that,” Oh said. “One way to get through our fear is to reach out to our community.”

While the 21-year-old Atlanta gunman claims that the motivation behind this crime was to eliminate businesses that gave an outlet to his “sex addiction,” spokespersons from the Asian community suggest otherwise.

“This is racially motivated sexual violence against women,” Sung Yeon Choimorrow, executive director of the National Asian Pacific American Women’s Forum, told ABC News. “The reason they died wasn’t just because they were women,” Choimorrow continued. “They were murdered because they were Asian American women.”

Besides the Atlanta shootings, the pandemic has ratcheted up levels of Anti-Asian attacks and hate crimes in Canada and around the world. The racist sentiment is thought to be based on the mendacious notion that any Asian – whether they’re of Chinese, Korean or Southeast Asian descent – is somehow responsible for the worldwide spread of the COVID-19 virus.

When he was president, Donald Trump was fond of blaming the spread of the pandemic on Chinese people, often referring to the disease as the “Wuhan Flu,” “Kung Flu” or “the Chinese Virus.” Mike Pompeo, Trump’s one-time Secretary of State, was even more direct, blasting China for being, “responsible for the spread of disease” and that they “must be held accountable.”

It’s no coincidence that since the pandemic began to disrupt our lives, careers and financial stability, some have made North American Asians the scapegoat, and the number of hate crimes reported against this community has skyrocketed.

A July, 2020 Statistics Canada report suggests that the number of ethnically based hate crimes have increased against all visible minorities but that those aimed specifically at Asians have tripled. The report found that the proportion of visible minority participants who perceived an increase in the frequency of harassment or attacks based on race, ethnicity or skin colour was greatest among Asian groups, with Chinese and Koreans reporting a 30 per cent increase, and those from the Southeast Asian communities reporting an 18 per cent increase.

Police in large Canadians cities are reporting similar findings. Vancouver Police reported that anti-Asian crimes grew last year from a handful to over 140 – a 717 per cent increase. And in Montreal, police noted a similar increase in anti-Asian hate crimes, including physical assault, threats and vandalism — many of which were related to COVID-19.

While the abuse often comes in the form of so-called microaggressions, such as verbal abuse, racial slurs, threats and derogatory remarks, it often crosses into physical abuse, including incidents where Asians were spit at, coughed on or pushed.

More worrisome is the fact that these hate crimes often become ugly and violent and, when they do, all too often the abuse is directed against elderly Asians.

In March last year, an unknown assailant shouted racist epithets, including COVID-19 comments, at a 92-year-old Asian man before shoving the senior to the ground outside a Vancouver convenience store.

“Everything about this assault and the behaviour of the suspect is despicable,” said Const. Tania Visintin, a spokesperson for the Vancouver Police Department. “As a police department, we do not tolerate incidents motivated by bias, prejudice or hate. It’s even more disturbing considering the victim’s age.”

In January, 2021, Vichar Ratanapakdee, an 84-year-old Thai immigrant living in San Francisco, was pushed to the ground and suffered severe trauma to his head, later dying of brain damage. “This wasn’t driven by economics,” Eric Lawson, Ratanapakdee’s son-in-law, told CNN. “This was driven by hate.”

In March, in another unprovoked daylight assault on the streets of San Francisco, 76-year-old Xiao Zhen Xie was punched in the face by an unknown assailant. The feisty Xie picked up a nearby stick and beat off her attacker, who ironically ended up in hospital. The assault not only caused massive swelling around Xie’s eye, but left her traumatized and afraid to go out.

And there have been other cases of violence directed towards elderly Asians. This shocking video shows an unprovoked attack on a 91-year-old Asian man, pushed to the sidewalk in broad daylight. In another alarming incident, an 89-year-old Chinese woman in Brooklyn, N.Y., was slapped by several assailants who then lit her clothes on fire. And earlier this year in Harlem, a 61-year-old Filipino man was horrifyingly slashed in the face with a box cutter.

Russell Jeung, professor of Asian American studies at San Francisco State University, says that these incidents, coupled with the Atlanta spa shootings, are shining a spotlight on anti-Asian racism for the first time. “Violence against Asian Americans in high-crime neighbourhoods has always been high,” Jeung told NBC News. “And so the combination of both the racism from last year and crimes against Asian elderly are now significant enough to get national attention.”

Whether it’s the Atlanta spa shootings or the increase in violent attacks against elderly Asians, many civil rights activists from the community feel it’s time the world learned about these all-too-real hate crimes. In a video that went viral soon after Ratanapakdee’s death, Amanda Nguyen, the founder of Rise Up, a social justice accelerator, deplored the fact that the mainstream media doesn’t take the issue seriously enough.

“We matter,” says Nguyen in the video. “Racism is killing us. Our community is being attacked and we are dying to be heard.”

The Atlanta Attacks Were Not Just Racist and Misogynist, They Painfully Reflect the Society We Live In