How W. Galen Weston Applied His Business Acumen in the Fight Against Age-Related Brain Diseases 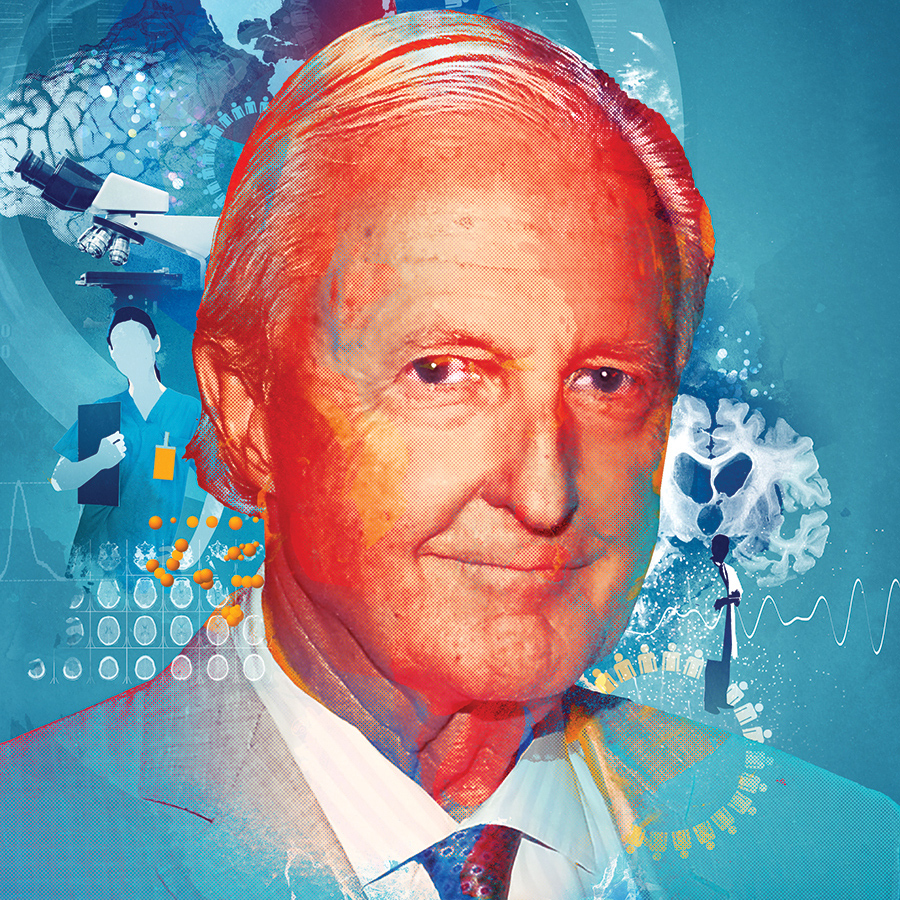 W. Galen Weston, patriarch of one of Canada’s wealthiest families and retail and grocery titan, died on Tuesday. In addition to leading a significant expansion of George Weston Limited, a prosperous empire founded by his grandfather, Weston also helped to develop the Weston Brain Institute, a foundation that continues to work towards treatments for age-related brain diseases, including Alzheimer’s, Parkinson’s and ALS.

Here, we revisit our Sept. 2014 Zoomer magazine interview with the leading business magnate, where he discusses how the institute grew out of his family’s tradition of philanthropy.

There’s an air of unselfconscious elegance about W. Galen Weston, a gentlemanly demeanour that puts people at ease. It’s an aura that well-suited his role as viceregal consort during his wife Hilary Weston’s term as lieutenant-governor of Ontario from 1997 to 2002.

On a mid-May morning in Toronto, a press conference is about to start in the 19th floor lobby of the food and drug conglomerate, George Weston Limited, of which he’s executive chairman. (Son Galen G. Weston has had his father’s old job as head of Loblaws, Canada’s iconic supermarket chain, since 2006 and recently added Shoppers Drug Mart to the mix.) Weston circulates easily among a throng of media, business associates, family members and neuroscientists, several of whom can be spotted on eye-catching posters and several large monitors, where they describe the research they’ve been engaged in, courtesy of grants from the W. Garfield Weston Foundation.

His parents had set up the foundation in the late 1950s, funded with lucrative shares of George Weston Limited, the family company that W. Garfield Weston had inherited in 1924. A canny businessman, Garfield had grown the Toronto bakery business into an international food empire that was particularly successful in the U.K., where he also established a Garfield Weston Foundation. (His son Galen would prove his business acumen in Ireland with grocery stores and, eventually, the Selfridges Group – upmarket fashion stores, among them Selfridges in the U.K. and Canada’s Holt Renfrew chain.) Garfield Weston’s children and grandchildren run the two private, very wealthy foundations; W. Galen Weston heads the Canadian-based one and sits on the U.K. foundation’s board.

“The work of the W. Garfield Weston Foundation has united our family across generations,” he later writes in an email. “My sisters and I, along with other family members, have been doing the work of the foundation since it started. We believe that because the funding for [it] came from the hard work of Canadians at companies like Loblaws and Weston Foods, the funds should be given back in Canada to improve the lives of Canadians.”

Weston admits to some shock when he realized his parents had created such a substantial foundation. “I guess I knew about it but really didn’t know where the money came from. Anyway, [my father] was a baker, and I guess a lot of people who liked bread kept eating it, so he took the money and got going with Banting and Best!” It was in 1960 that Weston Sr. had presented a gift of $1 million in person to Dr. Charles Best for diabetes research at the Banting and Best Institute at the University of Toronto. “He was proud of and very keen on the medical science of Canada,” Weston says.

It was the family through the foundation, however, that began investigating the issue of the frustratingly slow progress in finding cures or treatments for brain diseases of aging. “About four or five years ago, we were looking at the most pressing issues facing Canadians to see if we could help. We learned these are terrible diseases without cures or really effective treatments, and they affect a huge number of Canadians. Estimates suggest that today almost three million Canadians are patients or caregivers and that this number will increase to more than 16 million in one generation,” he writes.

Not surprisingly, the family took an entrepreneurial approach to the problem. “We leveraged some of the powerful business minds from George Weston and Loblaw companies, who helped us to apply rigorous business principles in order to develop an innovative operating model,” he says. They called on leading scientists – Canadian and international – to participate in the institute’s scientific advisory committee and the committee that assesses grant applications. Committee members expect innovation from the applicants and are eager to engage in feedback.

“We look for high-risk, high-reward research because that’s how we’re going to make big leaps forward in treatments, and that only comes through innovative work,” Weston says. They also want a cross-disease approach, to break down walls between areas of study and leave opportunities for “aha” moments that lead to progress.

“I’m a networker … and a silo buster,” Dr. Sandra Black, a cognitive neurologist at Sunnybrook Health Sciences Centre, says. “We work together brilliantly,” she says of Canadian neuroscientists. “That’s why we’re going to be leading the world in this field.” It’s chilling when Dr. Andres Lozano, one of Canada’s celebrated neurosurgeons and chair of the Weston Brain Institute’s scientific advisory committee, notes, “We have no way of stopping or slowing down the progress of these disorders.” He adds that thousands of potentially useful treatments gather dust in the research Valley of Death because there aren’t resources to test each one to find which works and which doesn’t. “We need to take more shots,” Lozano says. “If we shoot more pucks, more of them will score.”

The Weston Brain Institute just bought him a whole lot of pucks.