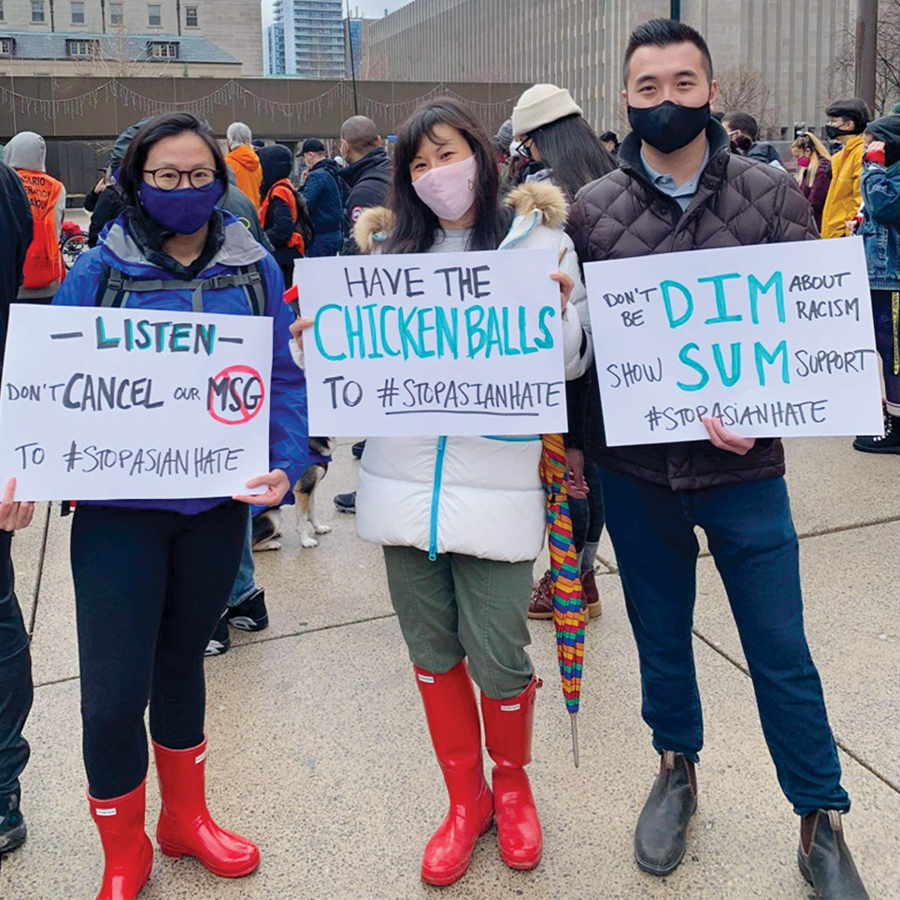 As anti-Asian violence accelerates, Pay Chen — above, centre, at an anti-Asian racism protest in Toronto in March 2021 — wants Canadians to educate themselves about Canada’s racist past, microaggressions and the model minority myth. Photo: Pay Chen

As anti-Asian violence continues to accelerate, Pay Chen beseeches Canadians to educate themselves about our racist past, microaggressions and the model minority myth.

I remember the first time someone made fun of me for the way I looked. I was seven or eight, and my class was in the school library hanging up our drawings. A girl came up to me and started saying, in a singsong voice, a racist rhyme that I had never heard before and didn’t understand. I remember smiling at her, happy that an older girl would play with me.

She ended by pulling her eyes back into slits, a gesture I didn’t understand either, and then she laughed. At first, I laughed with her, but I recall vividly the realization that I was the joke. I remember the heat on my face, how I was embarrassed and didn’t know why. She laughed and shouted more things I didn’t understand and I no longer wanted to hear. I took a book off the shelf and opened it, pretending to read, so she couldn’t see me cry.

I spent my early years in a Halifax working-class neighbourhood with a heavy sprinkling of immigrants. The kids in my school were mostly white, but I didn’t notice and, for the most part, neither did they. I asked my mom and dad — who still live there — if they had experienced racism since they emigrated from Taiwan more than 40 years ago. “No, we didn’t,” my mom, Pi-Yeng Chen, said over a FaceTime call, “but we would never tell you if we did.” And that sums up the general Asian experience: Keep a low profile, don’t complain, don’t make a fuss and try to fit in.

I didn’t see many faces like mine on TV when I was growing up, so I didn’t think working in front of a camera was a viable career goal. After graduating from Ryerson University in 1998 in Radio and Television Arts, I went on to work behind the scenes as a writer and researcher while applying for on-air positions, joking to my friends about whether the Asian quota was already filled on a show. Sometimes I would be told they were looking for someone “ethnic,” but a different type of ethnic, or that they already had someone of colour on the show (filled that quota!) so I wouldn’t be necessary.

Thankfully, the media landscape has evolved over the decades (although it still has a long way to go), and my first big opportunity was as a TV host on Omni Television — go figure, a multicultural channel is where I would be welcomed. I have since worked on-air as a host or guest expert on shows for the CBC, Global, CTV, CityTV and the Food Network, as well as acted on programs like Degrassi: Next Class, Ghostwriter, Kim’s Convenience and Star Trek: Discovery.

The recent spike in anti-Asian racism has garnered mainstream attention, but it’s not new; it’s just newer to people who aren’t Asian. Following the path of awareness and activism paved by the Black Lives Matter movement, racialized groups are coming together to raise their voices, demanding social justice. To see constant stories about violence toward Asian elders is particularly heart-wrenching, because I see my parents, aunties, uncles and grandparents in the victims. No matter their race, there is something particularly cruel about targeting the weakest and most vulnerable in society.

COVID-19 and the Rise of Anti-Asian Racism

The rise in anti-Asian racism started with COVID-19 and its origins in China, with the stigma cemented when then-U.S. President Donald Trump referred to it as the “Chinese Virus.” It became more difficult to shrug off when a gunman targeted three Asian businesses in Atlanta, Ga., on March 16, and murdered eight people, six of them Asian women. People have spoken out, saying things like, “we don’t condone racism here,” “racists are terrible,” and “I would never say or do racist things.” I don’t believe most people are racist, but I do believe most people have unintentionally said, done or thought racist things due to unconscious bias.

“Microaggression” has become a big word for me and my BIPOC (Black, Indigenous and people of colour) friends this past year. Until I read more about it and the “model minority” myth — a problematic stereotype that ranks Asians above other minorities due to our perceived success, willingness to work hard, and not raise our voices or push back — I had no idea how to describe the assumptions, questions, comments and stereotypes I’d become desensitized to in my lifetime. “Your name is hard for me to pronounce,” puts the onus on the other person to ease their discomfort, when learning how to say someone’s name is a sign of respect. “Where are you really from?” implies that the person, usually non-white, must be a foreigner when they — like you — might have been born here.

I’m grateful my parents landed in Canada, but many Canadians have a feeling of smug superiority when it comes to acceptance and tolerance. The implication that we are “better than” means we are quick to ignore the country’s troubling history of racism, including heinous treatment, discrimination and violence against Blacks going back to slavery in the 17th century, Indigenous Peoples that dates to European contact, Jewish people, Muslims and, of course, Asians.

After so many young Chinese men laboured (and died) building the Canadian Pacific Railway in the 1880s, Canada passed the Chinese Immigration Act in 1885 before the last spike was driven, imposing an exorbitant $50 head tax on those who wanted to move to this country. In essence it said: Break your backs, your spirit and your bodies to work on the railway that physically and symbolically united our country, but we will not accept you — you are not welcome here. The head tax was increased to $500 in 1903 — roughly the price of a house at the time — and on July 1, 1923, Canada passed the Chinese Exclusion Act, which banned most Chinese immigrants. This is why some Chinese Canadians refer to Canada Day as “Humiliation Day.”

Growing up in Nova Scotia, I never learned about the anti-Chinese riots in 1919, where several thousand soldiers and locals destroyed Halifax businesses owned by Chinese immigrants. The violent looting sent 100 people to hospital, and, while businesses asked the city to cover more than $8,000 in damages, they never received a cent in compensation.

After the Japanese attacked Pearl Harbor in 1941, Canada responded by invoking the War Measures Act in 1942 and detained more than 20,000 Japanese Canadians in British Columbia whose possessions, properties and businesses were sold to pay for their forcible confinement in internment camps until the end of the Second World War.

Those were different times. We’ve come a long way and we now see the benefit of a multicultural society. But let’s not turn away from our problems, because ignoring them allows them to continue. Lest you think anti-Asian racism is an American phenomenon, let me remind you of the 92-year-old Asian man with dementia who was shoved out the door of a Vancouver convenience store in March 2020, where he fell and struck his head. In April, police in Markham, Ont., arrested a 33-year-old man in connection with at least six hate-motivated attacks against Asian men and women between January and March.

A week after the Atlanta attacks, the Toronto chapter of the Chinese Canadian National Council released a report that detailed 1,150 anti-Asian racist incidents in Canada, mainly in Ontario and B.C., between March 10, 2020 and February 2021.  The majority — 76 per cent — involved verbal harassment, while one in 10 victims was coughed or spat on.

“An enduring theme of the racist attacks is that some, if not all, Chinese and Asian people are somehow responsible for the origin, let alone the pain and arrival, of COVID-19 in Canada,” the report states. “Irregardless (sic) of where it originated, pandemics represent the growing challenges of human development and the natural world — not any particular race or ethnicity.”

When I ask my mother, 69, about the increase in anti-Asian violence, she argues it’s not “most” people. She’s right, but this is the same woman who repeatedly had tips stolen from the food business she operated with my father, 82, in the decade before they retired this year. I would react with outrage, saying, “How could someone steal a tip jar from a business run by seniors?” And my mother’s reply was always forgiving: “They needed the money more than us.”

On Twitter and Instagram, I started following accounts by those who summarized the history of racial bias and the weight it carries. My father, Yi-Chiao Chen, adopted the English name Steven in his late 40s at the suggestion of a customer at the Halifax Farmers’ Market. It was just easier: He didn’t have to repeat it, spell it out or try so hard to say it clearly in his heavily accented English. I remember giggling with my younger brother when we heard people call him “Steve,” and he would occasionally answer, “Who is Steve?” When I posted this story on Instagram, one woman commented, “If we can pronounce names like Schwarzenegger, then we should be able to pronounce Asian/African names.” My mother, who goes by Yen because that, too, is just simpler, would say, “It’s easier for everybody.” Meaning if we make it easier for others, it becomes easier for us.

I have felt both heavy and uplifted this past year. Isolated from my family because we live in different provinces, and realizing the world is full of more hatred than anyone wants to admit, I felt devastated when the victims of racist violence were so often people like my mom and dad — just minding their own business, trying to make an honest living.

I feel hopeful when I see people of all backgrounds speaking up, taking action and learning from their unintentional mistakes. That’s key. I hope you look up at least one significant piece of Canada’s racist past that I’ve referenced here. You don’t need to be interested in history or anti-Asian racism to learn from this. You just need to have an interest in humanity, and I have to believe that’s most of us.

A version of this story appears in the June/July 2021 issue of Zoomer magazine, which is available on newsstands June 1.