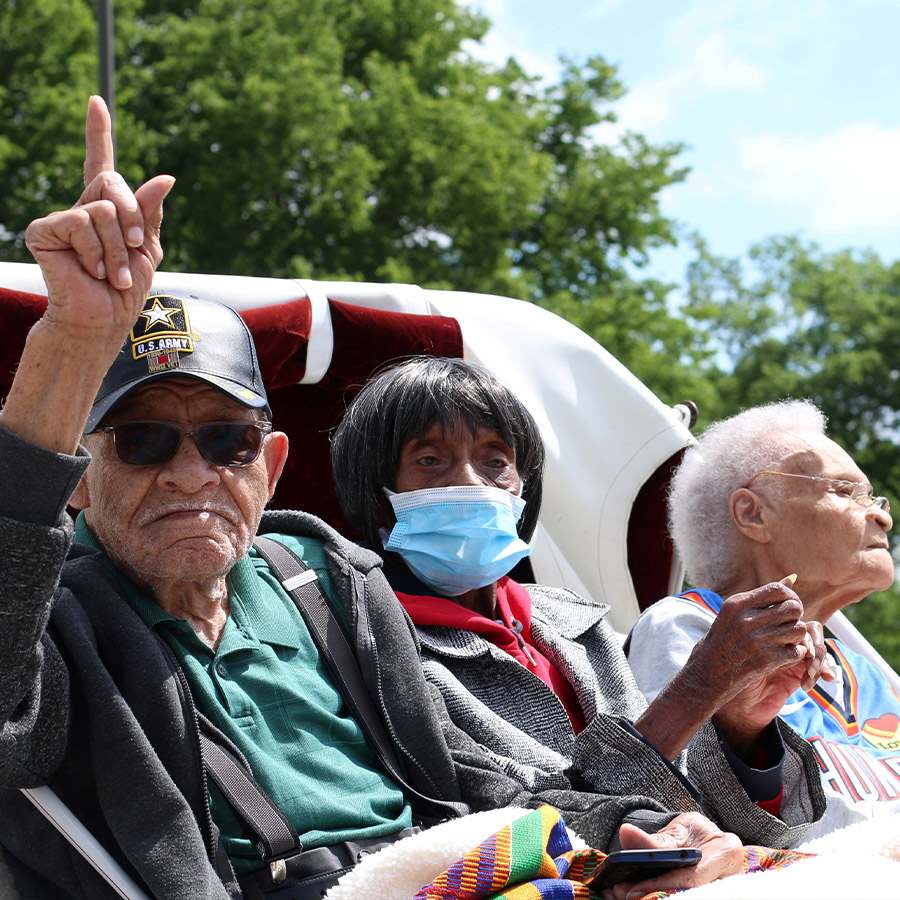 Lessie Benningfield Randle, 106, can still remember a house engulfed in flames and the bodies stacked in truckbeds, one hundred years later.

“I was quite a little kid but I remember running and the soldiers were coming in,” Randle said in an interview with Reuters as her hometown of Tulsa prepared to mark one of the darkest chapters in its history.

Monday is the centenary of a massacre targeting Tulsa’s prosperous African-American community in the district of Greenwood that bore the nickname “Black Wall Street.”

After a Black man was accused of assaulting a white woman, an allegation that was never proven, white rioters gunned down Blacks, looted homes and set fire to buildings block by block. More than 1,000 buildings were destroyed.

An estimated 300 people were killed, thousands were left homeless and an entire community that had been seen as a symbol of what Black Americans could achieve was devastated.

“This was the Mecca. Tulsa’s considerably what Atlanta is today,” said Duke Durant, 30, a comedian, actor and Tulsa native, referring to one of the U.S. cities noted for its large, thriving Black community.

Events related to the massacre commemoration began ahead of the anniversary.

Friday’s Black Wall Street Legacy Festival included a parade led by Randle and two other centenarian survivors, Viola Fletcher and Hughes Van Ellis. The three were joined by community organizations and about 450 students from George Washington Carver Middle School, where the parade began.

At the parade’s start, members of the African Ancestral Society surrounded a horse-drawn carriage holding the three survivors and sang blessings, before marchers headed past tidy homes toward the heart of Greenwood.

The commemoration is slated to include a visit by President Joe Biden on Tuesday and the unveiling of the $20 million Greenwood Rising museum.

The museum, which is devoted to telling the story of Greenwood, will not be completed in time for the centennial but there will be a “limited preview,” a Tulsa commission formed to commemorate the anniversary said on its website.

An event scheduled for Monday that was to feature a performance by award-winning musician John Legend and a speech by politician and activist Stacey Abrams was canceled following a dispute with lawyers for the three survivors, organizers said.

Organizers said they hoped to reschedule. A candlelight vigil is among the commemoration events still to take place Monday.

This year’s attention is a departure from the past. For decades, newspapers rarely mentioned the events of May 31 and June 1, 1921. The state’s historians largely ignored the massacre and children did not learn about it in school, according to a 2001 report written by a commission created by the state legislature.

Tulsans attribute the silence to a number of factors. Black Tulsans were traumatized, feared it could happen again and did not want to pass on the information to their children, while white Tulsans would not have wanted to believe respected members of their community participated, according to Phil Armstrong, the project director of the centennial commission, and Michelle Place, executive director of the Tulsa Historical Society and Museum.

Place said the 2001 report was written before it was too late.

“Many of those survivors of the race massacre were dying or had died so it was an effort to tell their stories and to remember that part of our history and not let it go to the grave, if you will,” Place said.

The history is also recorded in court records. Randle described the bodies and burning house she saw in a deposition in a lawsuit filed in February by survivors and descendants seeking justice for victims. Calls for reparations have long gone unanswered.

Greg Robinson, 31, a community activist and 2020 mayoral candidate, said he was pleased with the increased attention on Tulsa during the anniversary, but added that more work needed to be done to repair the damage.

“I’m glad to see people from across the country coming to understand the story of Greenwood,” he said. “But make no mistake about it, we have a very clear message that until justice is done, we have work to do.”