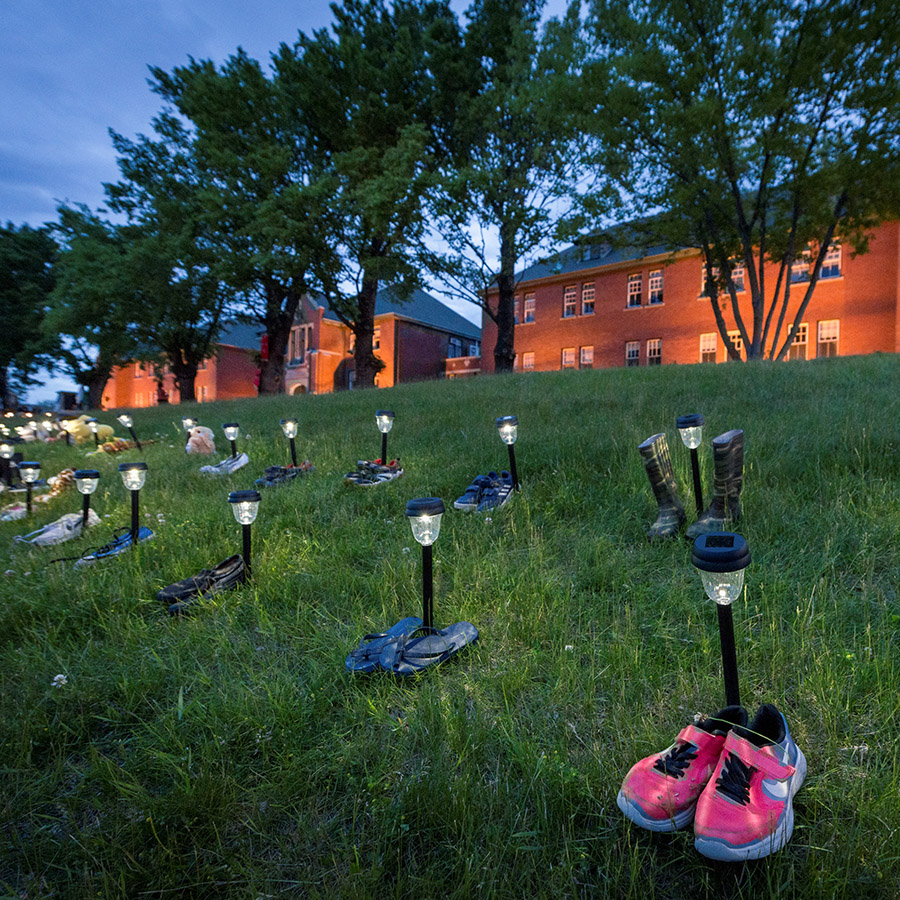 Pairs of children's shoes and toys are seen at memorial in front of the former Kamloops Indian Residential School after the remains of 215 children, some as young as three years old, were found at the site last week, in Kamloops, British Columbia, Canada May 31, 2021. Photo: Dennis Owen/Reuters

Indigenous groups in Canada are calling for a nationwide search for mass graves at residential school sites after the discovery of the remains of 215 children at one former school last week shocked the country.

Prime Minister Justin Trudeau said on Monday that searching for more mass graves was “an important part of discovering the truth” but did not make specific commitments.

Tk’emlúps te Secwépemc First Nation announced last week they had found the remains of 215 children, some as young as three years old, buried at the site of the Kamloops Indian Residential School, once Canada’s largest such school.

Between 1831 and 1996, Canada’s residential school system forcibly separated children from their families, subjecting them to abuse, malnutrition and rape in what the Truth and Reconciliation Commission tasked with investigating the system called “cultural genocide” in 2015.

Last week’s announcement sparked outrage, prompting flags to be flown at half-staff and people to lay hundreds of tiny shoes in public squares, places of government and on the steps of churches, in reference to the role of Christian churches from a range of denominations in running the schools.

There have long been rumours within indigenous communities, also discussed by the commission, of children buried at these schools.

The fourth volume of the commission’s report, titled ‘Missing Children and Unmarked Burials,’ identified 3,200 children who died at residential schools, about a third of whom were not named. Since that report’s publication in 2015, an additional 900 have been identified.

Parents “spoke of children who went to school and never returned,” the report reads.

A working group established by the commission in 2007 proposed, among other things, a study to identify unmarked gravesites. While the federal government initially denied the C$1.5 million needed to conduct this work, the government announced in 2019 C$33.8 million over three years for a ‘National Residential School Student Death Register’ and an online registry of residential school cemeteries.

Now there are renewed calls for Canada to do more to uncover what happened.

In meetings across the country, indigenous communities are working to figure out how to investigate, said Grand Chief Stewart Phillip, President of the Union of British Columbia Indian Chiefs.

“It’s absolutely essential that there be a national program to thoroughly investigate all residential school sites in regard to unmarked mass graves,” he said.