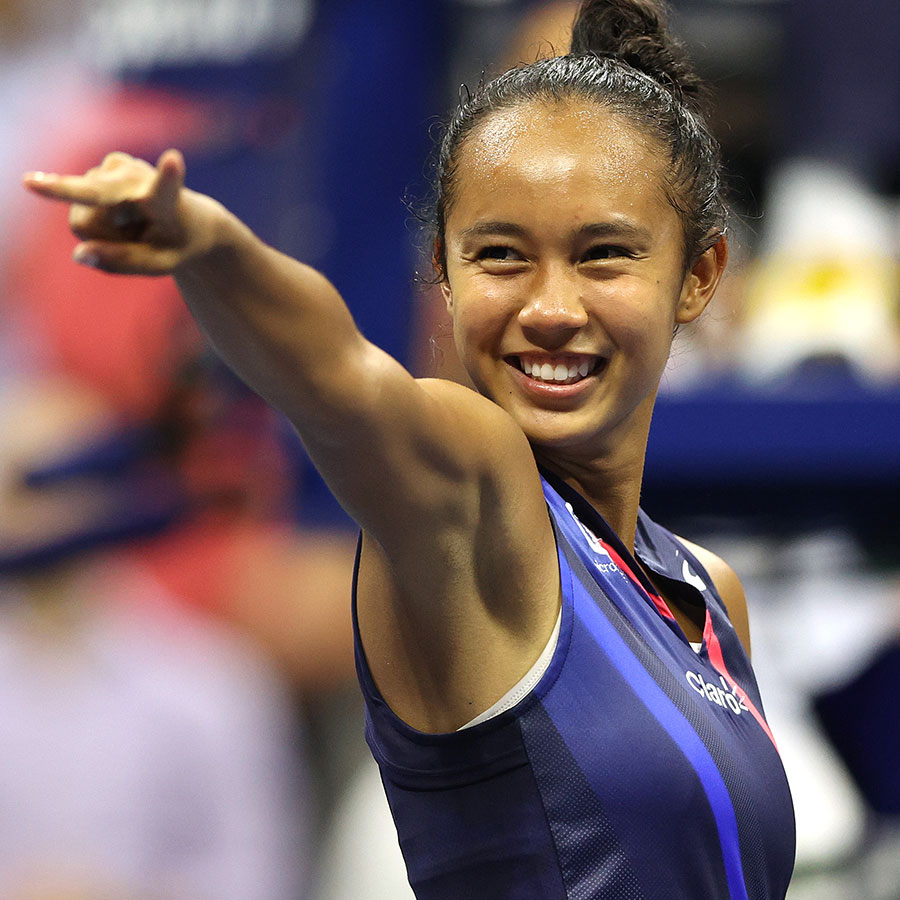 Fernandez, pictured here after defeating Aryna Sabealenka during her Women’s Singles semifinals match, will play Raducanu, who lives in Britain but was born in Canada, in the first Grand Slam final to be contested by two teenagers since the 1999 U.S. Open between Serena Williams and Martina Hingis. Photo: Elsa/Getty Images

It will be the Big Apple battle of teenagers in Saturday’s U.S. Open final after Britain’s Emma Raducanu became the first qualifier to reach the title clash at a major, joining Canadian Leylah Fernandez as the duo continued their giant-killing spree.

The final under the lights at the colossal Arthur Ashe Stadium between Fernandez and Raducanu will be the first major final in the Open Era across both the men’s and women’s game to feature two unseeded players.

It will also mark the first Grand Slam final to be contested by two teenagers since the 1999 U.S. Open between Serena Williams and Martina Hingis.

Both Raducanu, 18, and Fernandez, who turned 19 this week, were yet to be born then.

“We first encountered each other because I was born in Toronto and she was Canadian, so we kind of, like, made a little relationship back then,” said Raducanu, whose parents moved to England when she was two-years-old.

“But, yeah, then I played her at junior Wimbledon. Obviously since then we’ve both come very far in our games and as people. Yeah, I’m sure it’s going to be extremely different to when we last encountered each other.”

Raducanu will be hoping for a similar outcome, though. The pair’s previous meeting came in the second round of the Wimbledon juniors in 2018, when Raducanu won 6-2 6-4.

Fernandez was the first to book her spot with yet another upset on Thursday as she took down second seed Aryna Sabalenka 7-6(3) 4-6 6-4 in the first semi-final.

Raducanu wasted little time joining her, wrapping up her contest against Greek Maria Sakkari 6-1 6-4 in 84 minutes to become the first British woman to reach a major final since Virginia Wade won Wimbledon in 1977.

Playing in just her fourth tour-level tournament, Raducanu has not dropped a set in New York – the first woman to make the U.S. Open final without dropping a set since German Angelique Kerber in 2016.

“Honestly I just can’t believe it. A shock. Crazy,” she said, beaming her ubiquitous smile. “To be in a Grand Slam final at this stage of my career, yeah, I have no words.”

Their fearless tennis has endeared both to the fans, and the crowd will have a tough choice deciding who to back on Saturday.

“They are both young. They play fearless. They have nothing to lose playing against us,” said Sakkari. “I have to give credit to both of them, both of the young girls, that they take their chances. They’re out there fighting for that title.”

A win in the final would see Raducanu jump to 24th in the rankings, a massive climb after starting the hardcourt major ranked 150th in the world.

Left-handed Fernandez, who can make her top-20 debut by winning the U.S. Open, has been no less impressive.

The Canadian has shown she can beat anyone, with victories here over four-times major winner and U.S. champion Naomi Osaka, three-times Grand Slam winner Kerber and fifth-seeded Elina Svitolina in the quarter-finals.

She looked at sea against the power of big-hitting Sabalenka at the start of that match, but soon found her groove as her Belarusian opponent squandered her chances.

It was her third win in four matches against top-five players in the world.

“Like my dad would tell me all the time, there’s no limit to my potential to what I can do,” she said. “Every day we just got to keep working hard, we got to keep going for it.

“I think I’ve been doing some things incredible. I don’t know. It’s like I think one word that really stuck to me is ‘magical’ because not only is my run really good but also the way I’m playing right now.”

(Writing by Sudipto Ganguly in Mumbai; Editing by Ossian Shine and Toby Davis)