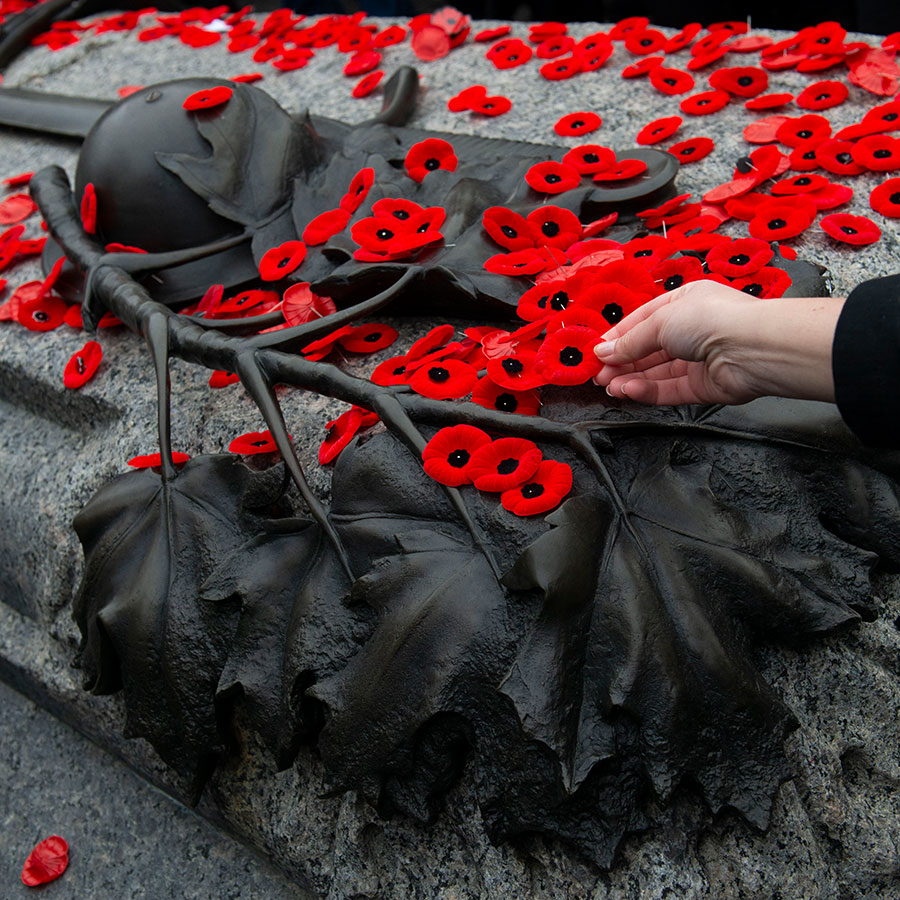 A poppy is placed on the Tomb of The Unknown Soldier following a Remembrance Day ceremony at the National War Memorial in Ottawa today. Photo: Sean Kilpatrick/The Canadian Press

Politicians, spectators, veterans and active military personnel gathered at the National War Memorial in Ottawa today for the national Remembrance Day ceremony, a chance to pay their respects to those who died in service to their country.

Prime Minister Justin Trudeau marked the day with a video statement ahead of the ceremony, where he spoke of the veterans who were injured or made the “ultimate sacrifice for our freedom, our peace and our democracy.”

“We owe so much to those who bravely serve, to our veterans, to the fallen and to the families who love and support them,” said Trudeau.

This year’s ceremony saw a loosening of the COVID-19 restrictions that banned spectators and severely limited the number of participants from taking part in the 2021 service. Despite the relaxed restrictions, there was still a smaller gathering of watchers, veterans and military personnel than in pre-pandemic years.

The service was actually delayed for 10 minutes after  a suspicious package was found at the memorial, prior to the ceremony. RCMP officers investigated the package and declared the area safe.

The scare interrupted the arrivals of Trudeau and Governor General Mary Simon, forcing a reordering of the ceremony’s events. As well, the national anthem and “Last Post.”

After the two minutes of silence, the Prime Minister was joined by his wife, Sophie Grégoire Trudeau, and the Governor General in the wreath-laying ceremony. This year’s Silver Cross Mother, Josée Simard, also laid a wreath on behalf of all Canadian mothers who have lost a son or daughter to war. Simard, from Les Méchins, Que., lost her daughter, Cpl. Karine Blais, who died at the age of 21 in 2009 while serving in Afghanistan, when the armoured vehicle she was driving struck an  explosive device.

Simon, Canada’s first Indigenous Governor General wore the uniform of the Royal Canadian Air Force to the event. In a statement today, Simon highlighted the 70th anniversary of the Battle of Kapyong, which saw a First Nations battalion earn the U.S. Presidential Unit Citation for distinguished service.

She also stressed the importance of learning the stories of soldiers, both past and present.

“Though some stories may be hard to hear, it is our responsibility to bear witness,” Simon wrote in the statement. “Our hope is that by recalling past sacrifices, we can look to a peaceful future. It is up to all of us. It is in our hands. It is our duty to keep the memory alive.”

Indigenous veterans were excluded from laying wreaths during Remembrance Day ceremonies until 1995, but Norton told CBC News that previous requests to lay a wreath were met with silence.

“I’m humbled,” said Norton. “It’s, I guess, a sense of pride being able to stand beside those who we trained with, those who we served with instead of being segregated.”

According to CBC News, legion member Angie Hallman reached out to Norton to “address the exclusion of Indigenous veterans after a year of reckoning on truth and reconciliation.”

“I’m filled with so much hope that this is [a way] forward, this is the first of many,” Hallman told CBC News.

“For me, walking side by side, as a settler, as a Canadian, with the indigenous people is something that I see as a path forward [to] reconciliation.”

This year marks the 100th anniversary of the poppy campaign in Canada. Buying and wearing the symbolic pin not only honours the Canadians who died in battle, but the campaign also raises $20 million each year to support veterans and their families, says the Royal Canadian Legion.

Commenting on the 100th anniversary of the campaign ahead of Remembrance Day, Steven Clark, national executive director of the Royal Canadian Legion, said that while the poppy has changed in appearance, the importance of distributing them remains as important and relevant as ever.

“The practice of distributing poppies for individual wear will never change because remembrance is a very personal thing,” said Clark.

Lest We Forget: Each Year, Three Canadian Medics Who Served in Afghanistan Take Stock of Their War

Lest We Forget: The Fortitude of Women