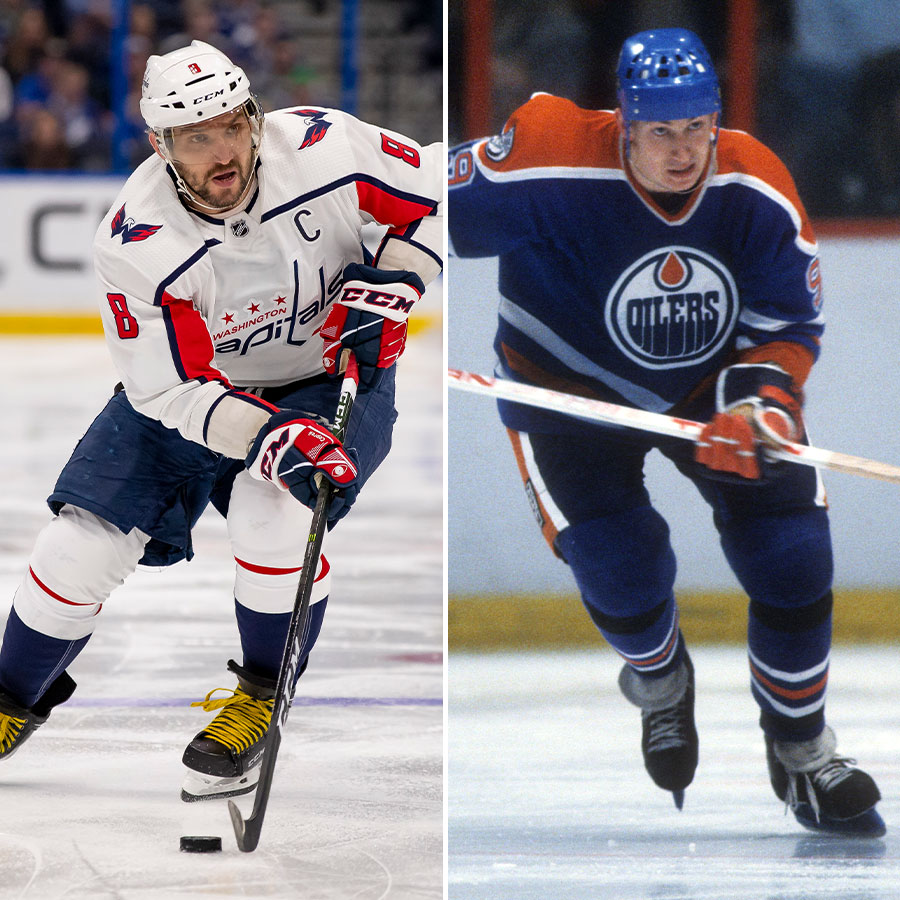 At the end of the day, Alexander Ovechkin could wind up the NHL's all-time greatest scorer, while Wayne Gretzky remains the best offensive player ever. Photo: Alex Ovechkin (L) in Tampa, 2019 (Icon Sportswire / Getty); Wayne Gretzky in Philadephia, 1982 (B Bennett / Getty Images)

As Alexander Ovechkin inches ever closer to Wayne Gretzky’s NHL goal-scoring record, his chase is fuelling a generational battle on social media.

Every night, it seems, the Russian scoring machine pots one or two goals in his amazing chase to break Gretzky’s scoring record of 894 goals — a hallowed mark that many hockey fans thought would stand forever, cementing No. 99 as the best scorer of all time.

Ovechkin, who is second in the league this year with 19 goals, now sits at 749, only 145 short of Gretzky’s all-time mark. And if he maintains his torrid scoring pace, the “Great 8” is on  pace to surpass the “Great One” in less than three years. At 36, the Russian superstar has never looked so good. He’s still one of the league’s top snipers and never seems to get injured, despite being one of the games most physical players.

Ovechkin’s assault on the record has younger fans voicing the heretical opinion on social media that, maybe, he’s actually better than Gretzky. If Ovi sets a new record, shouldn’t he be considered the greatest of all time?

On the one side, you have the young Ovi adherents, who say their generational star is the undisputed champ. Their arguments generally go something like this:

To which fans (like myself) who grew up watching Gretzky smash scoring records, reply: How dare these callow youth besmirch the reputation of our all-Canadian hero? Ovi is good, to be sure, but it’s a sacrilege to even mention him in the same breath as Gretz. We won’t hear a word against our generation’s superstar!

The social media debate (if you can describe it as such) revolves around the argument that Gretzky achieved his magnificent scoring totals against inferior goaltenders than the ones Ovechkin faces. And, unfortunately, it’s getting increasingly harder for us oldies to counter this line of reasoning.

Modern goalies are indisputably better than their puck-stopping predecessors. Back in the ’80s, when Gretzky was amazing us with his scoring prowess (he once netted 92 goals in a season), goalies were often the worst athletes on the team. Slow and small in stature, the goalies of that era eschewed training and their diet regimens leaned heavily toward pasta, washed down with beer. Their equipment, too, was primitive at best — small leather pads that restricted their movement and barely offered any protection.

Today’s NHL goalies, on the other hand, are all giant men who cover most of the net. The advantage their physical stature gives them is further supplemented by modern lightweight, water-resistant equipment (ridiculously inflated goalie and shoulder pads) they wear, which allows them to block shots while barely moving.

The disparity between goaltenders from the two eras is actually quite comical. In this photo below, Billy Smith — considered one of the best goalies in the ’80s — might be mistaken today for an undersized and out-of-shape beer-league player, wearing equipment several sizes too small. Ovechkin would likely have scored a 100 goals a year playing against goalies like this.

Compare Smith to Robin Lehner (below), a modern-day mask-wearing behemoth, whose massive body and football-sized shoulder pads allow him to obscure all but a small portion of the net, even while he plays the entire game kneeling on the ice. Would Gretzky have racked up the scoring numbers if he had to face goalies like the Michelin Man every night?

So Who’s the Best?

Before young Ovechkin fans rush to declare victory, they should at least acknowledge that the game has changed so much over the course of decades. Gretzky starred in an era that was much more physical and had to battle through the holding, slashing and mugging tactics that are simply not allowed today. Ovechkin doesn’t have to deal with any of that.

As well, for most of his career, Gretzky played with one of those old and cumbersome wooden sticks. Basically a heavy piece of lumber. Would he have added to his goal totals if he had access to the lighter, whip-like hybrid sticks — weapons that afford the shooter much greater accuracy and velocity — that Ovechkin uses?

Alas, it’s unlikely. Because even the Great One himself freely admits that it was easier to score when he played. “The game itself is better today than it was in the ’80s,” Gretzky said in this 2019 interview. “It’s tougher to score now. I played in the right era.”

It stands to reason that if Ovechkin breaks the record he will probably go down in history as the best pure goal scorer of all time. Ovi is bigger, stronger, faster than Gretzky, and has a much harder shot.

That, however, doesn’t mean he should be regarded as the greatest player of all time. Because even if you erased every goal that Gretzky scored, he’d still have more total points than next closest player. In terms of complete offensive mastery, Gretzky is still the best — by a wide, wide margin.

If and when Ovechkin breaks the record, he should rightly be considered the best pure goal scorer ever while Gretzky will always remain the best offensive player of all time.

That’s a distinction even the crustiest of us old hockey fans can live with.

As the Puck Drops on a New NHL Hockey Season, Will the Stanley Cup Finally Return to Canadian Soil?

As Jim Hughson Retires From “Hockey Night in Canada” Where Does He Stand Among the Top Hockey Voices of All-Time?