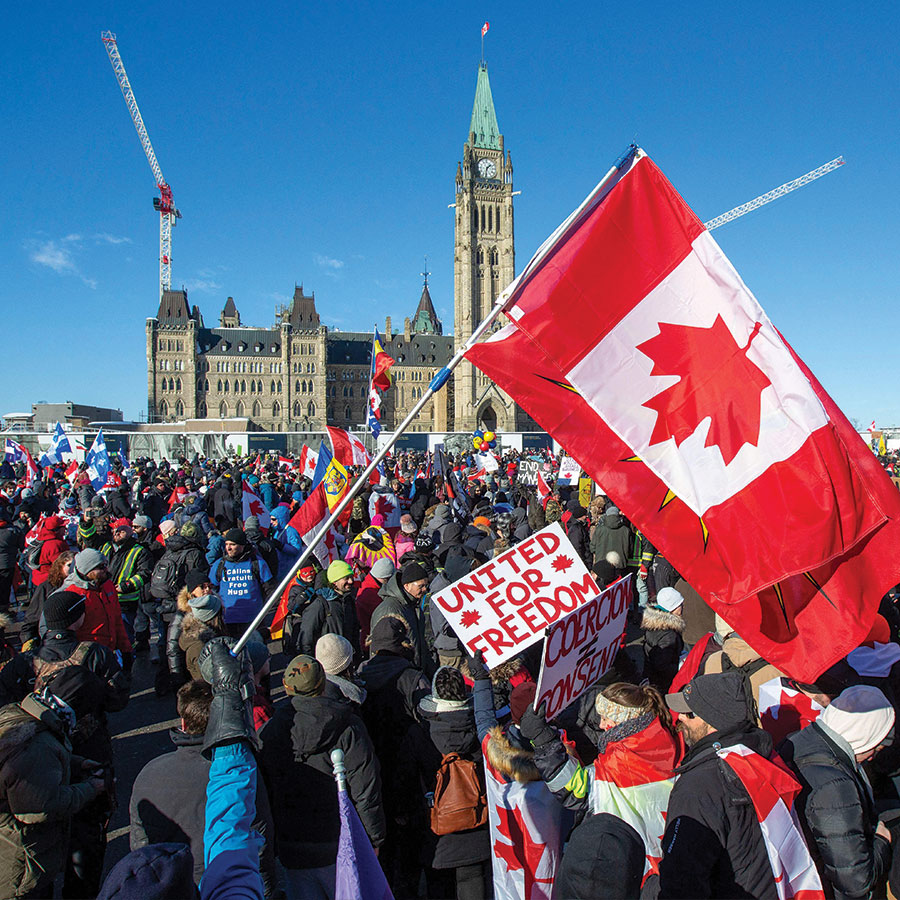 Dozens of trucks and other vehicles blocked the downtown area of Ottawa for a second day after thousands descended on Canada’s capital city on Saturday to protest against Prime Minister Justin Trudeau and COVID-19 vaccine mandates.

Trucks remained parked on the streets near parliament on Sunday, a day before lawmakers are due to resume work after the holiday break. Hundreds of protesters were out on Sunday, too. Some truckers said they will not leave until the mandate is overturned.

Former U.S. President Donald Trump, speaking at a rally in Texas on Saturday, praised the Canadian protesters for “resisting bravely these lawless mandates”, in a sign the politicization of the pandemic seen mostly south of the border has spread north.

In solidarity with the Ottawa rally, truckers and protesters have blocked a Canada-U.S. border crossing in southern Alberta, police said on Twitter.

In Ottawa, thousands gathered peacefully on Saturday and there were no arrests, though several incidents are now being investigated by police.

“Several criminal investigations are underway,” Ottawa police said on Twitter, including for the “desecration of the National War Memorial” and “threatening/illegal/intimidating behaviour to police/city workers and other individuals”.

One protester was filmed dancing on the war memorial – the tomb of the unknown soldier – and flags bearing swastikas were seen in the crowd. A downtown mall shut down because protesters refused to wear masks.

Michael Cooper, a Conservative lawmaker who handed out coffee at the protest, was pictured standing near a Canadian flag bearing a Swastika during a TV interview. He later released a statement condemning the “reprehensible” protester on Twitter.

Canada’s top soldier, Chief of the Defence Staff General Wayne Eyre, denounced a woman filmed dancing on the tomb of the unknown soldier, saying he was “sickened.”

“We do not condone any disrespectful behaviour,” the official Facebook page for the rally said on Saturday.

The demonstration started out as a protest against a vaccine requirement for cross-border drivers, but turned into a demonstration against the Trudeau government with a strong anti-vaccination streak.

Due to security concerns, Trudeau and his family left their downtown Ottawa home on Saturday. Earlier this week Trudeau said the convoy represented a “small fringe minority” who do not represent the views of Canadians.

About 90 per cent of Canada’s cross-border truckers and almost 79 per cent of the population has had two COVID-19 vaccine shots. Canada is now in the middle of a spike in Omicron variant cases that is straining hospitals.

Transport Minister Omar Alghabra ruled out reversing any of the mandates on Sunday.

“Vaccines are our best way to protect ourselves and our economy from COVID-19,” Alghabra said in an interview with the CanaBC. “It is unacceptable to see the swastika being flown anywhere,” he added.

Canada’s Conservative Party supported the protest, which aimed a lot of its anger — in signs and chants — directly at Trudeau. The right-wing People’s Party of Canada, which holds no seats in parliament, turned out at the rally.

“We are super-spreaders of freedom,” People’s Party leader Maxime Bernier said in a speech on Saturday.

Ottawa Mayor Jim Watson said some protesters had harassed a soup kitchen, demanding free meals because their refusal to wear masks meant they were not to order in restaurants, according to an interview with the CBC.

“You have the right to protest, you’ve had your protest, please move on,” Watson said.