As Canada’s Women Defeat the U.S. to Reclaim Hockey Gold, We Look Back at the History of This Bitter Olympic Rivalry 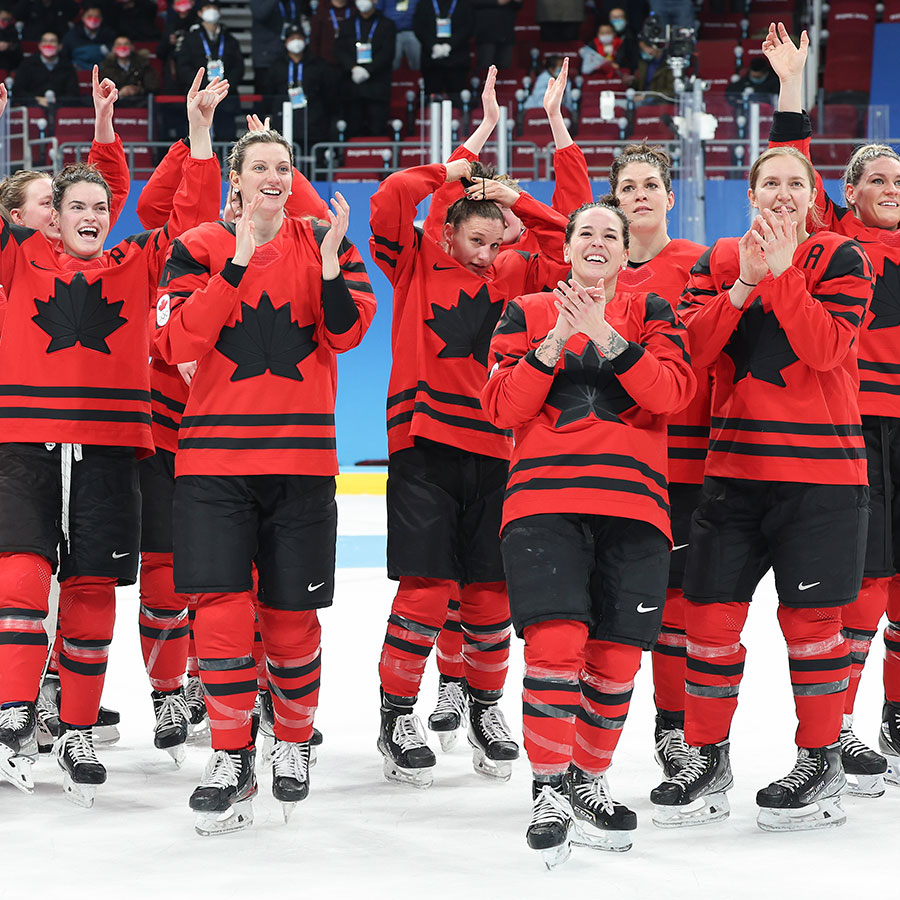 Team Canada celebrates on the ice after their 3-2 win against Team United States in the Women's Ice Hockey Gold Medal match at the Beijing 2022 Winter Olympic Games on Feb. 17, 2022. Photo: Lintao Zhang/Getty Images

Canada’s women’s hockey is on top of the world again after defeating the U.S. 3-2 in the gold medal game in Beijing winter games last night.

Canada jumped out to an early 3-0 lead and then held on as the U.S. mounted a comeback that ultimately fell short. With goalie Renee Desbiens stopping 38 pucks, captain Marie-Philip Poulin scored twice and Sarah Nurse added another to help Team Canada reclaim the gold they had lost to the U.S. in the 2018 games in PyeongChang.

“Coming off of 2018 and having that silver medal, it felt like the weight of the world on our shoulders,” said Sarah Nurse, who had a goal and an assist in the game. “And having this gold, it’s gonna feel as light as ever.”

Poulin, who continued her penchant for big-game heroics by scoring the winning goal – amazingly, her third career Olympic game-winning tally – was overcome with emotion after the victory. “It’s just so good. It’s a great feeling. It was one hell of an effort. This is redemption,” she said.

Last night’s result is just the latest in a long line of closely fought gold-medal games. Because the two squads are so evenly matched and inevitably play each other in the final, over the years they’ve built up a healthy dislike for the other.

This acrimony spans all the way back to the 1998 Nagano Olympics when the U.S. women surprised everyone by defeating Canada, thereby snatching eternal bragging rights by becoming the first team awarded a gold in women’s hockey.

The rivalry has only grown in intensity over the years, culminating in 2002 when several prominent Canadian players said they were motivated to win after hearing reports that the U.S. women had stomped on the Canadian flag in the dressing room.

Although the U.S. women denied the allegation – and a subsequent investigation cleared them of any wrongdoing – the flag flap only turned up the heat on this feud.

Let’s look back on the past gold medal games and this incredible hockey rivalry.

The Olympic rivalry is born at the 1998 Olympics, the first games that feature women’s hockey as medal event. Much to the horror of Canadian fans, the U.S. wins the inaugural gold medal by shutting down Canada’s offence, en route to a 3-1 victory.

Revenge is sweet for the Canadian women as they even up the series with a spirited 3-2 win, with Hayley Wickenheiser taking home the tournament MVP. The victory is made even sweeter because the gold medal is awarded to Canada on U.S. soil.

Unlike the U.S., Canada successfully defends home-ice advantage and captures gold. In front of the largest crowd to ever watch a women’s hockey game, Marie-Philip Poulin scored both goals to lead Canada to a 2-0 win.

Often called the best women’s game ever, this back-and-forth thriller sees the U.S. cough up a 2-0 lead late in the third period. Poulin, who always saved her best performances for the most dramatic times, scores in overtime to cap off a crushing 3-2 victory over the U.S.

The U.S. breaks Canada’s winning streak by turning the tables with a come-from-behind victory. This time, the U.S. was trailing late in the third period when they tied it up. After a scoreless overtime, the U.S. wins in a shootout. That 3-2 victory sets the stage for the gold medal game in Beijing.

Does it Hurt More When We Lose a Hockey Game to the U.S.?

As the Beijing Winter Olympic Games Get Underway, the Spotlight Shines on China’s Human Rights Record