Kith and Kin: The Community Spirit of Giving Together and Making Philanthropy More Accessible 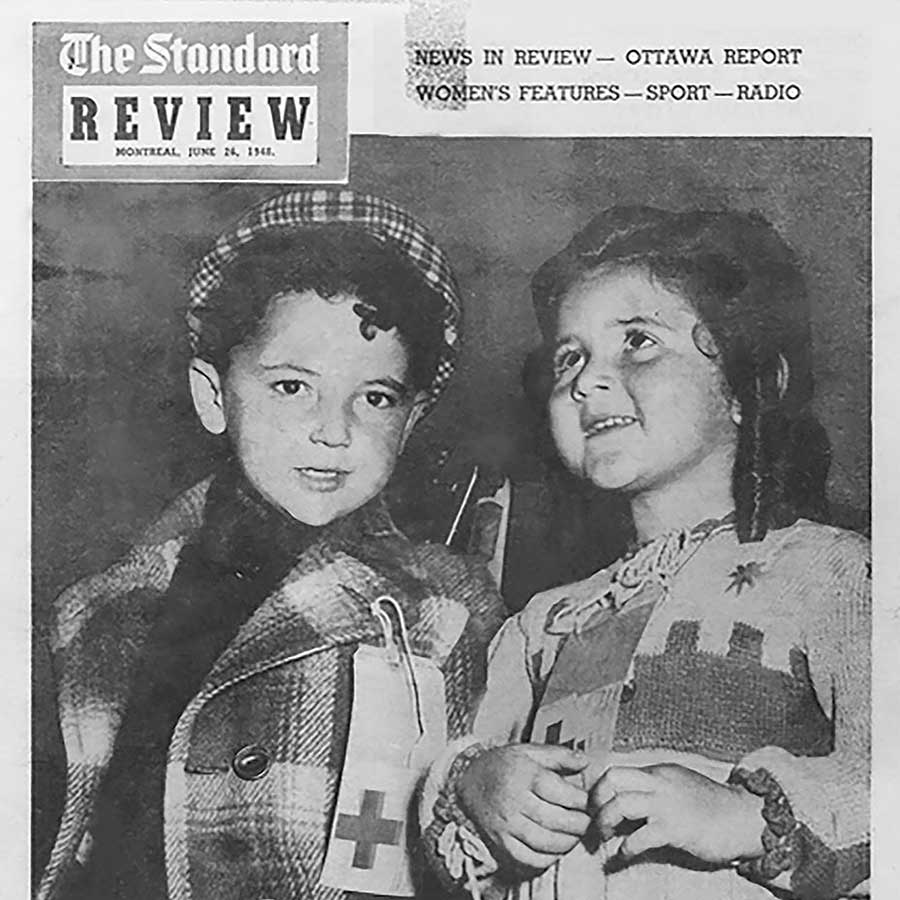 Five-year-old Moses (left) with Nasha Rosenberg, photographed as they arrived with their families by ship at Pier 21 in Halifax, 1948. The photo appeared on the cover of The Standard Review with the caption, “DP’s With Future.” Photo: Courtesy of the Author

It’s a piece of family history we’re trying to unearth. In the meantime, it may inspire a charitable commitment my brothers and I will make as a family.

It started with a letter the Jewish Immigrant Aid Service (JIAS) Toronto sent to Moses (founder and CEO of ZoomerMedia). “Given your family history and connection to JIAS, we would love to find a meaningful way for you to be engaged in our 100th anniversary.” This raises the question: What was our family’s connection to JIAS?

Our parents, Chaya and Aron, and Moses landed in Halifax aboard the SS Falcon on June 26, 1948. They proceeded to Montreal, where our father’s first cousin lived. They’d been living in a displaced persons camp in the American Zone of Occupied Germany. When the war ended, they escaped the Soviet Union, where they had found a precarious refuge, and where they met, married and had Moses after the Nazis overran their respective homes in Poland and Latvia. Chaya and Aron had planned to return to their homes, but there was nothing and no one to go back to.

Canada’s shameful record turning away Jewish refugees during the Holocaust is well known. Those policies were liberalized after the war, allowing the sponsorship of European Jewish refugees through programs to bring in close relatives and workers. Between 1947 and 1955, Canadian Jews sponsored and resettled 35,000 Holocaust survivors and their dependants. JIAS had a leading role in that work.

Our parents prided themselves on leaving us an inheritance, and we started making charitable donations in their honour shortly after they died. The first recipient was an obvious choice. All three of us frequently used Montreal’s Jewish Public Library when we were growing up — more importantly, so did Mom and Dad, especially when they went back to school after retirement. Since then, we’ve supported Jewish cultural events, cancer charities, the Holocaust film Prisoner 88, among others. The idea of doing it together is as important as the deed itself.

The money is deemed to be donated and you get a tax receipt for the full amount as soon as you set it up. Then you can take your time deciding how to allocate the money. Private foundations have to pay for investment fees and management, accounting, taxes and audits. A community foundation does all the administration for a fee. Started in 1914, it was the brainchild of lawyer Frederick Harris Goff, whose idea was to develop charitable endowments that would be flexible enough to respond to changing community needs.

Which brings us back to JIAS Toronto. I was surprised when executive director Elise Herzig told me that still, nearly 60 per cent of the organization’s clients are Jewish. They come from countries including Turkey, Mexico, Brazil and Israel, and they may more likely need help with social connections rather than more basic assistance. These days, JIAS is engaged in helping a different, profoundly traumatized community – the Yazidis, the victims of a genocide perpetrated by ISIS. JIAS has also sponsored more than 200 refugees from Syria, Iraq, Rwanda and Eritrea. They are preparing for the next wave from Afghanistan and, as of this writing, there are also thousands of Ukrainians fleeing their country. They will likely need the same type of assistance that our parents did.

We want to know if JIAS helped Mom and Dad learn English or find work or housing, or to address their emotional needs as they recovered from genocide. It was not difficult to find friends with the same experience. Montreal became home to the world’s third-largest community of Holocaust survivors outside of Europe. That was the community we grew up in. Our parents shielded us from the trauma of losing everything, and now we are trying to recover the information. “We’re working on it,” Elise said. In the meantime, she is asking us to pay it forward by helping the immigrants and refugees of today.

Whoopi Goldberg Suspended From &#8216;The View&#8217; Over Holocaust Remarks