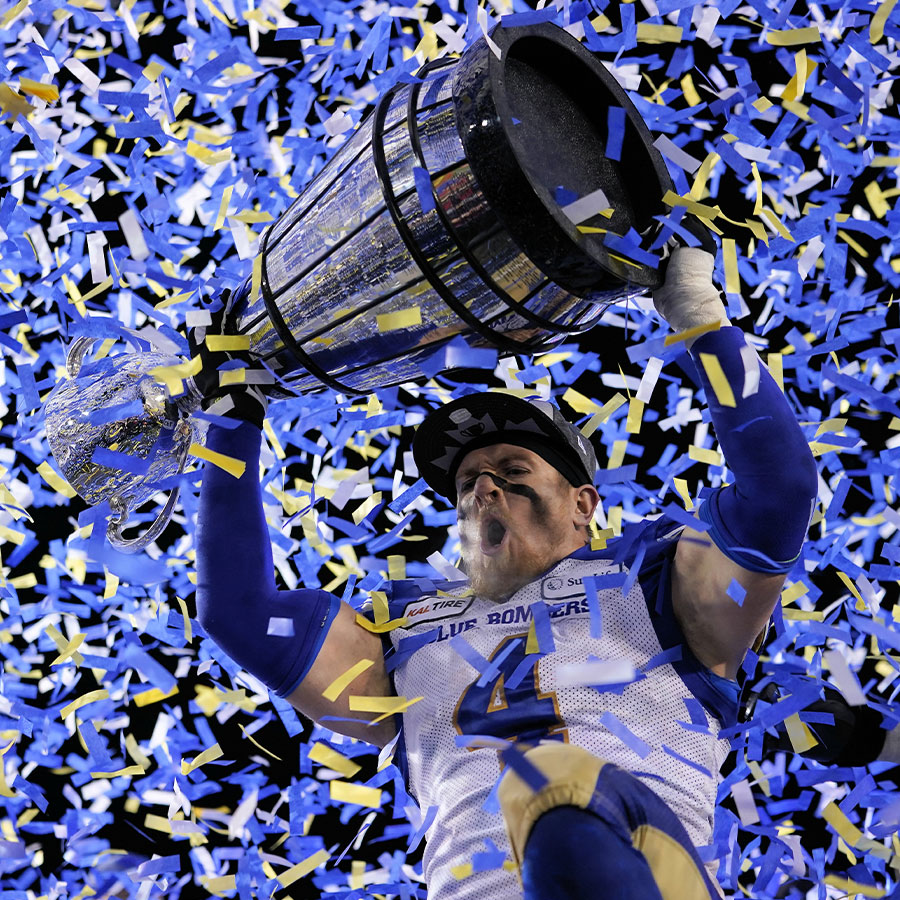 Adam Bighill, No. 4 of the Winnipeg Blue Bombers, celebrates with the Grey Cup after a win over the Hamilton Tiger-Cats at McMahon Stadium in Calgary, Nov. 24, 2019. Photo: John E. Sokolowski/Getty Images

The Toronto Argonauts and the Winnipeg Blue Bombers will renew an ancient rivalry when they face off in the 109th Grey Cup, this Sunday in frigid Regina.

Led by all-star quarterback Zach Collaros, a stingy defence and a roster that seems stacked at every position, the Blue Bombers had the league’s best record (15-3) and are favourites to win the Grey Cup for the third year in a row.

After several years of fielding listless and losing football squads, the Argos have rebuilt the team around quarterback McLeod Bethel-Thompson and a bruising running attack, a one-two punch they hope will deliver the franchise’s 18th title.

Although the Bombers and Argos are old rivals, Sunday’s game will be the first time they will meet in the Grey Cup since 1950. The odds against two teams (in a nine-team league) not meeting in the Grey Cup for over 70 years seem incredibly remote, especially considering that between 1937 and 1950 the two clubs dominated Canadian football and faced each in the title game six times.

And the Bombers are still looking for their first Grey Cup victory over their old nemesis, having lost all six previous title games to the Argos.

As we prepare for this year’s match, let’s look back at the one-sided history between the two clubs.

The first-ever Grey Cup matching of Toronto and Winnipeg ended in a hockey-like score of 4-3. Strong winds at Toronto’s Varsity Stadium wreaked havoc with the passing and kicking games of each team. The only scores came from field goals and singles as the Boatmen recovered a fumble late in the game to seal the victory.

Going into the game, Winnipeg seemed  ready to avenge their 1937 loss, with their over-confident coach Reg Threlfall boasting: “we’ll cut ’em off at the knees and they’ll look like boy scouts.” Instead, it was Toronto who won in a blowout, led by rookie Red Storey, who scored three touchdowns.

As the Second World War ended and soldiers returned from overseas, Toronto hosted Winnipeg in that year’s Grey Cup. And, as in prewar years, the Argos won once again, pasting the Bombers 35-0. The festive crowd pelted the teams with snowballs and stormed the field before the game was even over. After the game, Winnipeg coach Bert Warwick praised the Argos, declaring that Toronto’s backfield, “was powered by greased lightning.”

“Bombers Are Trampled,” declared the headline of the Windsor Daily Star, as the Argos, led by Joe Krol, once again crush the Western opponents. This vintage footage of the 1946 game gives viewers a chance to seem some classic old-time football.

A thrilling match that went down to the last seconds, the Argos overcame a nine-point deficit, scoring in the last minutes to snatch victory from the jaws of defeat. The Argos had been accused of being a lazy team, prompting this epic comeback from Toronto coach Ted Morris: “My boys will show them who’s lazy on the field, where it counts.” This game marked the last time the Grey Cup was won by a team stocked with Canadian players only.

A heavy snowfall followed by a thaw ruined the field at Varsity Stadium. The pitch became a sodden bog filled with ruts, making play almost impossible. One sportswriter described the miserable conditions: “Because the field was like a pig’s wallow, what should have been a football classic turned into a slogging show.” In a game that was eventually dubbed “The Mud Bowl,” the Argos prevailed once again.