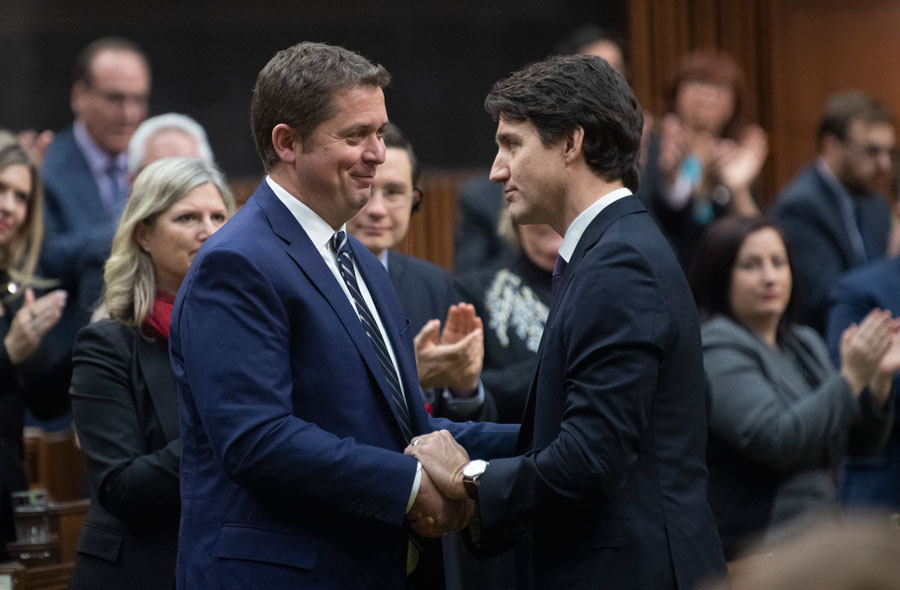 Prime Minister Justin Trudeau shakes hands with Andrew Scheer after he announced he will step down as leader of the Conservatives. Photo: Canadian Press/ Adrian Wyld

The political demise of Conservative leader Andrew Scheer can’t help but evoke the mental image of a rock and a hard place.

Some party insiders reportedly felt Scheer’s socially conservative beliefs were “out of step” with a majority of Canadians.

Meanwhile, anyone who’d spent any time on social media leading up to the Oct. 21 federal election couldn’t help but run across right-wing “supporters” who were furious about his attempts to soft-peddle those beliefs, particularly on LGBT issues and abortion (he said he was against both, but wouldn’t re-open the debate if elected).

For all that, Scheer was determined to hang onto the leadership. But he finally tapped out when it was revealed that party donations were being used to pay for his kids’ private-school tuition. Conservative party officials said it was “proper procedure,” and part of the cost of moving his family to Ottawa. Still, it was elitist mud that could be flung the next time around.

But here’s another irony of Scheer’s one-and-done term as Conservative leader. Scheer, born in 1979, is 40, on the tail end of Gen X, and almost in millennial territory (the largest demographic group of voters). Add those dimples, and you could easily see him being “carded” at a bar.

This is an awkward age to be the leader of a party whose best shot of being elected was “if turnout drops and young voters stay home,” according to pollsters prior to the Oct. 21 election, which saw an almost two per cent decline in voting across the board.

You can understand the thought process behind the nomination of Scheer as party leader. Politics is still largely the country of old men. And looking at Justin Trudeau, the Conservative old guard might have said, “Well, let’s put up some young pup, too.”

But a young leader doesn’t necessarily mean hip. Just being Green (and having a reputation as a bit of a party animal) gave Elizabeth May a cool cachet. NDP leader Jagmeet Singh and Prime Minister Justin Trudeau both carry themselves with a well-practiced public panache.

Scheer, on the other hand, displayed an awkwardness with people. In August, the candidate posted pictures of himself on Twitter, shaking hands with Torontonians in a park. They were the weirdest-looking arm’s-length handshakes, as if he, or the recipient, couldn’t wait to break contact and break out the hand sanitizer. Bear in mind, these pictures were chosen by Scheer’s handlers themselves. Looking at them, you had to imagine the ones that didn’t make the cut.

It’s not as if the CPC has ever passed itself off as a “huggy” party. Former PM Stephen Harper’s version of a public display of affection with his sons was stiffly shaking hands with them.

But geniality – and a photogenic physicality – has always had a way of burnishing faux pas and scandals. In many ways, this election was a bonfire of inanities, a guy who’d once dressed in brown- and blackface versus a secret American and fake insurance broker. And when you’re not sure what you’re voting for anymore, the electorate tends to revert to high-school mode and pretend it’s electing a class president. We just can’t help ourselves.

I often joke that, where the Conservatives are concerned, I’m just about ready to vote for Bill Davis. For those without long memories, he was premier of Ontario for 14 years from 1971 to 1985. His term capped 42 straight years of Conservative rule in the same province that, this year, practically put up a brick wall between Scheer and 24 Sussex Drive. (Of 121 seats the Liberals won to form a minority government, 79 were in Ontario).

Theoretically, bland would also work to Scheer’s advantage. But Davis would also bend when necessary to maintain power, even embracing socially progressive programs like rent controls. In other words, he would never stand a chance of becoming a Conservative leader today.

There was also the factor of Ontario’s honeymoon with Premier Doug Ford – if there ever was one – being long over, with many votes cast against Scheer’s party as surrogate anti-Ford.

The CPC – twice removed from its predecessor, the Progressive Conservatives – strangely has much in common with the U.S. Democratic Party. Both attach purity tests to their candidates that the opposition doesn’t, making it virtually impossible for the entire party to get behind one candidate. (We could cast People’s Party of Canada leader Maxime Bernier in the spoiler role previously played by presidential candidate Bernie Sanders.)

And both the Democrats and the Conservatives ended up with a plurality of the popular vote in the process of losing, albeit with significant concentrations of supporters in the wrong places, due to the vagaries of both electoral systems (California and New York for the Dems in the U.S., the prairie provinces for the Conservatives in Canada).

Scheer was accused of not offering specifics on everything from his environmental policy to how he’d eliminate the deficit.  His real crime was, as possible successor Peter McKay put it, “missing an open net on a breakaway” – i.e. losing an election that should have been a slam dunk. It’s possible older conservative voters weren’t buying his Alex P. Keaton act. In any case, the rumblings to dump him began on election night.

The Conservatives may decide what they missed in the “youth equation” was a political name. So, bring on Caroline Mulroney.

But bear in mind, save for a period in the ‘00s, the federal Liberals had an almost Machiavellian reputation for doing exactly what it took to win. Pierre Trudeau, the Prime Minister’s father, won an election campaigning against wage-and-price controls, and then implemented them after he was elected in 1974.

So, as they dump this erstwhile wannabe Prime Minister, Conservatives might remember the words of another American-born man, Ralph Waldo Emerson. “A foolish consistency is the hobgoblin of little minds… Speak what you think now in hard words, and tomorrow speak what tomorrow thinks in hard words again, though it contradict everything you said today.”

That’s a man who knew how to get elected.

Who Sings Andrew Scheer’s Campaign Song “Get Ahead”?