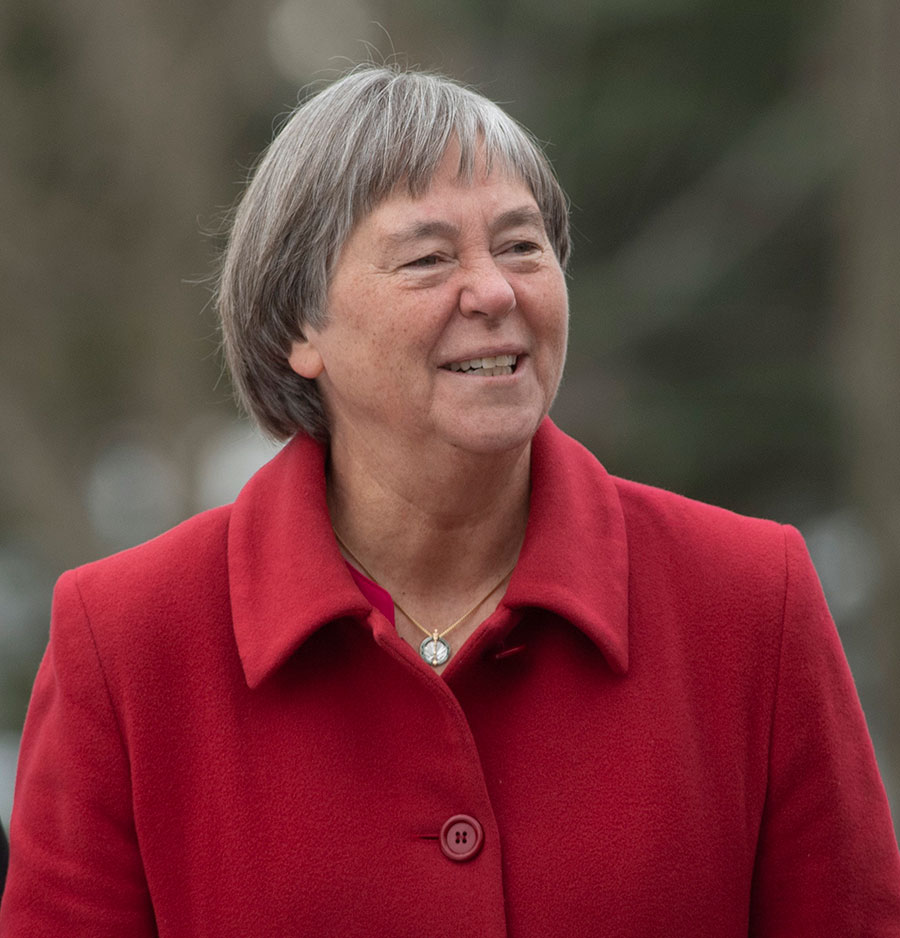 Seniors Minister Deb Schulte, arriving for the swearing-in of the new cabinet at Rideau Hall in November 2019, has promised to be a champion for seniors in cabinet. Photo: The Canadian Press/Adrian Wyld

When Deb Schulte landed the role of Minister of Seniors in November 2019, she caught many political observers off guard.

Few had tabbed Schulte, who has represented the King-Vaughan, Ont., riding since 2105, for the position. A relatively anonymous MP, she was perhaps best known for holding the dubious distinction of occupying the desk furthest from the prime minister’s, putting the “back” in backbencher.

But Schulte, an aerospace engineer by trade who has reinvented herself as a hard-working, results-orientated politician, appears ready to take flight in her new role as the voice of Canada’s 6.5 million seniors in the federal cabinet.

Landing a seat for seniors at this country’s most powerful table is not something that older Canadians should take for granted. It wasn’t that long ago that governments didn’t even bother with a dedicated seniors ministry. In fact, Schulte is only the second Minister of Seniors ever. The first, Filomena Tassi, was appointed in July 2018.

In previous governments, the seniors file was dumped on the Minister of Social Development, whose portfolio included families and the disabled along with other miscellaneous responsibilities. In 2007, Prime Minister Stephen Harper acknowledged the growing population of 65-plus Canadians by appointing a Senator, Marjory LeBreton, to the role of Secretary of State for Seniors.

In 2011, as Canada’s older population swelled, the government finally responded by assigning MP Alice Wong to the role of Minister of State for Seniors, a junior position without much heft to it. Though this was hailed at the time as an important leap forward, as a junior minister, Wong had little in the way of staff or resources and a somewhat limited voice in cabinet.

Despite winning the support of seniors in the 2015 election, Prime Minister Justin Trudeau waited three years before installing Tassi as Seniors Minister with full ministerial powers. Tassi was shuffled to Labour when Trudeau revealed his newly elected government’s cabinet, paving the way for Schulte.

Marissa Lennox, CARP’s Chief Advocacy Officer, says that it’s important that the government has created a full cabinet position that’s committed to seniors issues. “Having a minister solely responsible for seniors ensures that policies concerning health care and financial security are looked at through a senior’s lens,” she says.

Schulte’s overarching role as Minister for Seniors was laid out in the PM’s December 2019 mandate letter: “You will help the government better understand and make decisions on the needs of Canadian seniors and ensure that programs and services are developed that respond to Canada’s aging population. You will also support Ministers on initiatives across government that impact seniors. This will provide Canadian seniors and future retirees greater security and a better quality of life.”

With a vast and varied constituency of older Canadians, this promises to be a challenging responsibility. Recently, we spoke with Deb Schulte by phone, giving her the chance to introduce herself to older Canadians and provide an overview on how she envisions her role as Ottawa’s point-person for Canada’s seniors.

Deb Schulte: I always say, I wasn’t born rich but I was born lucky. I moved to Canada when I was six. My parents didn’t come with very much — about $100. We lived very frugally in a mobile home. I worked hard at school. I had some good connections and had the opportunity to go to Princeton University through a scholarship [where she got a degree in mechanical and aerospace engineering].

DS: I came out of Princeton and worked at Bombardier Aerospace in a very male-dominated environment. I worked there for 22 years. I first worked in flight services, which involved the testing and certification of the Dash-8, Buffalo, Beaver and Otter. I moved into customer engineering where I went around the world selling the planes and doing the modifications needed for different regions. I moved up through senior management and had the opportunity to be involved in a massive program of re-engineering the company. We purchased four companies — Canadair, De Havilland, Shorts and Learjet. It was a tough project, and that took several years. I was very proud of that work, and that was a big success story at Bombardier.

How work prepared her for politics

DS: I’m very lucky to have had a history of experience that has led very nicely into the political profession. Working with a variety of people with different perspectives and getting them together. Doing change management and getting people to accept change, be part of that change and adopt it.

DS: When I had kids, I started using the skills I developed at Bombardier and applied them to improving our community. In 2006, I ran for local councillor. Did not get in the first year. I got in on regional council in 2010. [Schulte ran for the new riding of King-Vaughan in 2015 and won again in 2019.]

On her appointment as Seniors Minister

DS: It was an incredible privilege. It was nice to see people get rewarded for their hard work. I spent three years chairing the seniors caucus. That was something I started myself. We had seniors caucuses in past parliaments, but the committee was not running. I started it up again, and we had 40 very active members involved. We stood up in different caucuses to talk about and advocate for seniors. We did talk about trying to get a seniors lens at the cabinet table. And it was nice to see the work on the committee lead to the appointment of Filomena Tassi, the first Minister of Seniors. She did an excellent job. So I’m honoured to be able to try to step into her shoes and build on the work that she has been doing.

A strong voice in cabinet

DS: I’m an equal voice at the table, speaking on behalf of seniors. I really do think we’ve been very effective and we’ll continue to be just as effective in making sure we have a loud and consistent voice at the cabinet table. And I’m very honoured to have that role.

Collaborative worker who gets results

DS: I’m proud of the collaborative, co-operative work that I do to bring people together to get results. As an example, when I was given the chair of the environment committee. That’s a tough committee made up of very strong members from all parties. We were successful in striking an agreement about what we were going to do in that committee. Our first two reports were unanimous, something that hadn’t happened in 10 years. I had really good relations with everyone who served on it. I even had [Conservative MP] Ed Fast say something very kind about me in the House – that doesn’t happen very often!

DS: Financial security and having access to good quality health care when they need it — these are big issues for seniors. The election platform promised a 10 per cent increase to Old Age Security for those over 75. They’re the ones who need it. As they age, they burn through their savings and they also have more health issues and complications that push the cost up for them. Women typically survive longer than men so when we have Pension Survivor Benefits that are dropping to 60 per cent – when the partner wants to stay in their home but all of a sudden their income is reduced significantly – that becomes a big barrier for people. I look forward to working with our provincial partners on that as well as improving access to doctors, moving forward on pharmacare, mental health, elder abuse. Another big priority is improving access to affordable housing options. Our National Housing Strategy has a focus on seniors. There’s a lot of work that has been done but lot’s more that we have to do.

DS: Definitely, ageism is something we have to work on as we move forward. Ageism is one of the issues that we raised in the committee that was one of the overarching concerns holding seniors back and impacting them in negative ways. There are a lot of cross-ministerial opportunities here. I will work with different ministers as we are initiating and moving issues for seniors. One that I’m thinking of is the crying need for workers that is going out across the country. How can we make sure that if seniors do want to stay in the workforce, that we remove those barriers for them to be able to do that? I think there’s a real opportunity there, and I think ageism factors into that.

A true member of the sandwich generation

DS: I’m the average Canadian of my era dealing with the kids on one end and the parents on the other end – all needing supports and help navigating the system. My husband’s parents are 93. We’ve worked through all the transitions in life that occur with age. After my mother-in-law had a stroke, we had to move them into supportive housing. Right now, we are in the middle of moving her into long-term care and the challenges of working through the health-care system and the challenges of finding long-term care that’s close to her partner so that they can still be active in each other’s lives. My mom is 86 and lives alone. She wants to stay in her home as long as she can. But because she lives on two-and-a-half acres and has lots of health issues, there are tremendous challenges in doing that.

Zoomer Interview: Trudeau and Seniors Minister On Creating a Better Canada for Seniors