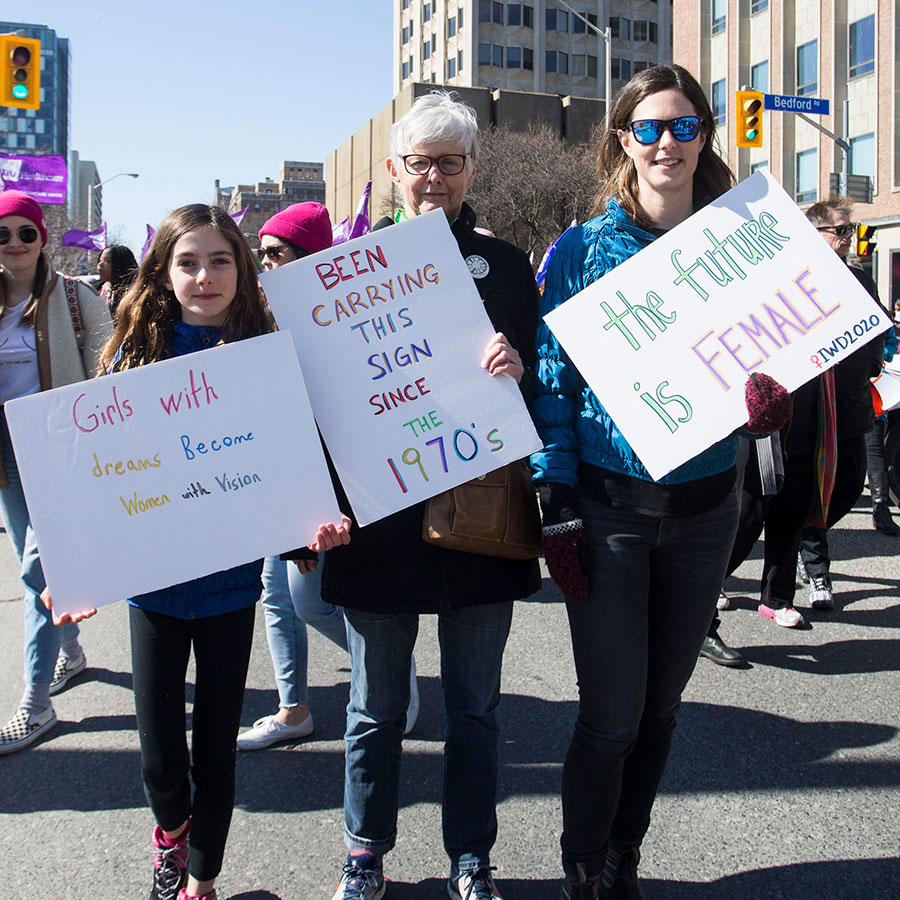 Thousands of people gathered in downtown Toronto Sunday, March 8 for an International Women’s Day march under the theme “Each for Equal,” which organizers said was a reminder that gender equity is a global issue and each individual has a responsibility to support it. Photo: Zou Zheng/Xinhua via Getty

Women in North America have been fighting for the same rights as men for more than 150 years, although the goalposts have changed as men made concessions and allowed women to vote, attend university, practice medicine and own land, to give a few early examples of battles fought and gains made.

Yet huge disparities remain and the lives of women are still more difficult than those of men, according to a new report released ahead of International Women’s Day by UN Women, an agency set up in 2010 to address gender equality and female empowerment.

It shows that in the 25 years since the United Nations organized the Beijing Declaration on Women and its Platform for Action, women’s access to paid work is still hampered.

Less than two thirds of women aged 25 to 54 are in the worldwide labour force, compared to nine out of 10 men, according to the report gauging progress since the 1995 declaration was signed by 189 nations, including Canada.

Women continue to perform most of the world’s unpaid home and care work, and when they do get a pay cheque, they receive on average 16 per cent less than men. Nearly one in five women has faced violence from an intimate partner in the past year, 32 million girls are still not in school and men still control three quarters of the parliamentary seats.

As the Beijing Declaration on women and Platform for Action turns 25 this year, “it has only been implemented halfway,” Phumzile Mlambo-Ngcuka, the executive director of UN Women, said in a recent telephone interview from her New York office.

“There is still a lot in it that has not been implemented and we are losing some of the gains that we made there.”

The Beijing conference came more than eight decades after the original International Women’s Day, now celebrated on March 8, was first held in the United States and several European countries.

Although there were a number of sticking points, particularly around a reproductive and inheritance rights, the event in China ended with 189 states signing the documents that promised advancement for women in almost every facet of life – from health to education to human rights.

The UN Women report released last week shows more girls are in school than ever before, fewer women are dying in childbirth and the proportion of women in parliaments has doubled.

“We have made progress,” said Mlambo-Ngcuka. But “it is uneven, and it is fragile in some ways, and it’s time to mobilize and get states to recommit to move forward to finish the agenda.”

When 75 per cent of the world’s parliamentarians, 73 per cent of managers and 70 per cent of climate-change negotiators are men, “it is not an inclusive and equal world,” she noted in a statement released with the report. “Only half is an equal share and only equal is enough.”

Here in Canada, the picture is comparatively brighter. Although fewer women than men are actively employed, the labour gap has decreased significantly over the years. In November 2019, Statistics Canada says 83.5 per cent of female Canadians between the ages of 25 and 54 were working at paid jobs – up from 75 per cent in the early 1990s – compared to 91.2 per cent of men in the same age range.

Women who were employed full-time in Canada in 2018 earned 87 cents for every dollar earned by a man, a considerable improvement over previous decades.

And more Canadian women than men are now earning a university degree.

On the other hand, nearly 80 per cent of the 93,000 people who reported to Canadian police in 2016 that they had been violently abused by an intimate partner were women.

And although more women that ever hold seats in federal Parliament, just 28.9 per cent of MPs elected in 2019 were female.

Judy Rebick, an iconic Canadian feminist, says the women’s movement globally has learned much since she began campaigning in the late ‘60s and early ‘70s.

For instance, she and fellow activists believed 50 years ago that strong laws would solve the problem of violence against women.

“And today we do have strong laws in Canada,” Rebick said in an interview. “We have some of the strongest laws in the world. But it doesn’t matter because the justice system is thoroughly patriarchal. So we didn’t understand everything we understand now. We fought for rights as we understood them. And now we understand them much more broadly. And the feminist movement is much broader.”

Now UN Women is organizing a follow-up to Beijing called Generation Equality, which includes two forums commemorating Beijing, one in Mexico City in May and one in Paris in July. The goal is to mobilize governments, civil society and UN agencies to build on the 1995 commitments.

“There is work going on now that is concrete,” said Mlambo-Ngcuka. “We just now want to co-ordinate. People who are doing work on violence against women, for example, must not think they are acting alone. They must be able to consolidate their work, whether they are in America or in India.”

Many countries have committed to more action this year, as has the private sector. But it is time, she said, for a significant global investment in the advancement of women. At the same time, “women have got to speak with loud voices.”

International Women’s Day: Honouring Women Who Were Unafraid to Stand Up