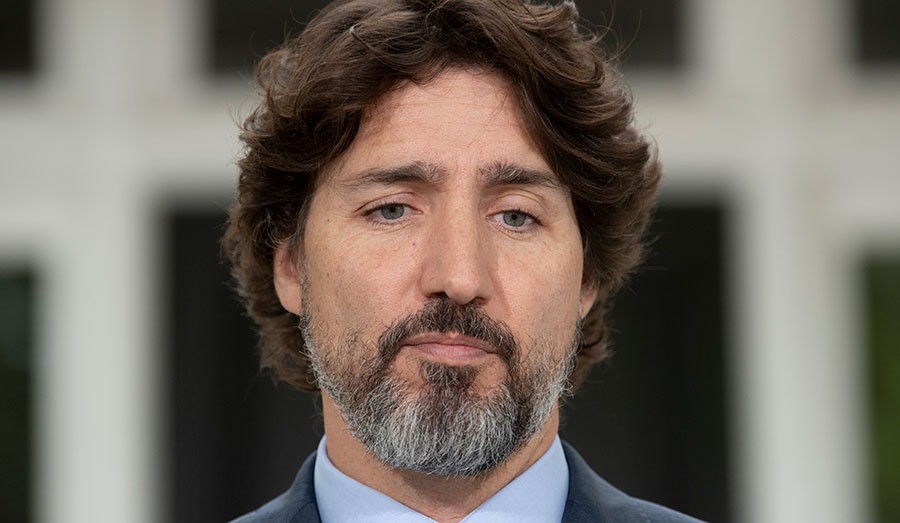 Justin Trudeau paused for 21 seconds at his press conference on Tuesday after being asked about U.S. President Donald Trump calling for military action against Americans protesting the death of unarmed African-American man George Floyd. Photo: The Canadian Press/Adrian Wyld

It was the longest pause. Excruciatingly long. Almost 21 seconds to be exact, but it spoke volumes.

When a reporter asked Prime Minister Justin Trudeau what he thought about U.S. President Donald Trump calling for military action against American people protesting the death of George Floyd — an unarmed Black man who died outside a Minneapolis store after he was arrested and one officer kneeled on his neck for almost nine minutes as the man pleaded with them, saying he couldn’t breathe — he was still as a statue, rolled his tongue in his mouth, shifted his weight from foot to foot, opened his mouth as if to speak, then stopped himself. A little “ahhh” escaped his lips, but more silence followed. Finally, this:

The CPAC video clip of his answer had been viewed 1.8 million times by late Tuesday afternoon, and Trudeau elaborated on his thoughts later in the House of Commons, although he still did not mention Trump and kept the focus on racism in Canada.

“Over the past few days, we’ve seen horrific reports of police violence against Black men and women south of the border. But these are not isolated incidents or elsewhere problems.”

The prime minster went on to say the “facts” are “anti-Black racism is real, unconscious bias is real, systemic discrimination is real. For millions of Canadians, it is their daily lived reality, and the pain and damage it causes is real, too.”

Following Floyd’s death, both peaceful protests and riots broke out in Minneapolis, where a police station was set on fire, and spread across America to all 50 states. In Canada, peaceful protests were organized across the country from Halifax to Vancouver. In Toronto, protests also centered on the death of Regis Korchinski-Paquet, an Afro-Indigenous woman who died after falling 24 stories from her balcony while police officers were responding to a call in her apartment.

Meanwhile, the Washington Post reported it was U.S. Attorney General William Barr who gave the order to clear protesters from Lafayette Square in Washington for a presidential photo op. Police fired rubber bullets and tear gas on the peaceful gathering outside the White House, despite the right to peaceful protest guaranteed in the American Constitution.

Trump’s threat to bring in the military to quell unrest in several American cities via the The Insurrection Act of 1807, which allows the president to call in the military to subdue civil unrest or rebellion under the proper circumstances, would be the first use of the act since 1992 when President George H.W. Bush invoked it at the invitation of the Governor of California during the Los Angeles race riots stemming from the acquittal of the police officers involved in the arrest and beating of African-American man Rodney King. However, it’s been invoked multiple other times throughout history,  including in 1831 by President Andrew Jackson to quell Nat Turner’s slave rebellion, in 1943 by President Franklin D. Roosevelt during the Detroit race riots and throughout the 1950s and 1960s by Presidents Dwight D. Eisenhower, John F. Kennedy and Lyndon B Johnson as a response to unrest related to everything from de-segregation in schools to riots following the assassination of Martin Luther King Jr.

In addition, Trump, while speaking in the Rose Garden on Monday, called himself “the president of law and order.” And that phrasing was likely no coincidence.

Trump’s “law and order” boast, though echoing his earliest campaign speeches, has deep Republican roots. In the late 1960s presidential candidate Richard Nixon campaigned on the idea of “law and order” to tackle crime in America during a time of civil unrest, with journalist Andrea Pitzer noting that, “by playing to racist fears, [Nixon’s campaign] could cloak divisive rhetoric in an unobjectionable demand for security during a chaotic era.” Pitzer also recalled that then-Governor Ronald Reagan, speaking after the assassination of Martin Luther King Jr., proclaimed the, “great tragedy that began when we began compromising with law and order, and people started choosing which laws they’d break.”

Of course, Trudeau has pause to recall his own father’s history with the phrase “law and order.”

In October 1970, Prime Minister Pierre Trudeau called the army into Quebec to protect politicians after the Front de Libération du Québec (FLQ) kidnapped the British trade commissioner and, five days later, Quebec labour minister Pierre Laporte. When asked what armed soldiers were doing in the province, Trudeau said: “There’s a lot of bleeding hearts around who don’t like to see people with helmets and guns. All I can say is go ahead and bleed, but it’s more important to keep law and order in this society.” When a reporter asked, “At what cost? How far would you go?” the elder Trudeau uttered the now infamous line: “Just watch me.” On Oct. 15, Trudeau invoked the War Measures Act, which suspended civil liberties, allowed police to detain anyone and permitted media censorship.

Trump’s idea of “law and order” and his threat to call in the military on his own citizens, is more in line with his very public admiration for authoritarian dictators. In the past he’s praised Russian President Vladimir Putin’s “strong control over a country,” Turkish President Recep Tayyip Erdogan as “somebody I’ve become very close to, in many respects, and he’s doing a very good job,” Chinese President Xi Jinping as “a friend of mine, who’s a very, very good man” and, of course, North Korean dictator Kim Jong Un, who he boasted, “wrote me beautiful letters and they’re great letters. We fell in love.”

That’s enough to give anyone pause, let alone a fellow world leader representing a democratic country like Trudeau. That said, the Canadian Prime Minister isn’t off the hook in this respect either.

In 2013 when, as Liberal leader, Trudeau praised China’s iron-fisted authoritarian rule on a Quebec chat show. When asked what country he admired the most, Trudeau said:

“There’s a level of admiration I actually have for China. Their basic dictatorship is actually allowing them to turn their economy around on a dime.” It outraged Chinese Canadians who were imprisoned or tortured for standing up for democracy.

Then there was the glowing tribute to Fidel Castro penned when the Cuban president died on Nov. 26, 2016. Noting that Castro was one of his father’s good friends, Trudeau called him “a controversial figure” but went on to mention his “tremendous dedication and love for the Cuban people,” despite documented instances of human rights abuses and political oppression.

The prime minister is a 48-year-old man who had to confront his white privilege and racist past during the 2019 election, when photos surfaced of him in blackface at his Montreal high school and in brown face at an Arabian Nights-themed fundraiser for the private school where he taught in Vancouver. The election hung in the balance, but Trudeau’s skin was saved when former U.S. President Barack Obama endorsed him, the country gave him a pass and he went on to form a minority government.

But that long pause reminds us the prime minister has a lot to think about when it comes to Trump, racism and human rights.

Trudeau has been reluctant to get into it with the U.S. President, even after months of tense negotiations in 2018 on the new NAFTA deal, called the Canada-U.S.-Mexico Agreement, when Trump threatened to put tariffs on Canadian-made cars.

That lead Trump to say Trudeau was a “nice guy,” but he was “two-faced.”

In the U.S., the police officer who kneeled on  Floyd’s neck, Derek Chauvin, was originally charged with third-degree murder and second-degree manslaughter — a charge upgraded by Minnesota Attorney General Keith Ellison to second-degree murder on Wednesday. That same day it was also announced that charges of aiding and abetting second-degree murder would be filed against the other three officers who watched on as Chauvin acted — Thomas Lane, J. Kueng and Tou Thao. They had all also been previously fired.

As for Trudeau, the prime minister decided, rightly so, to pledge to work harder to banish racism on his own turf.

“It is time for us as Canadians to recognize that we, too, have our challenges, that Black Canadians and racialized Canadians face discrimination as a lived reality every single day,” he told reporters at Tuesday’s press conference.

The systemic discrimination they face in every sphere of public life, from “our systems,” as he called them, needs to be corrected, and he said his government would do the work, but Canadians have a role to play, too.

“We need to be allies in the fight against discrimination. We need to listen, we need to learn and we need to … figure out how we can be part of the solution on fixing things.”