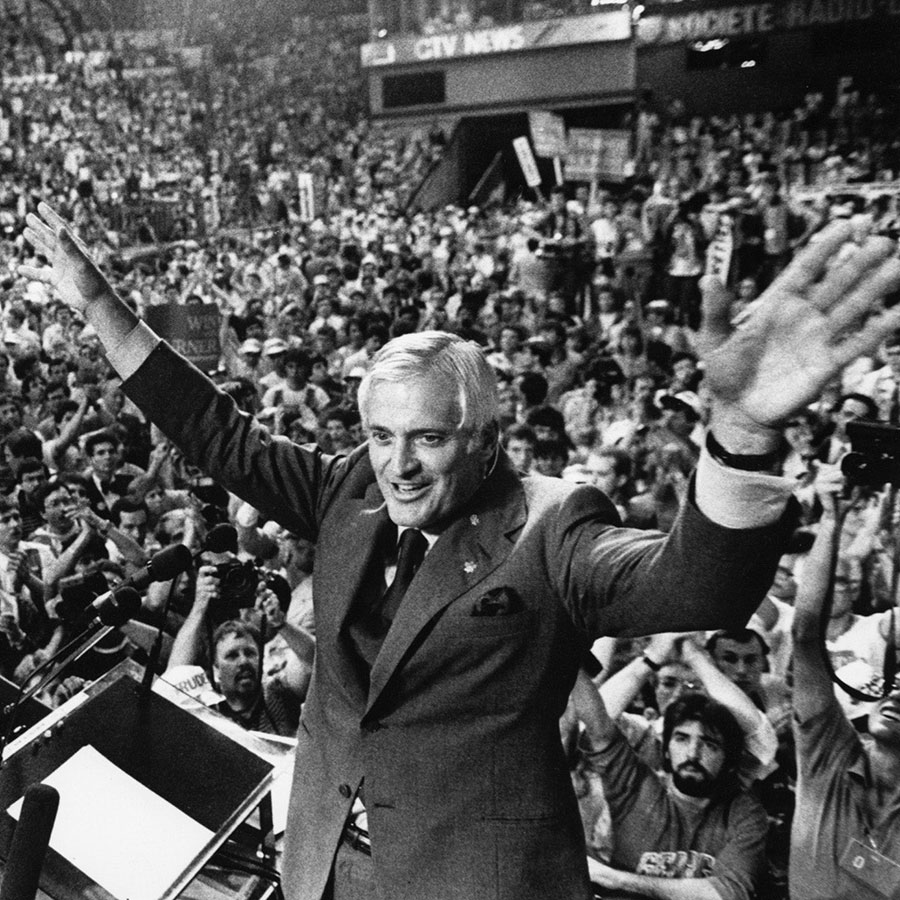 Former Prime Minister John Turner raises his arms in victory after winning the Liberal leadership race in Ottawa on June 16, 1984. Turner, dubbed "Canada's Kennedy" when he first arrived in Ottawa in the 1960s, died at the age of 91 on Friday night. Photo: The Canadian Press/Ron Poling

So said a 38-year-old John Turner in 1968 as he was running for the leadership of the Liberal Party of Canada.

One can easily forgive John Napier Wyndham Turner, who passed away this weekend at the age of 91, for thinking that way. For when he uttered this phrase, he seemed poised to inherit the Liberal leadership from retiring Lester B. Pearson, a role which would have undoubtedly catapulted him to the office of prime minister and completely changed the trajectory of his political life.

The Liberals’ so-called “Golden Boy” (or “Canada’s Kennedy”) was ready to fulfill his destiny and become leader of the nation. He had, it seemed, all the traits necessary to be a first-rate leader. He was ambitious, successful, politically connected, intelligent, athletic, charismatic, good-looking, bilingual and a top-rate parliamentarian to boot.

But in 1968, Turner was not the only rising star in the Liberal Party. In fact, he was going up against a much brighter political supernova – one Pierre Elliot Trudeau. Trudeaumania was sweeping Canada, and this new and exciting philosopher king from Montreal was riding a huge wave of popularity that swept everything out of its way, including the political fortunes and eventual legacy of John Turner.

Turner was born in Richmond, England, in 1929, right at the start of the Great Depression. When his father died in 1932, his Canadian-born mother, Phylllis, packed up the family and returned to Canada, first to Vancouver and then to Ottawa, where she rose through the ranks of the civil service. The family returned to Vancouver where Phyllis married Frank Ross, a First World War hero who later became the lieutenant-governor of B.C.

After earning his undergraduate at UBC, Turner went to Oxford on a Rhodes Scholarship, where he studied law. It was then that unfortunate timing first reared its head in Turner’s life. He had qualified for the Canadian sprint team for the 1948 Olympics but was forced to miss the games because of a knee injury.

Returning to Canada after his studies were over, he began practising law in Montreal and began to set his sights on a political career. His good looks and charming personality gained him entree into Montreal’s powerful political elite. He was on everyone’s guest list and dated a host of beautiful and connected women, including a short but much-talked about relationship with Princess Margaret, Queen Elizabeth’s sister.

He eventually married Geills McRae Kilgour, was elected for a federal seat in Montreal and quickly rose through the Liberal Party ranks.

Though he lost the his 1968 leadership bid to Trudeau, a disappointed Turner served ably in Trudeau’s governments, first as justice minister and later as finance minister. However, when he and Trudeau publicly disagreed on the government’s policy of instituting wage and price controls to combat raging inflation, he surprised everyone by quitting the party and returning to private life.

Turner spent his political exile in Toronto where he and Geills raised four children. He returned to corporate life, rising to the top of his profession and developing the reputation as a bon vivant.

It seemed by then that his political career was over. But in 1984, Turner saw an opportunity to make his big return. Trudeau was in the last days of a 20-year run as leader of the country, and the Liberals were looking for a new leader.

Trudeau, whose timing was always impeccable, read the tea leaves and sensed that the 1984 election was not winnable. Turner, whose timing was disastrous, completely misread the political landscape and chose the worst moment to make a run at the Liberal leadership.

Turner won the 1984 Liberal leadership race to replace Trudeau. In doing so, he made an enemy of second-place finisher Jean Chrétien, who immediately began a nasty internal campaign to foment rebellion against his long-time political rival.

By winning the leadership race, Turner assumed the office of prime minister and seemed poised to take over the mantle as the next long-serving Liberal leader.  But he still had to win an election. And, once again, fate conspired against him.

After only nine days in office, Turner called an election, encouraged by his own pollsters who advised him he had sufficient support among voters to win the election. But the pollsters were wrong. Voters had grown tired of the government’s mishandling of the economy and were fed up with a succession of scandals topped off by Trudeau’s endless patronage appointments.

Turner’s own campaign was a series of gaffes and mistakes. He was still good-looking but he no longer had the Golden Boy promise of ’68. He seemed tentative and nervous, and his speeches were punctuated with stutters and coughing.

He also appeared to be out of touch with the changing social mores. Feminists were outraged when cameras caught him patting several woman on their behinds, behaviour that may have been acceptable in corporate Canada but was no longer tolerated in Ottawa. He failed to connect to voters who, by and large, considered him a stumbling relic of the past.

As usual, Turner’s timing was all wrong. The Conservatives under Brian Mulroney roared to a majority government in that election. Turner, who had only served 79 days in office, was humiliated, pilloried in the press and attacked by his own party members. He remained Opposition leader, despite constant attacks from within his party, but he lost again to Mulroney in 1988.

In 1989, his political career in tatters, Turner resigned as leader of the Liberal party and once again returned to private life. His eventual replacement, Chrétien, won the next election and went on to rule Canada for another 10 years. That marked the second time in his political career that the leadership of the country had been within his grasp.

With a little luck and some better timing, John Turner could have enjoyed a long and respected run as a leader of Canada. But both times he got close to this goal, the unfortunate twists of fate conspired against him. In the end, he lacked the one attribute that makes or breaks political careers: that curious mix of practical sense, good luck and friendly fate that we call timing.

Turner once summed up his political misfortunes using a popular sports analogy – “Tonight you score a goal and you’re a hero; tomorrow you let a goal in and you’re a bum.” (Or worse, as “old Liberalism’s darling and its final, flawed champion” as the Globe and Mail memorialized him.

It’s a tragic epitaph for a man who twice came so close to leading the country. And it means he’ll be remembered as a failure and relegated as an historical footnote. All because the political gods were never one his side.

Jean Kennedy Smith, JFK’s Last Living Sibling and Champion of the Disabled, Passes Away at 92