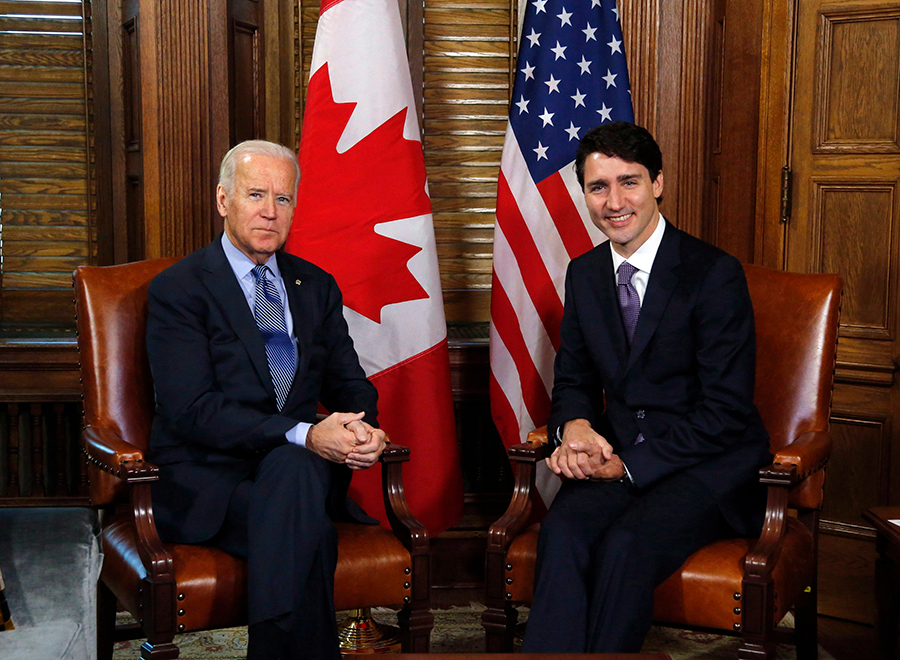 When Prime Minister Justin Trudeau called Joe Biden yesterday, he became the first world leader to speak to America’s President-elect since the election was declared in his favour.

The two leaders talked about the importance of working together to defeat the pandemic, how to kickstart the economy as well as a number of issues related to trade, energy, NATO, racism and China’s arbitrary detention of the two Michaels.

But it wasn’t so much the content of the discussion that prompted Trudeau’s early call. After all, these are complex issues that need more than a brief discussion to solve.

But by being the first world leader to congratulate Biden on social media – with the rest of the relieved Western alliance quickly following suit – Trudeau asserted Canada’s specially privileged relationship with the U.S. leader.

His early call – beating beleaguered U.K. Prime Minister Boris Johnson to the punch – suggests he is eager to get off on the right foot with the new U.S. leader. He has astutely recognized the political capital of making a good start and doesn’t mind basking in the afterglow of a victory has caused much celebration north of the border.

Significantly too, Trudeau is making the statement that Canada is more than ready to move on from four damaging years of Trumpism and hopeful in repairing the tattered relationship left behind by the Great Disruptor.

It was no secret that Trudeau and Trump never hit it off, a doomed political relationship if there ever was one, mirroring the unfriendly relations that existed between Pierre Trudeau and Richard Nixon. Nixon was memorably caught on tape calling Trudeau an “asshole,” to which Trudeau senior uttered the timeless quip: “I have been called worse things by better people.”

From the first awkward handshake between the two leaders, where young Trudeau both literally and symbolically wouldn’t let Trump get the upper hand – their relationship was characterized by open disagreements, petty sniping that was the public face of a visceral hatred between the two men.

They clashed both politically and personally, like a young nephew forced to sit by a crazy old uncle at Thanksgiving dinner. The smooth young and progressive Trudeau had little in common with the older reactionary and aggressively unpredictable Trump.

The fractious sparring and petty comments that developed between the two leaders took an economic toll on both countries. Trump constantly castigated Canada’s commitment to NATO and protectionist trade policies whenever possible, which led to a costly tariff war between the two nations and testy meetings when planning a new free-trade deal.

Over the years, his personal attacks escalated, with the president referring to the prime minister at different times as weak, dishonest and two-faced. Trudeau, despite his efforts to salvage whatever he could of the relationship while still maintaining Canadian values, didn’t take any of this sitting down. He vociferously criticized Trump for inciting a trade war and attempting to force Canada to bend to his will.

After the president departed the 2018 G-7 Summit in Quebec, where he refused to sign the customary joint statement, Trudeau told reporters he disagreed with Trump’s tariff policy, saying it was “kind of insulting” to Canada and that we “will not be pushed around.”  An incensed president heard these comments while flying back to Washington and responded in typical fashion – firing off a Tweet calling Trudeau “very dishonest & weak.”

The rift between the two leaders grew somehow worse when, at a 2019 NATO gathering in London, Trudeau was caught on a live microphone openly mocking the leader of the most powerful country in the world for keeping everyone waiting with long-winded press conferences.

Trudeau is obviously eager to get his new relationship with Biden off on the right foot. It certainly doesn’t hurt that the two occupy the same space on the political spectrum.

But Trudeau will also want to draw on the 77-year-old Biden’s years of experience and statesmanship. The new president has been involved in the political wars of Washington as senator and vice-president for almost as long as Trudeau has been alive.

In January 1973, when the then 30-year-old Biden was sworn in as the sixth youngest senator ever, Trudeau was just two years old and learning all about U.S.-Canada relations from his father at the 24 Sussex dinner table. Biden’s easy-going manner, hard-won experience and overriding decency will be far easier to work with than Trump’s unceasing and unhinged bellicosity.

Besides using Biden’s experience and knowledge of how Washington works, Trudeau will want to exploit Biden’s close political and personal ties to Barack Obama.

This hearkens back to a strategy Trudeau employed in 2016, when the young leader forged a “bromance” with the wildly popular Obama, who was then closing in on the end of his presidency.

Back then, the prime minister needed to overcome the “just-not-ready” tag the Opposition had burdened on him. What better way to gain an introduction to the corridors of power and the celebrity world than to associate himself with a respected politician and pop-star icon like Obama.

The good vibes that flowed between the two were in direct contrast to the ugliness that characterized his relationship with Trump. Instead of being called weak and dishonest, U.S. officials hailed the “special relationship” and “progressive vision of governance” that bonded the two leaders.

It wasn’t only Trudeau who benefited from the cosy alliance. Obama, who was gracefully exiting the world stage, used it to cement his legacy and go out on a high note. He served notice that he was passing the baton of progressive politics that he had so spectacularly championed on to his handpicked successor, the young Canadian leader who was burgeoning into a global superstar.

This close friendship between two leaders, which drew comparisons to the Mulroney-Reagan and Chretien-Clinton alliances of the past, also paid immense dividends down the road when Obama broke with tradition and endorsed Trudeau in his 2019 re-election campaign.

This came at a crucial time for Trudeau, who was still in the midst of his black- and brownface apology tour and helped mightily in repairing the damage the photos had made with racialized voters.

The political landscape has shifted greatly for Trudeau since the “Sunny Ways” of 2016. After a bruising election in 2019, the Liberal leader’s message of hope is beginning to show signs of wear. He has the struggles that go along with a minority government, and his party is facing scrutiny for the spending frenzy that has ensued since the pandemic struck.

To recapture the magic of his first election, he’s once again jumping at the chance to capture some of the pixie dust that is emanating in many parts of America after the Biden-Harris election. It’s why he was so quick to Tweet his phone call with the President-elect and Instagram to post a shot of himself and Biden during the vice-president’s 2016 visit to Ottawa.

Trudeau will do well to continue stressing the close relationship the two countries enjoyed during Obama’s presidency and use it to repair trade relations, work together on climate change and racism and perhaps use America’s clout to bring about the release of the two Michaels.

If he can recreate just some of that magic between himself and Biden, it will not only allow him to further Canadian interests with the U.S. but could also rejuvenate his voice on the world stage.

Ultimately, a strong political relationship between the two countries will help both Canada and the U.S. emerge from this ruinous pandemic together. By presenting a united front, it will engender public confidence that Canada is not alone in this struggle, a feeling of shared commitment that has been utterly absent over the last four years.