With His Coat and Mittens, Bernie Sanders, 79, Is Officially One of the World’s Most Memeable People 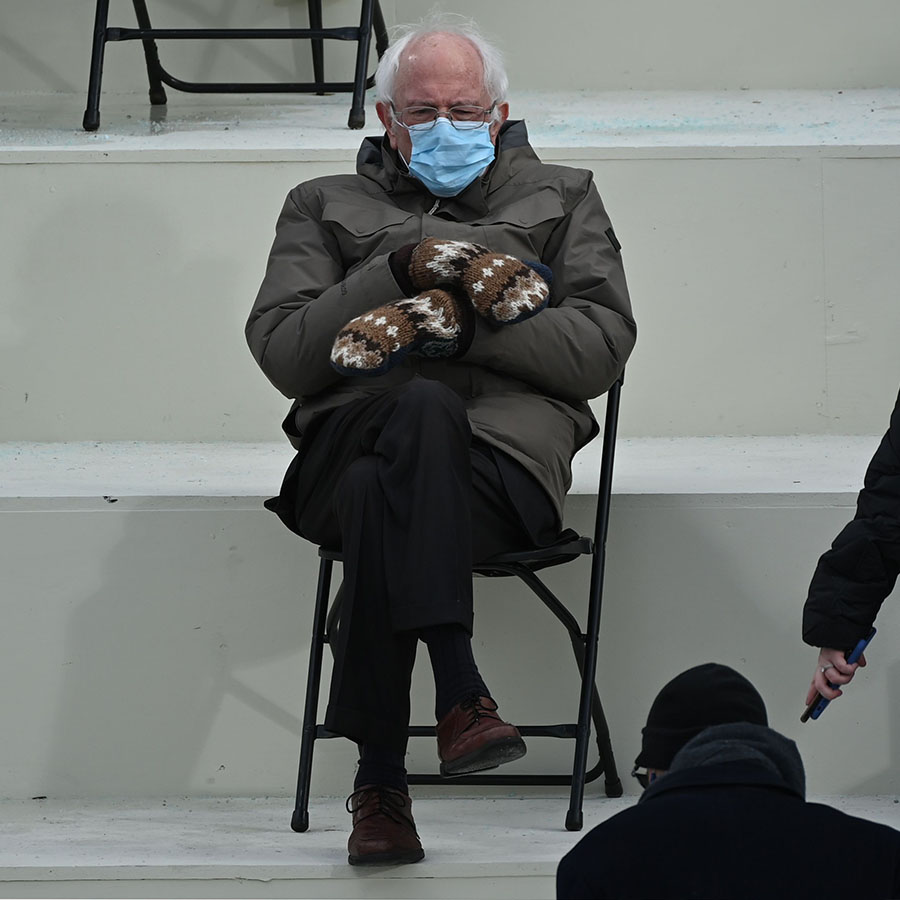 At 79, Bernie Sanders may just be the most meme-able person on the planet — especially following this now famous photo of him at Wednesday's inauguration ceremony. Photo: Brendan Smialowski / AFP via Getty Images

Amidst a sea of politicians and A-listers donning sleek formal coats and glamorous dresses at Wednesday’s presidential inauguration ceremony, it was the practical choice of attire worn by Vermont senator Bernie Sanders that took social media by storm.

The image of Sanders, 79, braving the cold in a casual army-green Burton Gore-Tex winter coat and a pair of mittens — a gift from Jen Ellis, a second grade teacher from Vermont, who made them out of repurposed sweaters and recycled plastic bottles — with legs and hands crossed smacked of the Democrat’s signature grump and anti-elitist attitude. And it came much to the delight of fans on social media, who quickly enshrined him as the first meme of the Biden era.

Initially, meme-makers went to work interpreting his thoughts and mood.

“This could’ve been an email,” a caption from writer and PhD student Ashley K. reads.

Another from CNN correspondent OmarJimenez likened him to a grandfather watching his grandson’s soccer match.

“This could’ve been an email” pic.twitter.com/kn68z6eDhY

But in short order social media users turned to Photoshop and full on memedom broke out with Sanders and his mittens appearing in everything from Star Wars scenes to pop culture moments to famous paintings and photos.

The fact that the Sanders meme caught fire is made even more impressive considering he unwittingly ran up against an all-star lineup of meme-worthy content from fellow inaugural attendees. Some viewers, for instance, felt Lady Gaga channelled The Hunger Games with her inauguration brooch that resembled a mockingjay pin from the popular book and film series; others latched onto how Jennifer Lopez worked her tune “Let’s Get Loud” into her performance of “This Land is Your Land”; and there was even an outcry of concern over Tom Hanks’ refusal to wear a coat while hosting the virtual inauguration concert in frigid Washington temperatures.

Still, all of those moments were eclipsed with the simple crossing of Sanders’ mittened hands. And his base of young supporters certainly helped matters.

A 2019 poll from Politico and Morning Consult indicated his support was strongest among those ages 18 to 44, a demographic prone to expressing anything from angst to admiration with a meme. And the light-hearted memes reflect the latter, with younger audiences gravitating toward his progressive ideals and his tell-it-like-it-is attitude that’s earned him the reputation as politics’ cool grandpa.

And judging by Sanders’ early reaction to all the hubbub over his viral outfit, he was taking the gentle ribbing pretty well.

“In Vermont, we know something about the cold and we’re not so concerned about good fashion, ” Sanders told CBS news after the ceremony. “We want to keep warm and that’s what I did today.”

But even with Sanders’ practical fashion choices explained, the memes didn’t stop. In fact, people seized on another image of Sanders from the inauguration and made that go viral.

The second image is a shot of Sanders carrying a brown manila envelope on his way to his folding chair, prompting Twitter users to surmise that the historic event was just one of many pressing commitments on his daily to-do list.

Sanders, however, is no stranger to the meme treatment.

In 2019, Saunders released a fundraising video that launched a viral meme. Looking like he was on take 20 for the video, and wearing the same Gortex jacket, he told his supporters “I am once again asking for your financial support.” The request led to a variety of memes, including one comparing the plea to a teenager requesting financial assistance from a parent. Then, there was the time he tempted the online masses by delivering a speech behind a podium made to look like a giant tub of Ben and Jerry’s in 2017.

And through it all, Bernie appears to take it in stride. Even Curb your Enthusiasm star Larry David’s spot-on SNL impersonation of Sanders — the likes of which can often needle thinner-skinned personalities — appear to roll off the Senator’s back.

After discovering he was a distant relative of his comedic doppelgänger in an episode of the PBS show Finding Your Roots, Sanders acknowledged his second cousin’s knack for impersonating him, admitting “he does a better Bernie Sanders than I do.”

Of course, anyone scrolling through their social media over the past few days would have to disagree. Only Bernie could take a winter coat, a pair of mittens and a folding chair and inspire the most memeable moment of 2021.