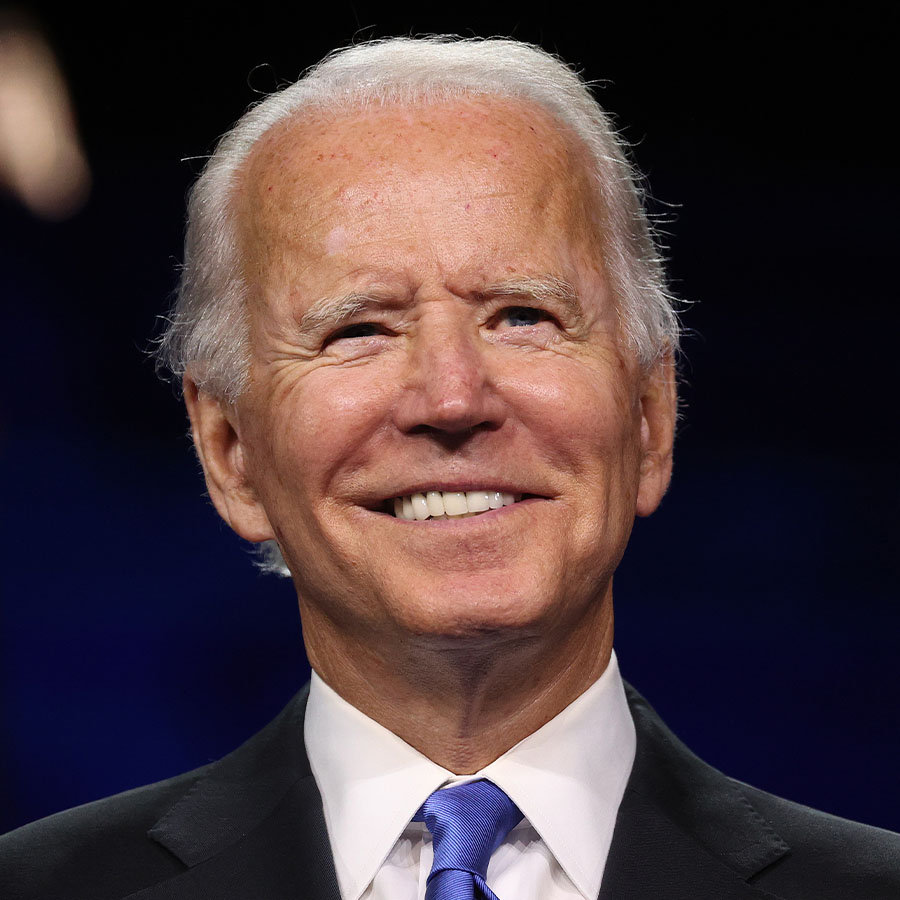 At 78, Joe Biden is not only America's oldest president but, in terms of hitting policy goals and earning laurels from both sides of the political aisle, one of the country's most successful through his first 100 days. Photo: Win McNamee / Getty Images

Joseph Robinette Biden Jr. was one of the youngest senators ever in American history when he was first elected to Congress in 1973. At 78, when he was sworn in as the 46th President of the United States, he became the oldest man to ever hold that office. Many have questioned the ability of Joe Biden, given his age, to meet the physical and cognitive demands of the office. And just two months into his presidency, when he tripped three times climbing the stairs to board Air Force One, critics were quick to jump on the supposed “evidence” of the “clumsy old man.”

But not only is Biden the oldest president to serve, he also has the personal attributes and habits — faith, purpose and physical fitness — that we know lead to successful aging. Plus, he models the most desirable traits associated with age — experience, resilience and wisdom. And, of course, there’s his confidence. In a January 2020 interview with the New York Times editorial board, mere days before securing the Democratic presidential nomination, Biden, when questioned about his age and physical fitness for office, answered with a defiant, “Watch me. Watch me. All this stuff about lack of energy … Come see me.” He added that he’d “adopted [baseball legend] Satchel Paige’s attitude toward age,” exemplified in the Hall of Famer’s now-famous quote asking, “How old would you be if you didn’t know how old you are?” The 78-year-old’s response: “I’m 50.”

So with experts now predicting an economic boom under President Biden, the realization of his goal of vaccinating 200,000 Americans coming a week ahead of schedule and an approval rating at 54 per cent, we take a look at an overview of how America’s oldest president has influenced policy as he marks his milestone 100th day in office.

Judging a president’s performance after 100 days in office is an American political tradition that historians say began with Franklin Roosevelt’s first term in 1933, when he embarked on a rapid-fire rollout of measures to counter the Great Depression. Here are some of the key policy issues of Biden’s first 100 days and how he has fared so far:

Biden’s major COVID-19 promise was 100 million shots in Americans’ arms by his first 100 days in office. Some 290 million shots have been distributed, more than 230 million administered, and about 96 million Americans are fully vaccinated, 29% of the population.

Biden’s vaccination campaign built on efforts started under President Donald Trump to manufacture and distribute the shots, but he added mass vaccination sites and ramped up government agencies to aid the distribution effort.

Over 3,000 people were dying per day when Biden took office. Now that figure is under 700 a day.

Biden’s next 100 days will force him to face vaccine hesitancy among millions of Americans and an uptick in variants of the virus.

Jobs and the Economy

Biden, a Democrat, devoted much of his first several weeks in office to passing a $1.9 trillion stimulus bill to limit the pandemic’s economic fallout.

The American Rescue Plan, passed over Republican opposition, delivered on the key economic promise Biden made on the campaign trail: checks for Americans.

Helped by the stimulus plan for families and businesses and also by the steady rollout of vaccines, economic growth is expected to top 7% this year, the fastest since 1984. It would follow a 3.5% contraction last year, the worst performance in 74 years.

Nearly 1 million jobs were added in March, up from 379,000 in February. The improvement is expected to continue as normal commerce resumes and people become comfortable again with dining out at restaurants and other in-person services.

But the gap in employment levels compared with the months before the pandemic remains massive and concentrated in industries like leisure and hospitality that are important sources of jobs for the less skilled.

U.S. payroll employment is about 8.5 million jobs short of where it was in February 2020. A million or more jobs would be needed beyond that to account for the usual month-to-month growth in the labor force and employment.

Biden has proved to be unexpectedly tough on foreign policy regarding America’s chief challengers. He has imposed sanctions on Russia in response to Moscow’s interference in the 2020 elections and a massive cyber hack attributed to Russia, and referred to Russian President Vladimir Putin as a “killer.”

Biden has held on to Trump-era sanctions on Iran and refused to lift them as a condition for getting Tehran involved in direct negotiations over its nuclear program.

He has maintained Trump’s trade tariffs on China, allowed U.S. diplomats to visit Taiwan, and ratcheted up pressure on China over its treatment of Uyghurs in its Xinjiang province and its crackdown on democracy activists in Hong Kong.

Those policy positions have shown that the threat posed by Beijing is now seen largely as a bipartisan issue in the United States.

Biden also set aside concerns about infuriating NATO ally Turkey when he formally recognized that the 1915 massacre of Armenians in the Ottoman Empire constituted genocide.

Biden moved swiftly to reverse some of Trump’s hard-line immigration policies, but he has struggled to deal with a sharp rise in the arrival of migrants at the U.S.-Mexico border, including tens of thousands of families and unaccompanied children.

In recent months, unaccompanied children have been backed up in crowded border stations, even as the Biden administration has raced to open thousands of emergency shelter beds.

Biden left in place a Trump-era COVID policy that blocks access to asylum for many arriving at the border, saying it is needed for health reasons. Advocates for immigrants worry that legitimate asylum seekers are being turned away.

Biden also pledged to increase the number of refugees allowed into the United States, but then backtracked and stuck with Trump’s historically low ceiling for this year.

U.S. mass shootings, which slowed during the coronavirus lockdowns, surged again in 2021, to 163 such events this year, as of April 26, compared with 94 over the same period in the prior year, according to the Gun Violence Archive.

The rise shows how little immediate power Biden has as president to change Americans’ easy access to firearms, though he held campaign events with victims of gun violence promising action.

Biden has called for broad legal changes, including banning military-style assault weapons and large-capacity ammunition magazines, but such measures would need to pass Congress.

He is pushing the Justice Department to crack down on self-assembled “ghost” guns, and proposed a budget that adds hundreds of millions of dollars for measures like starting voluntary gun buyback programs.

He did not deliver on a promise to commission reports on the Justice Department’s gun oversight reforms or on failures within the background check program.

Biden also stepped back from a campaign pledge to launch an oversight commission to deal with excessive police violence and improve police training, and will use the Justice Department’s powers to investigate local police departments for systematic civil rights violations.

Biden moved quickly to have the United States rejoin the 2015 Paris Agreement to tackle climate change and enlisted an “all of government” approach to deliver on a campaign promise to decarbonize the American economy by 2050.

Responding to increasingly dire warnings about the threat of climate change and pressure from a new generation of activists, his administration’s actions go beyond those of President Barack Obama’s in ambition.

Last week, he unveiled a goal to cut emissions in half from 2005 levels, nearly doubling a target laid out by his former boss.

To help achieve that target, Biden has laid out a $2 trillion infrastructure plan that includes billions in investments in electric vehicles and clean energy that he says will create millions of good-paying jobs. His administration has paused new oil and gas leasing on federal lands and waters in what is widely seen as a first step toward a permanent ban.

Biden’s Cabinet nominees were more diverse in terms of race and gender than any predecessor, at 46% women and 50% nonwhite. So far, 21 of 23 Cabinet-level nominees requiring U.S. Senate approval have been confirmed.

Biden has appointed double the number of women than his predecessors, on average, as well as Pete Buttigieg as the first openly gay Cabinet secretary, Lloyd Austin as the first Black defense secretary, Deb Haaland as the first Native American interior secretary and Alejandro Majorkas as the first immigrant to head the Department of Homeland Security.

Polls show that more than half of Americans approve of the job he is doing so far, including some Republican voters.

“He talks in such an empathetic and low-key way it’s impossible to object to it,” said presidential historian Doug Brinkley. “He’s been very calming and reassuring at a time of great strife.”

Biden’s habit of drawing on personal tragedy to explain policy and his lack of appetite for political jousting has stymied Republican efforts to undercut him.

“Biden is a very likeable president who’s cut out all of he drama,” said Republican strategist Scott Reed. “His command focus on the coronavirus is working.”

The Bidens brought their two German Shepherd dogs to the White House and promised to introduce a cat as well.

Major, the younger dog, was to get training outside the White House after two biting incidents at his new home, a spokesman for first lady Jill Biden said this month.

So far, there is no cat.

U.S. President Joe Biden Will Rely on Age and Experience to Heal a Sick and Weary Nation