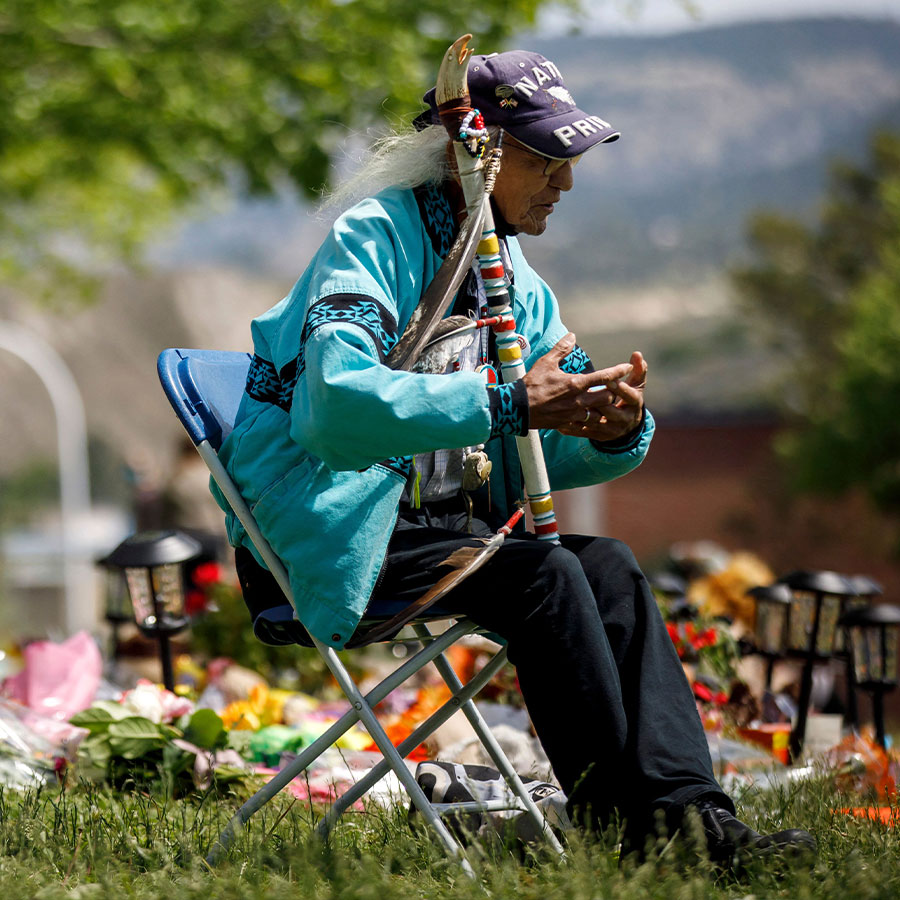 Kamloops Indian Residential School survivor Stanley Paul, 76, sits by a growing makeshift memorial near the facility — where the remains of 215 children were found — on June 4. On Wednesday, the Lower Kootenay Band said that the remains of 182 people were found in unmarked graves close to the former St. Eugene’s Mission Residential School in Cranbrook, B.C. Photo: Cole Burston / AFP / GettyImages

Another Indigenous community in B.C. is reporting the discovery of unmarked graves on the grounds of a former residential school.

In a statement released Wednesday, the Lower Kootenay Band — a member band of the Ktunxa Nation — said remains of 182 people were found in unmarked graves close to the former St. Eugene’s Mission School near Cranbrook, which operated from 1912 to the 1970s.

The search was conducted by the Aq’am, a member community of the Ktunxa Nation, in 2020.

“Some of the findings had the human remains buried in shallow graves only three to four feet deep,” the statement says, adding that about 100 Ktunxa Nation band members were forced to attend the residential school.

The announcement comes just over a month after the Tk’emlups te Secwepemc First Nation discovered the remains of 215 children on the grounds of the former Kamloops Indian Residential School in B.C and less than a week after the Cowessess First Nation announced the discovery of 751 unmarked graves near a former residential school in Saskatchewan.

According to the Indian Residential School History and Dialogue Centre, there were recurring outbreaks of influenza, mumps, measles, chicken pox and tuberculosis at St. Eugene’s residential school.

It’s estimated that at least 150,000 First Nation, Inuit, and Métis children were forced to attend residential schools — which existed in Canada from the 17th century until the late 1990s.

The residential school system, which the Truth and Reconciliation Commission called “cultural genocide” in 2015, forcibly removed children from their families, subjecting them to malnourishment and physical and sexual abuse. The schools were also known for overcrowding, poor sanitation, unhealthy food and menial labour.

The Lower Kootenay Band says it’s in the early stages of learning about the report’s findings and will provide more updates.

Canada Day: Trudeau, Indigenous Leaders and Others Reflect on Celebrating Our Nation in the Wake of Residential School Tragedies