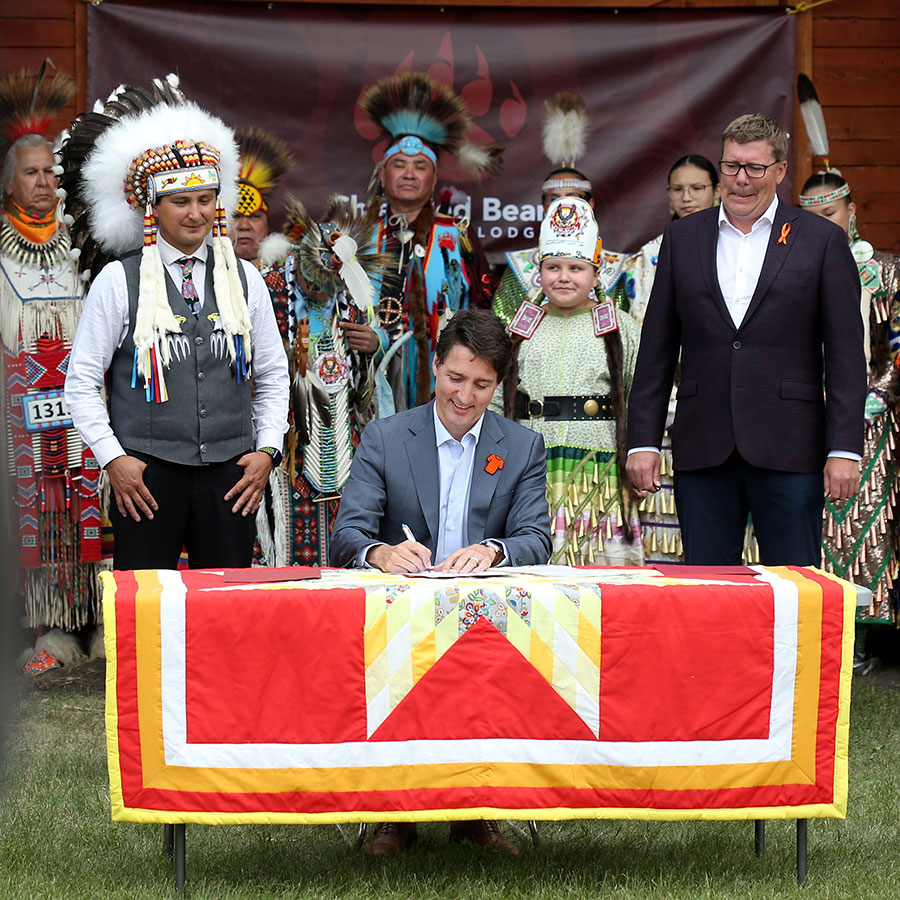 The Canadian indigenous group that announced last month the discovery of an estimated 751 unmarked graves near a former residential school said on Tuesday it would take charge of its own child welfare services under an agreement with the federal government.

The accord, unveiled at an event in the western Canadian province of Saskatchewan attended by Cowessess Chief Cadmus Delorme, Canadian Prime Minister Justin Trudeau and Saskatchewan Premier Scott Moe, marks the first time in 70 years the community will have control over child and family services among its members.

It is the first such agreement under a 2019 law meant to give indigenous groups more control over child welfare in their communities and reduce the overrepresentation of indigenous children in foster care. Cowessess First Nation passed an act intended to do that in March 2020.

“Our goal is one day there will be no children in care,” Delorme told the event, adding: “We have a lot of work to do.”

Trudeau said his government is in talks with other First Nations on similar agreements. Government spokespeople did not confirm whether Ottawa would continue to fund the First Nation’s child and family services costs going forward.

Canada has for decades disproportionately separated indigenous children from their families to place them in foster care – sometimes because services they needed were underfunded on reserves.

In Saskatchewan, 80% of children in foster care are Indigenous, according to a 2018 report.

Canada is reeling from the discoveries of more than 1,000 unmarked graves at the sites of former residential schools, many of them believed to be children. They are a grim reminder of the abuses indigenous communities have suffered for generations and their fight for justice.

For 165 years and as recently as 1996, Canada’s residential school system separated children from their families and sent them to boarding schools where they were malnourished, beaten and sexually abused in what the country’s Truth and Reconciliation Commission called “cultural genocide” in 2015.

The federal government was in court last month fighting a Human Rights Tribunal ruling that would have made Ottawa individually compensate children and families harmed by what the government admits is a discriminatory child and family services system. A federal court ruling is pending.

Tuesday’s announcement may not improve things for Cowessess children if the circumstance of their families’ lives do not change as well, said Cindy Blackstock, a member of Gitxsan First Nation and executive director of the First Nations Child and Family Caring Society, which is taking the government to court over the system.

That would require better funding for services such as housing, she said.

“We know from the research that the closer (to the First Nation) the control is for children’s services, the better the outcomes ultimately are for children. So that’s positive,” she said.

Canada has been rocked by the disclosures of more than 1,000 unmarked graves at the sites of former residential schools – institutions that were part of an abusive system that the country’s Truth and Reconciliation Commission called “cultural genocide” in 2015.

Here are some of the discoveries that have been made.

On May 27, the Tk’emlúps te Secwépemc Nation in British Columbia said it had discovered the unmarked graves of an estimated 215 children near the site of the former Catholic-run Kamloops Indian Residential School.

On June 24, the Cowessess First Nation said it had discovered the unmarked graves of an estimated 751 people near the site of the former Catholic-run Marieval Indian Residential School in Saskatchewan.

On June 30, the Lower Kootenay Band said the ʔaq’am First Nation discovered the remains of an estimated 182 people, including an unknown number of children, in 2020 near the site of the former Catholic-run St. Eugene’s Mission School near Cranbrook, British Columbia.

Since 2012, research has been conducted to identify people buried at three sites near the former Brandon Indian Residential School in Manitoba, which was run by both the Methodist and United churches. Sioux Valley Dakota Nation has said there are an estimated 104 people buried at those sites, about 78 of whom are accounted for in death records.

Bones started turning up near the site of the former Catholic-run Muskowekwan Indian Residential School in Saskatchewan during water-line work in the early 1990s. The Muskowekwan First Nation in partnership with two universities found 35 unmarked graves in 2018 and further searches are being carried out.

(Additional reporting and writing by by Anna Mehler Paperny in Toronto; Editing by Peter Cooney)