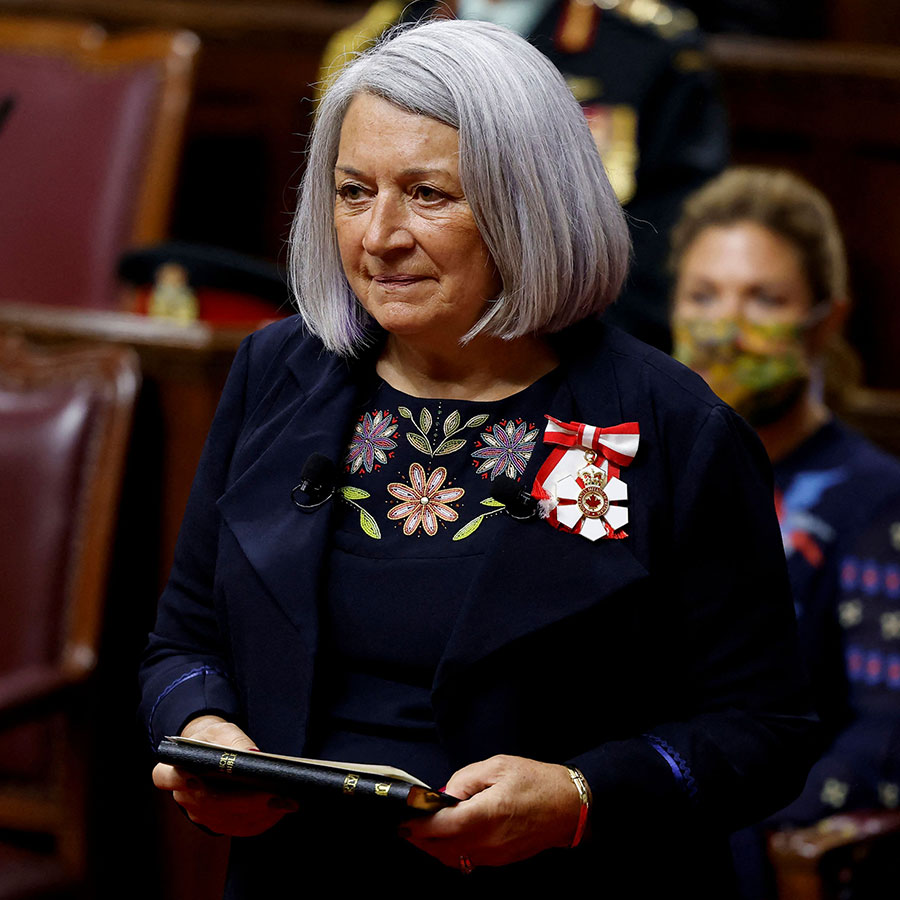 Mary Simon, 74, seen during her swearing in ceremony as the first Indigenous, and oldest incoming, Governor General of Canada, promised to never lose sight of the fact "that our selflessness is one of our great strengths as a nation. I pledge to be there for all Canadians." Photo: Blair Gable / Pool / AFP / Getty Images

The music of the Ottawa River Singers First Nation drum group, as well as cheers from onlookers, echoed outside the Senate chambers in Ottawa this morning ahead of the historic installation of Mary Simon as Canada’s 30th Governor General.

Simon, 74 and a native of Kangiqsualujjuaq, Nunavik, in northern Quebec, is both the first Indigenous Governor General in Canadian history as well as the oldest incoming Governor General ever.

The ceremony took place four days after Simon met with Queen Elizabeth II — whom she’ll officially represent in Canada — via video call, with Her Majesty noting, “you’re taking over a very important job.”

“Yes, I’m very privileged to be able to do this work over the next few years,” Simon replied. “I think it’s vitally important for our country.”

Flanked by her husband — journalist, broadcaster and author Whit Fraser — Simon appeared for the ceremony in what the Aboriginal Peoples Television Network (APTN) described as “a dress and jacket by designer Victoria Okpik from Quartaq, Nunavik. The hemline of the jacket is subtle and dark, but she has a trim that belongs on an Amautiq, a traditional coat of Inuit women designed to carry babies.”

The ceremony itself took place in the temporary Senate of Canada building (due to Parliamentary renovations) and was pared down as a result of COVID-19 restrictions. The event included nods to Simon’s Inuit heritage, including an Inuit drummer and the lighting of a traditional Inuit oil lamp called a Qulliq.

Those in attendance included Prime Minister Justin Trudeau and his wife Sophie Gregoire-Trudeau, National Chief of the Assembly of First Nations RoseAnn Archibald and Minister of Crown-Indigenous Relations Carolyn Bennett among other dignitaries.

“You remind us that true leadership is not measured in the honours or distinction stacked up behind someone’s name … Rather, true leadership is measured in what you do for those around you. It is measured in an ability to reach out and build a brighter future for all, not just a lucky few,” Trudeau said at the ceremony. “In this moment of unprecedented change — of rebuilding from the pandemic, of fighting the climate crisis, of walking forward on the path of reconciliation — we need your vision of a stronger Canada for everyone.”

In her speech, Simon acknowledged the hopes that accompany her appointment, “a renewed sense of possibility for our country and hope that I can bring people together.”

Simon also pointed to ordinary Canadians across the country doing extraordinary things in service of their communities, promising that, “as governor general I will never lose sight of this — that our selflessness is one of our great strengths as a nation. I pledge to be there for all Canadians.”

Building Bridges Between Generations and Cultures

Simon is the daughter of an Inuk mother and a father from the south who managed a Hudson’s Bay post. She noted, when her appointment was announced in early July, that her mother and grandmother, “were my teachers and mentors … They both instilled in me a boundless energy for learning, self-improvement and helping my community. They also taught me to always be proud of who I am and to keep my mind open to other points of view.”

Of her father, she said at the time: “I learned about the south and the non-native world from a man who had a profound love and respect for the north, its people and its natural beauty.

“Combined,” she continued, “these experiences allowed me to be a bridge between the different lived realities that, together, make up the tapestry of Canada. I can relate to all people, no matter where they live, what they hope for or what they need to overcome.”

Simon began her career in broadcasting with CBC North before joining the Northern Quebec Inuit Association, fighting for the rights of Inuit Canadians as president of Inuit Tapiriit Kanatami (ITK) and making history as the first Inuk Canadian ambassador (first of Circumpolar Affairs and, later, as ambassador to Denmark). She has been awarded the Order of Canada and the National Order of Quebec, among other honours.

When it comes to the national reckoning over the unmarked graves found at multiple residential school sites in recent months, Simon promised, during her speech in early July, to work to promote healing across Canadian society as a whole, including, “stopping to fully recognize, memorialize and come to terms with the atrocities of our collective past that we are learning more about each day … I believe that we can build a hopeful future in a way that is respectful of what has happened in the past.”

The poem includes the lines:

“When she arrived from the womb her father wrapped a seal-skin bracelet on her small wrist. Her mother sang softly into her ear her unfolding story how she would walk through the storms to bring life to her people.”

The poem notes how Simon has “covered many territories navigating with the stars her ancestors beside her,” who taught her important lessons about community and reconciliation.

Halfe ends the poem with, “In Cree, we say: ki ma mi hcih in an You have made us so very proud. We stand with you.”