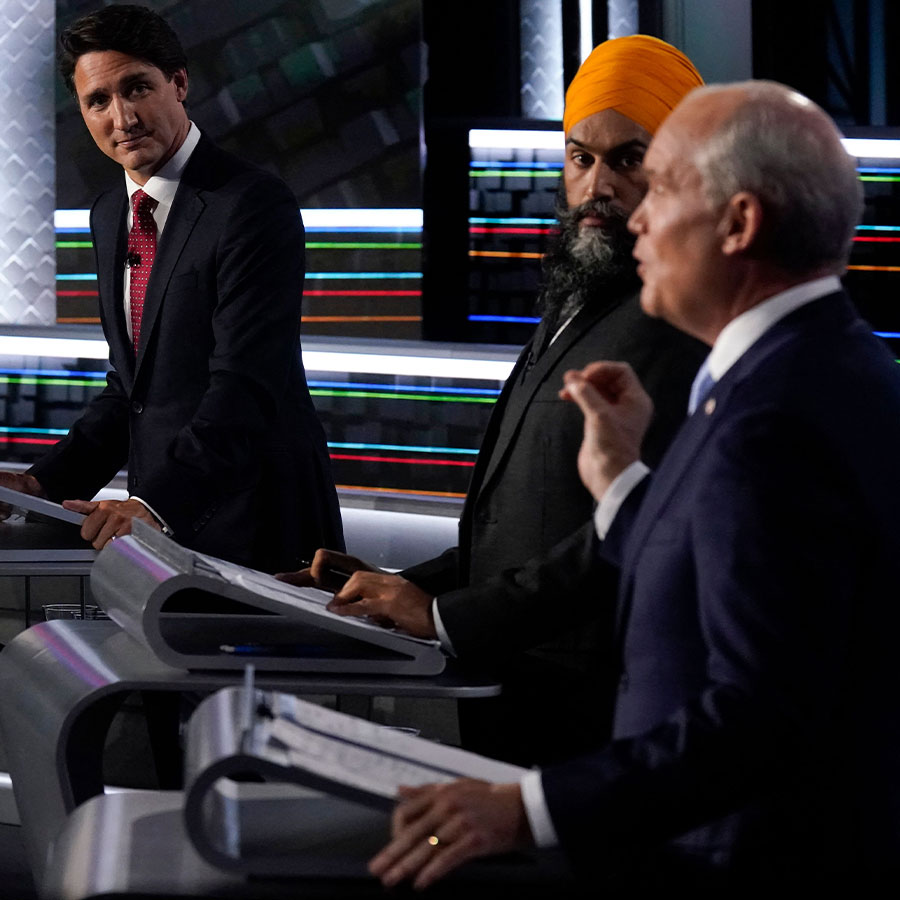 With less than two weeks until the Sept. 20 federal election, the five leaders of Canada’s national parties made a last-ditch attempt to woo voters at the English-language Leaders’ debate in Gatineau, Que.

Five party leaders — Liberal Justin Trudeau, Conservative Erin O’Toole, NDP Jagmeet Singh, Green Party Annamie Paul and Bloc Québécois Yves-François Blanchet — argued back and forth for two hours hoping to convince voters that their party had the winning plan to help the country emerge from the social, health and financial chaos brought on by the pandemic.

“Every party up here says, ‘We have the best plan,'” said Trudeau. As well as plans, the leaders also had panoply of platitudes, well-rehearsed talking points that they all relied on heavily during the course of the evening.

And while this meant that none of the leaders said anything terribly substantial or informative, they all managed to escape unscathed — which, of course, was their goal going into the evening.

It took almost 80 minutes before the moderator finally announced a section of questions on seniors. All of the leaders acknowledged that the pandemic was hitting seniors hardest, but none of presented a clear plan to address this reality, suggests C.A.R.P. Chief Operating Officer & Chief Policy Officer Bill VanGorder.

When the leaders were asked whether they would put a loved one in long-term care, despite their failure to protect residents during the pandemic, Trudeau dodged the question, saying, “Tomorrow is mom’s 73rd birthday and she’s doing well.” Trudeau was asked again, whether he would place a loved one in a long-term care facility. “Yes, with proper care,” he said, before highlighting the Liberal’s election promise to hire 50,000 new personal support workers and increase their salaries.

When O’Toole was challenged with the same question, he responded more directly: “I have a grandmother in one.” He suggested that his government would provide $3 billion “for provinces to draw on for LTC infrastructure upgrade.”

The debate format included virtual questions from non-journalists, including Janet Falla, a senior, who asked: “At my age, I never imagined I’d have to keep on working. But I have to afford to live where I do. So I’d like to know, when they become prime minister, what will they do to help us seniors survive?”

Trudeau answered Falla by bringing up his promises to bump up GIS payments and increase the OAS for seniors over 75. Blanchet objected (of course) to Trudeau’s platform, saying it would create two classes of seniors, those under 65 and those over 65.

Singh was the only leader to actually address Falla’s concern directly. “I don’t think our seniors should have to work. We have to make sure seniors are able to retire with dignity. A guaranteed income would be a starting point,” he said. And who would pay for this largesse, Mr. Singh? Why “the ultra rich,” of course.

While gratified that seniors issues cam up in the debate, VanGorder, wasn’t overly impressed with anything offered by the party leaders. “It seemed they either weren’t concerned about winning support from older Canadian voters or they did not really understand their concerns and issues,” said VanGorder.

The format of the debate — with virtual questioners coming and going, a buffet of topic segments, constant hopping from one debater to another with little interaction among them — didn’t help provide for a meaningful outcome.

For much of the night, Trudeau seemed on the defensive, no doubt a result of being attacked repeatedly for calling the election in the midst of a pandemic surge, the government’s mishandling of the Afghanistan evacuation, failing to meet the Paris emissions target goals, and his inability to free the “Two Michaels” from detention in China.

O’Toole, wearing what looked like a forced grin during the entire two hours, came off as preternaturally calm and cheery. Singh, who kept trying to dismiss both the Liberal and Conservative Leaders simultaneously, got off a good zinger: “We just heard Mr. O’Toole and Mr. Trudeau argue over who’s worse, and honestly it’s a tough choice.” He followed this up by reminding voters, “You’re not stuck with these two.”

The Green Party’s “I had to crawl over a lot of broken glass to get here” Leader, Annamie Paul, may have delivered the best performance of the night. She highlighted her position as the only female party leader and jabbed at Trudeau, saying, “I do not believe Mr. Trudeau is a strong feminist,” referring to the Prime Minister’s dismissal of from caucus of Jane Philpott and Jody Wilson-Raybould, two women who openly challenged him.

This poke led to Trudeau’s best line of the night, saying, “I won’t take lessons on caucus management from you,” alluding to the damaging internecine battles that have split the Green Party since Paul took over.

Paul also had one of the zingiest exchanges of the night, inviting the Bloc’s Blanchet to “become educated about systemic discrimination.” When Blanchet interrupted her response, Paul shut him down, saying it was her time to speak. “Your time to insult,” he grumbled. To which Paul replied, “It wasn’t an insult. It was an invitation.”

Blanchet, who seemed strangely disengaged much of the evening, made it clear right off the top that he wasn’t “very interested in leading Canada,” but would take every opportunity to defend Quebec’s interests. He did, however, generate headlines after the debate, informing reporters that the Bloc doesn’t intend to help prop up a minority government, either Liberal or Conservative, after the Sept. 20 election.

In the end, Canadians who opted to sit through the entire debate instead of watching our own teen tennis star, Leylah Fernandez, smash her way to the U.S. Open final, may feel they made the wrong choice.

And, for those who did tune out now and then to follow Fernandez to her triumph, returned to the debate wishing the party leaders had just a little of the young tennis star’s guts and glory.