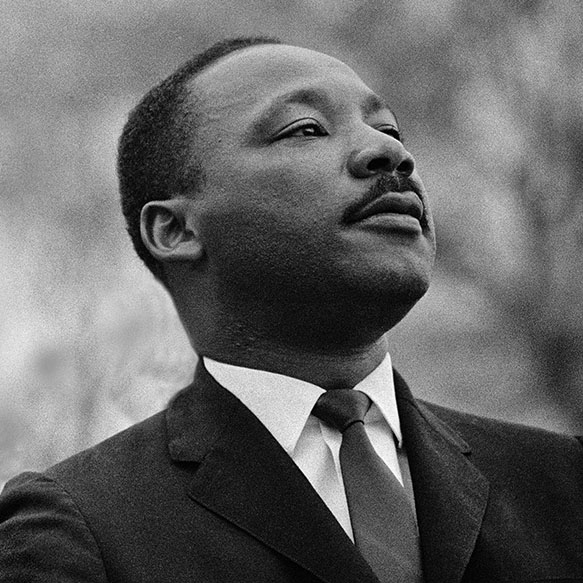 Dr. Martin Luther King, Jr. speaking before crowd of 25,000 Selma to Montgomery, Alabama civil rights marchers on March 25, 1965. As we mark Martin Luther King Jr. Day on January 17, we reflect on the lessons we can learn about combating racism and hate from the civil rights leader. Photo: Stephen F. Somerstein / Getty Images

While Martin Luther King Jr.’s birthday (Jan. 15) is commemorated annually on Martin Luther King, Jr. Day — the third Monday in January (which in 2022 is Jan. 17) — these days the legacy of the reverend and civil rights leader takes on heightened importance.

With the racial protests of 2020 and the 2021 insurrection — during which a violent, predominantly white mob took siege of the U.S. Capitol during a joint session of Congress to certify the election of Joe Biden and Kamala Harris — and its ongoing fallout, reflecting on King’s approach to such profound acts of hate helps to put our moment into context.

While King and the civil rights leaders of his time endured violence at the hands of the police or organized racist groups like the Ku Klux Klan, he was no stranger to general white mobs either. In 1966, after he moved his family to Chicago with the intent of improving the conditions for African Americans living in the city’s most impoverished areas, King was met by hundreds of white protesters who carried Confederate flags and swastikas and shouted obscenities and epithets while physically attacking him during an appearance at a park. The racist and anti-Semitic insignias on display at the Capital insurrection were almost identical to the hatred King faced 55 years ago.

Arguably, not since the 1960s has white supremacy been so front and centre in mainstream media and public spaces. It is not that Donald Trump’s presidency led to a resurgence of these groups — they have never really gone away — but that he gave them permission to come out of the shadows.

So what can we learn from King’s life to help us navigate the uncertainty of our times?

From Hero to Threat

Between 1955 to 1965, King was instrumental in one civil rights triumph after another. He spearheaded the Montgomery, Alabama bus boycott in 1955, led the March on Washington in 1963 — where he gave his iconic “I Have a Dream” speech — and, in 1965, led the Selma to Montgomery marches for African Americans to gain the right to vote.

His nonviolent approach to anti-Black racism led to widespread integration throughout the southern U.S., resulting in worldwide recognition as Time magazine’s “Man of the Year” and the Nobel Peace Prize, both in 1964. And through his persistent pressure on President Lyndon Johnson, Congress passed both the Civil Rights Act of 1964 and the Voting Rights Act of 1965. As a result, the 36-year-old King was unequivocally the most celebrated civil rights leader in the world.

Between 1966 and his assassination in 1968, however, public opinion about King changed. As time passes, we tend to forget the specifics of a social justice movement. King’s ascendency and fall as a civil rights leader is no different. While many, for years, loved him, towards the end of his life he was not as well received.

The emergence of the Black Panthers shifted the conversation on anti-Black racism from nonviolence to Black Power. A new generation of African American civil rights leaders, led by Stokely Carmichael, Huey Newton, and Bobby Seale, following Malcolm X’s assassination in 1965, grew tired of King’s nonviolent approach (as I explain in my book, Uncle: Race, Nostalgia and the Politics of Loyalty). To this new generation, King and other civil rights leaders were “Uncle Toms” because of their passivity and permissiveness in the face of white violence.

Following a speech in 1967 where he denounced America’s involvement in Vietnam, 168 newspapers criticized King, including the New York Times. The same media, which had celebrated him as Black America’s heroic leader, began to label him a threat not only to the nation (though FBI director J. Edgar Hoover notoriously hated King, and had recorded his movements for years) but also to U.S. foreign affairs.

If there is one major lesson that we can learn from King in this respect, it is that the fight for change must become bigger than one individual person.

Viewing BLM Through the Lens of King’s Experience

When King faced a white mob he’d retreat, a reoccurring trauma that resulted in many struggles ranging from depression to a profound sense of his own mortality. Today, Black activists cannot retreat — social media and the 24-hour news cycle make it virtually impossible to fully escape the threats of white supremacists.

At the same time, there is no longer a solitary male figure “leading the way” in a literal (and symbolic) sense. Instead, protests — some nonviolent, some violent — originate from multiple sources. The leaders are men, women, LGBTQ2+ and the issues are intersectional, combining both calls for social justice with demands for institutional, political, and economic change.

In other words, where King’s civil disobedience was in analog, today’s anti-Black racism movement is in 3D.

Just as people vehemently disliked King when he dared to expand his reprimand of institutions like the military, today’s Black Lives Matter activists also have their critics who disagree with their attacks on policing. And while it is important to hear critique, history has only illuminated the important role King played in changing modern history. It is very likely that history will also reveal the impact that BLM has had on the collective consciousness of our times.

King once said that, “no one is free until we are all free.” Today, BLM protesters chant, “no justice, no peace.” While we are still fighting (and winning some) battles for freedom, what these two rhetorical statements ask us to reflect upon is what it will take to finally win the war.

Cheryl Thompson is an assistant professor in the School of Creative Industries at Ryerson University.

A version of this article was published on January 18, 2021.

In 1963 Martin Luther King Jr. Gave His Iconic ” Have a Dream” Speech and Why It’s More Relevant Than Ever