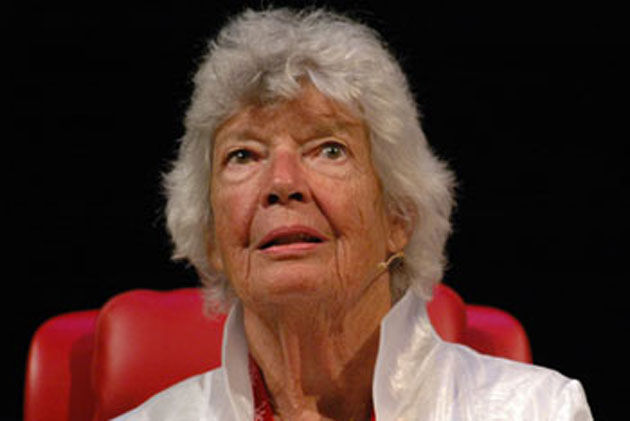 (Excerpted from Sandra Martin’s Working the Dead Beat:50 Lives that Changed Canada, which has been longlisted for the Charles Taylor Prize for Literary Non-Fiction)

After she was diagnosed with terminal cancer in 2003, June Callwood talked about gliding over Georgian Bay, contemplating all the pain she had experienced in her life and wondering whether there was “anything spiritual” that could help ease her misery.

“And I thought, floating up there, ‘This is what it’s all about. It’s kindness. Not top-down kindness, giving a toonie to a street person and treating them like a slot machine, but stopping and talk- ing to them. If people can behave well to each other, that’s all that there is,’” she told Globe journalist John Allemang. An atheist, she took that philosophy of kindness, which was as close as she could come to a religious belief, and sprinkled it liberally as she carried on her personal campaign against injustice, even as cancer rampaged through her body.

Known as a doer, a “secular saint,” a fundraiser, a civic activist, a fierce campaigner for human rights, and a “general nuisance,” she wrote thirty- odd books, more than a thousand magazine articles, close to five hundred newspaper columns, and hosted at least two television shows, In Touch and National Treasures. She helped establish fifty organizations—more than most people join in their lifetimes. The institutions range across the arts, human rights, civil liberties, and social welfare. In recompense, she was given nearly twenty honorary degrees, named a Companion of the Order of Canada, and had a street, a park, and Ontario’s volunteerism award named in her honour.

Life itself inspired her activism. Her mother and father were inept as parents, so she learned early on “to take care of myself and live in my imagination, and as soon as I could find books, I was reading them.” Words became magic for Callwood. She used them to persuade, denounce, and describe. They were the source of her livelihood, her prodigious influence in effecting social change, and her solace.

She also had two grandfathers “who were crazy about me,” so she didn’t mind her parents’ lack of attention, because she was loved and praised. “I grew up thinking people take care of one another and you have to do that to be a good person; you have to be available to help others. And I also grew up fearless, so that helped.”

Her self-confidence took perennial tumbles when it came to her vocation. “Fear of failure is huge with me in writing. I have never written something I thought was good enough,” she said in an interview five months before she died on April 14, 2007. Of all the books she wrote, she never attempted a memoir.

“I’m not very introspective,” she explained. “I don’t think there are a lot of complications about me.” Besides, she was never sure she could write about her life without colouring her memories, and the reporter in her wouldn’t allow that.

Sandra Martin is the obituary columnist at the Globe and Mail. She has won the Atkinson and Canadian Journalism Fellowships and multiple National Magazine Awards. She is the editor of the critically acclaimed collection The First Man in My Life: Daughters Write about Their Fathers. She lives in Toronto.

Reprinted from Working the Deadbeat: Fifty Lives that Changed Canada, C 2012 by Sandra Martin. Reproduced with permission from House of Anansi Press Inc.