The Power of Naps 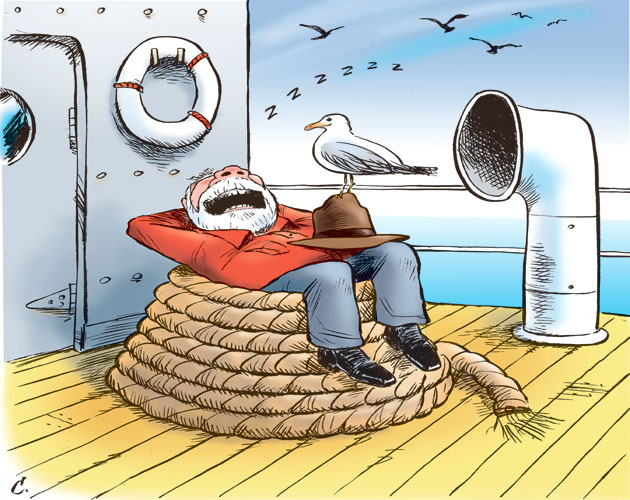 The nest. I close my eyes and I’m curled up in it again; the rough fibres rasping my cheek, the co-mingled aroma of deck tar and sisal and salt air, the muted laments of gulls wheeling overhead.

I discovered the nest as a teenage deckhand aboard a tanker hauling heavy crude from Venezuela to a Dartmouth refinery. The pay was pitiful and the work was drudgery, but the food was good, the scenery was glorious and the company was fascinating. I worked with a Jamaican crew whose skin colour ranged from deepest aubergine to café au lait. They spoke a patois so impenetrable it took me three days to realize it was a variation of English. One day when I was moving even slower than usual, my shipmate, Henry (or ’enREE as everyone knew him) looked at the white kid and clucked, “Im taiad. Im wan’ de nais.”

“Im taiad” I sussed out – he was saying I was tired. But he also claimed I was in need of … “denais”? What was that? Venice? An ace? Some Maracaibo lady of the evening named Dennice?

The “nest” is what he was saying. Henry thought I needed some time in the nest, a small mountain of hawser line, which lay on the afterdeck. This was serious rope such as you find on serious ships – as thick as your calf and meticulously coiled into a “nest” taller than a man. It looked like a giant bagel and, bagel-like, had a hole in the middle. A hole big enough to accommodate a man who was “taiad” and ready to curl up for a snooze.

The nest was a glorious place to zonk out when the bosun wasn’t looking. It made me a lifelong fan of the power nap.

Not that I needed much help. I’ve always been gifted when it comes to sleeping. My Boon Companion says I could sleep on a picket fence – an exaggeration but only a slight one. I’ve drifted off in cinemas, street cars, staff meetings, weddings, funerals and one time, perilously, on horseback.

And I’ve paid for my gift. I’ve had my knuckles smacked by a schoolteacher’s yardstick. I’ve been rudely elbowed back to consciousness by family, movie companions and once, during a moment of, shall we say, intense romantic entanglement, I was physically thrown off a bed (I still deny I was snoring).

1) Find a “nest.” It has to be cozy, quiet and preferably dark. If you can’t arrange that, settle for cozy and invest in an eyeshade and ear plugs.

2) Set your alarm to go off in 20 minutes. That’s all you need. Any more and you’ll be into a heavy sleep cycle and wake up feeling groggy.

3) Put a sign on your hotel room/office/car door: Caution: Power Nap in Progress.

4) No brainer: Get up as soon as the alarm goes off.

Remember, these are tips from a seasoned pro. Follow them faithfully and you’ll be sawing logs in no time.Well, 40 winks at most.