Snapshot: Paul Saltzman and The Beatles in India 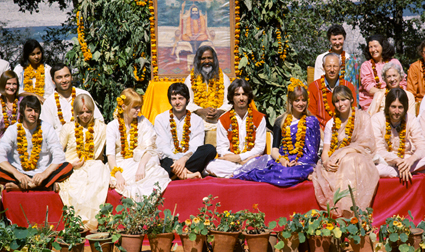 In 1968, acclaimed Canadian photographer and filmmaker Paul Saltzman was a 23-year-old sound recorder who schemed himself a spot as part of a National Film Board (NFB) documentary film crew shooting in India. What Saltzman didn’t know was that what started as an exotic working trip would become an unexpected odyssey of agonizing heartbreak and life-altering self-discovery that included shooting some of the most iconic images ever taken of the Beatles.

As a featured speaker at the Toronto-based Legends Gallery of Fine Art Photography recently, Saltzman recounted the remarkable story of how he wound up photographing the Fab Four at Rishikesh and an enlightening encounter he had with John Lennon.

Like most other 23-year-olds in the late 1960s, Paul Saltzman was a fan of the Beatles. Even today he remembers rushing down to Sam the Record Man in downtown Toronto the day the album Revolver came out and how he and his girlfriend lay in the grass together, the sun beating down on them both, smoking a joint and listening to the album’s final song, “Tomorrow Never Knows.”

Still, the Beatles were not the reason Saltzman originally itched to visit India.

“There was a [NFB] director going to shoot a documentary in India and … I said, ‘I’d like to work on your film,’” Saltzman says. “And he said, ‘I’m not taking anyone from here … He asked me if I’d ever done sound. Without hesitation, I said, ‘Absolutely.’ [I was] lying through my teeth.”

The director agreed to take Saltzman on if he could get himself to India. The gig, Saltzman laughs, paid $500. A round-trip flight to India in 1968 cost $550.

Saltzman made the trip and, after working on the film for six weeks, took a detour to Delhi. That’s where he received a letter from his girlfriend, “who I was crazy about, and she was crazy about me — when I left.

“I opened the letter very excited, and the first sentence was ‘Dear Paul, I’ve moved in with Henry.’ And I was devastated. I don’t remember anything else.”

At the suggestion of an American acquaintance, Saltzman attended a lecture given by the Maharishi at a university in New Delhi.

“I only remember one thing the Maharishi said on stage … ‘Meditation takes you beneath and below your daily worries and concerns to a place of inner rejuvenation from which you come back renewed and refreshed.’”

Paul was sold. He took a train to the Maharishi’s ashram, only to be told by the guard at the gate that it was closed because the Beatles were there with their wives.

“I don’t remember the words I used but I basically said, ‘I’m in agony. You have to teach me meditation.’”

The guard offered the young man some tea and went to speak with the Maharishi on his behalf. Saltzman waited by the gates for hours until the guard returned with a messaged from the Maharishi: “Not at the present time.”

Saltzman, weighed down by the agony of his lost love, asked if he could wait there. The guard agreed.

He was directed to a tent along a trail in a national park next to the ashram. The trees bustled with monkeys, parakeets and other wildlife. A cliff overlooked the Ganges River.

“It was idyllic and beautiful, and the Ganges (flowing) along below.”

Saltzman lived in the tent for eight days, alongside a second tent that housed the tailor responsible for all of the handmade clothing worn by the Beatles and other guests during their stay. He remembers seeing the Maharishi every once in a while and believes that the spiritual guide came to trust that he truly did want help and wasn’t just there to meet the Beatles.

“It was in a certain sense bad news for me that (the Beatles) were there because I couldn’t get in, and I was hoping meditation would make a difference in the heartbreak.”

Finally, after eight days, the Maharishi allowed Saltzman in. It took him five minutes to learn how to meditate.

“It was an absolute miracle. I came out of the meditation, and the agony of the heartbreak was gone,” Saltzman remembers, as if recalling an epiphany. “The heartbreak took longer to get over, but the agony was gone in one 30-minute meditation.”

He decided to take a walk around the ashram grounds, still abuzz from the healing effect of the meditation, when he came upon a long table near the cliff.

“I saw John and George and Paul and Ringo and Cynthia Lennon and Jane Asher was with Paul. And Maureen, Ringo’s wife, and Patti Boyd Harrison with George, and Donovan and Mia Farrow was there and Mike Love of the Beach Boys and Mal Evans, their roadie.”

From that moment, Saltzman spent the next week with the group, taking the photos that would prove some of the most celebrated images in the lexicon of rock ’n’ roll photography. One day in particular stands out, when the entire group was eating at a table and everyone got up to leave except Saltzman and John Lennon.

“We’re sitting opposite each other, and he’s writing in his notebook and, after a moment or two of quiet, he closes up the book and he looks at me and … says in a very kind way, ‘How come you’re here?’” Saltzman says.

He wasn’t sure if Lennon would want to listen to him spill his story of woe, so he responded: “‘Heartbreak, meditation, miracle.’ I just spoke for 30 seconds.”

John looked away for a few moments before turning back to Saltzman.

“And he said, ‘Ah yes, love can be very tough on us sometimes, can’t it?’ And I (agreed). He looked away again for a moment and then he looked back and said, ‘But you know, Paul, the really great thing about love is you always get another chance.’”

Saltzman affirms that Lennon’s observation held a lot of meaning for him in that moment, offering a wider perspective to the heartbreak he was so desperate to overcome.

“It was very helpful,” Saltzman says, as a smile creeps across his face. “And I thought he was talking about me.”

Back in Canada a few months later, Saltzman heard the news that Lennon and Cynthia had broken up and that the Beatle was now with Yoko Ono.

“Mal Evans told me back at the ashram … that John had already fallen in love with Yoko, and Cynthia came to India with John in the hopes of putting their marriage back together,” Saltzman reveals. “And by the way, all the Beatles and their partners were quite close with each other except John and Cynthia. You could just see it. You could feel it.”

As Saltzman absorbed the news of Lennon’s new love, he realized that back in India, as John mused about love and second chances, he wasn’t only reflecting on Saltzman’s situation, but also his own.