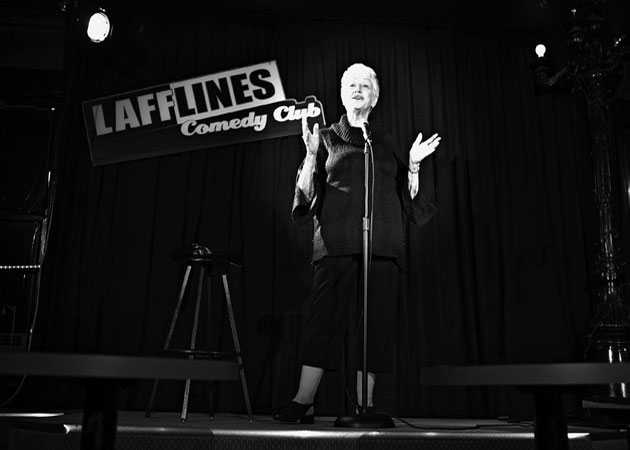 When her adult daughter suddenly died, Mavis Pickett took to the stage to heal.

Twelve years ago, Mavis Pickett’s 30-year-old daughter was skiing when she plunged 275 metres to her death down the side of Blackcomb Mountain in Whistler, B.C. It’s the kind of tragic loss that leaves you wondering how you’ll ever cope. If you’re Pickett, you become a stand-up comic.

While taking a counselling course, she heard of a psychotherapist and comic named David Granirer who taught classes on how to heal grief through humour. So Pickett signed up, thinking it might help. “The first night of class, he wrote on the board, ‘Stand-Up Comedy Clinic,’ and I just about fainted,” says the grandmother of four, who was 63 at the time and is now 75.

“At the break, I told him I was in the wrong course.” Granirer challenged Pickett to stay and told her she might learn some ways to deal with her grief, so she agreed to give it a shot.

During the fifth week of class, students were required to perform before an audience at Lafflines Comedy Club in New Westminster, B.C. Pickett, a retired educator, was terrified and came close to taking a failing grade, but when her teacher told her to finish what she had started, she thought of her daughter.

“Mavis Anne was very bright, but she had one failing: She thought I could do everything. I couldn’t give up because she would be so sad if I did,” Pickett says.

Her first night performing as a “ditzy” senior, as she describes her comedy persona, was a hit. Word spread and soon Pickett’s phone was ringing with offers for more gigs (seniors’ centres and retirement parties are favourites), interviews on the CBC, articles in newspapers and spots on national TV talk shows.

Pickett’s brand of humour is tamer than some of the “raw” comics she’s performed with at clubs. “I don’t swear in my act, and that’s not a prudity. I just couldn’t pull it off,” she says.

But ultimately, stand-up comedy has been a great equalizer. “Age has nothing to do with it,” she says. “We are all paddling this canoe of getting laughs, and it’s the most difficult thing I have ever done.”

So has the comedy helped Pickett cope with her grief?

“At the beginning, your grief just rolls around in your head like a whirlpool and that comedy break, even if it’s just for five minutes, stops the whirlpool,” she says. “It’s not going to take it away, it’s not going to fix it, but you have a break from it.”