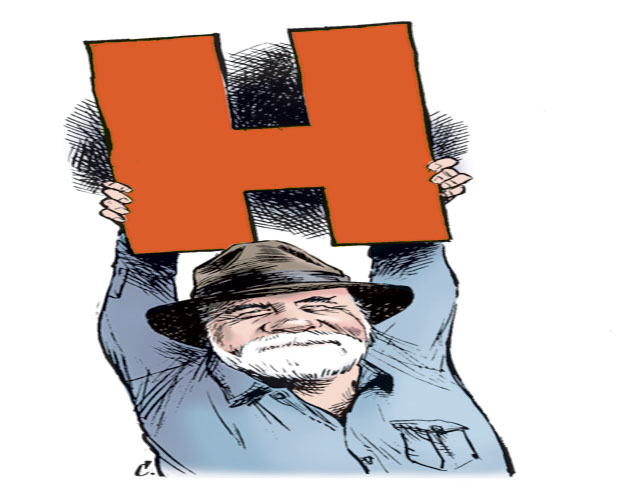 Arthur Black studies the strength of the letter H.

Consider the letter H. Such a sturdy little one-rung ladder of a letter. A harbinger, too, of hardy, healthful words beginning with H. Ten-dollar words like harmony, hospitality and heartfelt. Simple words like haven, home and hearth. And, of course, happy.

But then there’s Haiti. Also an H word but hardly a happy one. A devastating earthquake reduced what was already a basketcase of a country to something beyond horrible.

Sounds blasphemous, but there’s an upside to what happened in Haiti. It moved us. Hard on the heels of the terrible news came a massive, spontaneous outpouring, a global chorus of “What can we do?” — and nowhere deeper or stronger than from Canada. Even Bill Clinton was flabbergasted. “It has been unbelievable,” said the former U.S. president. “The Canadian people are so generous. I’ll bet you on a per-capita basis they’re number 1 in the world helping Haiti.”

That was the amazing part — the “per capita.” The millions that flowed from the coffers of Ottawa could be taken for granted — that’s just how Canada behaves on the world stage. What was not foreseen was the response from ordinary Canucks. Tins and jars appeared on office desks and by cash registers, all marked “For Haiti.”

Anonymous citizens emptied their purses, tossed in crumpled fivers and ten-spots or scribbled hefty cheques. Kids in classrooms across the land chipped in their loonies and toonies.

A lady I barely know emailed me a shaky, raw video that a boyfriend of her niece had put together. The video, of Port-au-Prince before and after, was amateurish, slapdash and utterly heartbreaking. It told you where to send money, and we did. We had to.
The firefighters at our local fire hall put out an empty fireman’s helmet on the fender of the town fire truck. They collected $6,000 the first weekend.

We could even text financial aid to Haiti on our cellphones. Tens of thousands of Canadians thumbed it in. For those of us less dextrous, Google works. Typing “Haiti relief” into the search box gets you more than 40 million hits. We’ll never know the real total, but ordinary Canadians have ponied up more than $100 million for Haiti, which will be matched by the federal government. That’s not counting the food, the clothing, the medicine or the soldiers and civilians who gave their expertise and sweat on the ground.

Haiti remains devastated but, after decades — centuries, really — of paralysis, it’s stirring. For the first time in memory, Haitians can dare to hope — another H-word.

The Haitian disaster may even make the world a happier place. A recent University of Virginia study asked the question: What makes us happy? It discovered, for starters, a lot of things that don’t.

It doesn’t help to be filthy rich. It makes no difference if you’re brilliant. A retiree in Victoria is no happier than a plumber in Iqaluit. It doesn’t really matter if you look like Johnny Depp or Quasimodo, Jennifer Lopez or Susan Boyle. It’s immaterial if you’re younger than springtime or older than dirt.

What matters, happiness-wise, is that you give.

A pint of blood or a spare kidney; a benefit concert at Massey Hall or an afternoon each week sorting clothes at the Sally Ann Thrift Shop. A loonie in a wino’s ballcap or a million-dollar endowment to your alma mater.

Or help for Haiti.

It’s our choice. We can spend our spare cash on boob lifts, Cartier watches, golf club memberships or back-to-back round-the-world cruises, but we all know, in our (H-word alert) heart of hearts, it won’t work. Giving works. It makes you happy.
Speaking of H-words: that study I mentioned is entitled The Happiness Hypothesis. Name of the author?

Haidt. Jonathan Haidt. Holy Hannah. Or, if you prefer, Hallelujah.

Arthur Black is the author of 12 books of humour and three-time winner of the Stephen Leacock Medal for Humour.