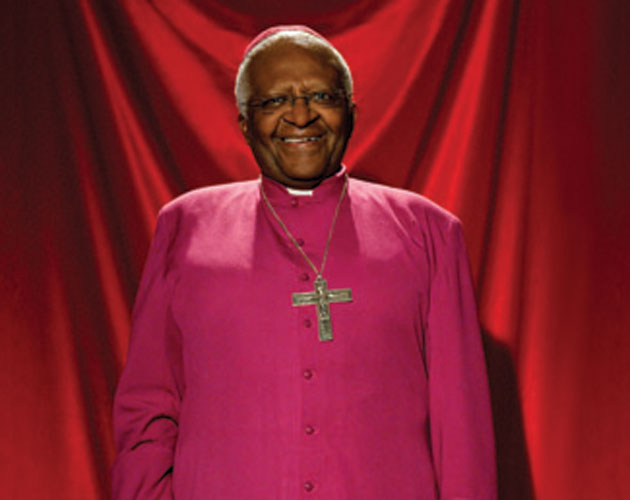 He’s been called South Africa’s moral compass, the man who leveraged his pulpit to admonish wrongdoing and set his country on a more equitable path. His critique of apartheid made him one of South Africa’s most beloved figures – and a Nobel Peace Prize winner in 1984. It also led to his appointment by Nelson Mandela to chair South Africa’s Truth and Reconciliation Commission in 1994. Tasked with investigating crimes during the apartheid era, Tutu’s tactic of togetherness helped the country toward its path of healing. He completed the final report in 1998.

“Differences are not intended to separate, to alienate. We are different precisely in order to realize our need of one another,” he has said.

He was awarded the Gandhi Peace Prize in 2005 and the 2009 Presidential Medal of Freedom for his efforts. So who better to inspire us this time of year than Archbishop Desmond Tutu, for whom championing human rights was a call to action and giving back a call of duty.

Of course, time marches on, even for those who defy it. Last year, Tutu announced he was stepping down from his public duties as prelate of the Anglican Church of South Africa, claiming it was time to focus on home. His last official appearance saw him dancing on stage with the Black Eyed Peas before the opening match of the World Cup, hosted by South Africa in 2010.

Retired or not, the Archbishop remains an activist to his core. He recently shared a summer afternoon with Michelle Obama at Cape Town’s newly minted soccer stadium, helping her advance the issue of HIV-AIDS and the importance of sports to children’s health. Tutu also shared his fighting spirit with Canada, as one of eight Nobel Peace Prize recipients who signed a letter asking Prime Minister Stephen Harper to stem the expansion of Alberta’s oilsands.

“Arch” to those who know him well – and even to those who don’t – celebrated his 80th birthday in October at St. George’s Cathedral in Cape Town.

Never one to shy away from controversy, Tutu rebuked the South African government, comparing it to the former apartheid regime for capitulating to the demands of its trade partner, China, by refusing the Dalai Lama a visa to enter the country for Tutu’s birthday celebrations.

Then there’s the work with the Elders, a group of global leaders inspired by Sir Richard Branson and Peter Gabriel and organized by Nelson Mandela in 2007 with the mission of advancing peace and human rights in the world. As chair, Tutu has led missions to Zimbabwe, Israel and Sudan, headed a “healing and reconciliation” trip to Côte d’Ivoire and travelled to Cyprus in support of grassroots initiatives in the divided country.

So it would seem that taking it easy is just another challenge for Cape Town’s Archbishop Emeritus.  —Elisa Birnbaum