Top Of The World 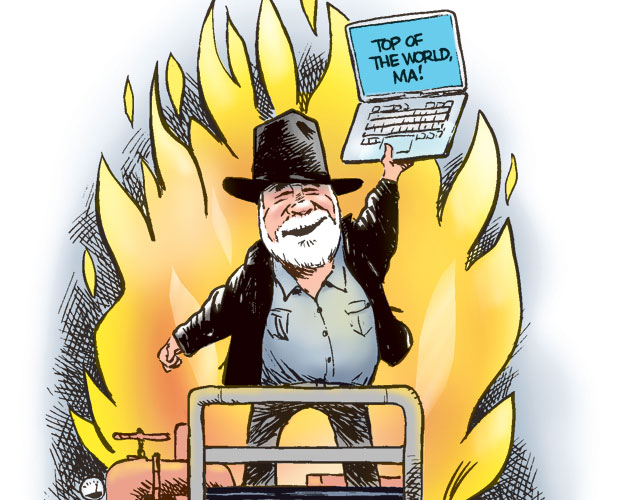 Arthur Black on the ancient curse of the mummy.

I am all right. Stop worrying about me.

She never will, of course. That’s what moms do, be they from Egypt, Ethiopia or Eglinton Avenue West. They do worry and they do hang on. It’s their job.

Uncharitable observers sometimes put it down to a power grab on mom’s part — and there has been a bit of that down through history. Legend has it that a soothsayer once told Agrippina, heavy with child, that her offspring, if he lived, would become Emperor of Rome — and that he would murder his mother. Agripinna, keeping her eye on the job security ball, replied, “Let him kill me, then.”

Two millennia later and many miles north and west, another mother nurtured an infant amid dreams of monarchical glory. The Duchess of Kent groomed her little princess for the British throne virtually from birth. The princess lived with mommy dearest 24 cloistered hours a day. The child was forbidden to speak to anyone, except in the presence of Mother or her strict German governess. On the day of her ascension to the throne, the Duchess of Kent asked her newly crowned daughter, barely 18, if there was anything else mommy could do for her. “I wish to be left alone,” she replied. The new Queen’s wish was everyone’s command. Her bed was removed from her mother’s chambers that very day, and young Victoria began her 65-year reign over the British Empire — with, I have no doubt, her mother clucking and tut-tutting impotently in the wings.

It’s just what mothers do. A playwright by the name of Florida Scott-Maxwell observed: “No matter how old a mother is, she watches her middle-aged children for signs of improvement.” I endorse the notion. My mom, bless her, slackened the apron strings enough to let me go to sea at 16 and to Europe with a backpack at 20. A few years later, when it became clear that I would scribble for a living, she gave that her blessing too — but not wholeheartedly. I remember telling her that I had a cushy new job with my own office — a secretary, even — writing in the PR department of a prestigious international company. She smiled encouragingly, patted my hand and turned away, murmuring something.

“What’d she say?” I asked my older, brighter sister. My sister shook her head — sibling code for, “Not now, stupid. I’ll tell you later.”

When Mom went out to the kitchen, my sister leaned over and said, “She’s very happy about your success — she just wishes you had a real trade to fall back on.”

My mom was a farm girl. She came from Real Life, where people worked up a sweat and strained their backs and soaked their aching feet in a basin full of hot water and Epsom salts at the end of the day. I don’t think she ever quite believed that the world contained people dumb enough to pay her son for rearranging words on a page.

It wasn’t that she was disappointed in me, just … apprehensive that someday reality might give me a cuff on the back of the head.

Good old Mom. If she was still around, I’d make her smile with my best Jimmy Cagney impression. “Top o’ the world, Ma!” I’d cry, waving my arms like Sid Crosby in overtime.

And she would remind me that in the movie, Cagney got tear-gassed, plugged full of bullet holes and blown up along with the gasoline storage tank he was standing on.

Moms worry.  They can’t help it.

’Twas ever thus. That note from the Egyptian girl I mentioned at the top? You’ll find it in the Metropolitan Museum of Art. It was written on papyrus — about 4,000 years ago.