Tune Into Your Body With a Yoga Tune-Up 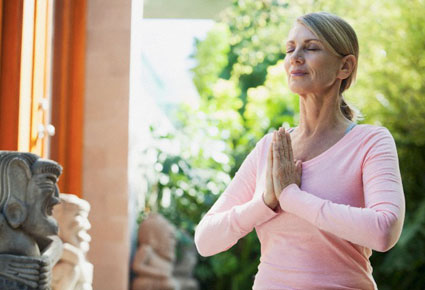 Jill Miller’s enthusiasm is rousing, even over the phone. Of course, she’s been cultivating a passion for her craft since age 11 as a self-described “fat kid.” That’s when she started practising yoga and, 30 years later, she’s finding body blind spots; areas of the body that are overused, underused, misused or abused as she explains it.  “I find everybody’s blind spot,” Miller declared. “I find their pain, I find what they’re not admitting too, I find stuff they don’t know they had and the Yoga Tune Up works to expose that.” That’s her brand of mindful bodywork.

Miller says boomers make up a large portion of Yoga Tune Up users because they are interested in learning about their bodies and how to stay active and healthy longer.  “My whole system is about empowering people, no matter what type of athletic prowess they have,” Miller explained. That system includes DVDs, online streaming of short five to 10 minute sequences and classes with Miller or Miller-taught trainers (currently available across Ontario and Saskatchewan.)

Miller says she’s always wanted to help people and wants to “wake them up” the way she was by yoga and fitness. She’s studied massage and holistic therapy, taken anatomy and modality classes to meet that goal. “I want to empower people to take control of their own self-care so that somebody else doesn’t take control of your care down the road,” Miller says. “If you don’t use it, if you have abused it, somebody else is going to be finding it for you in the end. Whether that’s through an MRI, a surgeon’s scalpel or what have you.” In fact, Miller developed one of her DVDs, Quickfix RX Kneehab for her own mother’s injury issues.

Miller says her programs are aimed to eradicate pain, improve posture and enhance performance, no matter what your thing is. “Whether it’s yoga. Whether it’s knitting. Whether it’s sitting on the ground with your grandchild or doing a triathlon,” and she added enthusiastically, “because you know, silver streakers do triathlons.”