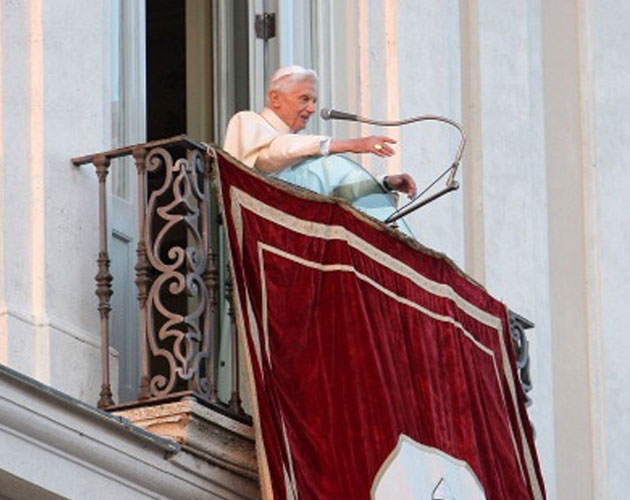 The Pope flew by helicopter to his summer residence today, officially returning to life as Cardinal Joseph Ratzinger, or, on more formal occasions, His Holiness Benedict XVI, Emeritus Pope.

Before departing, the Pontiff made a farewell speech to hundreds of thousands in St. Peter’s Square and to billions more around the world who he’s served as Pope for eight years.

When elected in April 2005, Benedict XVI went out of his way not to attempt to emulate his predecessor, the immensely popular, crowd-pleasing and media friendly, Pope John Paul II. He seemed uncomfortable in the limelight and disinterested in taking part in photo-ops. Instead of travelling, he concentrated his efforts on strengthening the Church from within and reestablishing ties with Anglican communities and Traditional Catholics groups who had been estranged from the Church.

In his farewell address yesterday, he told Catholics while he no longer “wield[s] the power of the office for the government of the Church,” he will remain in the “service of prayer.”

Answering the question on everyone’s mind – why he’s the first Pope in 600 years to resign – he said: “In recent months, I felt that my strength had decreased, and I asked God with insistence in prayer to enlighten me with His light to make me take the right decision – not for my sake, but for the good of the Church.”

He also hinted at the difficulties of leading a Church mired in scandals whose message is increasingly ridiculed in today’s secular society. ”The Lord has given us many days of sunshine and gentle breeze, days in which the catch has been abundant; Then there have been times when the seas were rough and the wind against us.”

And he spoke of the demands of leading a billion-member church: “He, who assumes the Petrine ministry no longer has any privacy. He belongs always and totally to everyone, to the whole Church. His life is, so to speak, totally deprived of the private sphere.” When he was elected Pope, he recalled saying to God: “It’s a great burden you have placed on my shoulders.”

And besides his speech, the Pope also tweeted his final goodbye: “Thank you for your love and support. May you always experience the joy that comes from putting Christ at the centre of your lives.”

The Cardinals of the Church will meet beginning on March 1 to discuss when to hold the conclave that will elect the next Pope. About 115 Cardinals from all parts of the world are expected to attend, including three from Canada.

Now that the Seat of Rome is officially vacant, Catholics can begin betting on who their next Pontiff will be. Here PaddyPower (Ireland’s biggest betting shop) lists the early favourites: