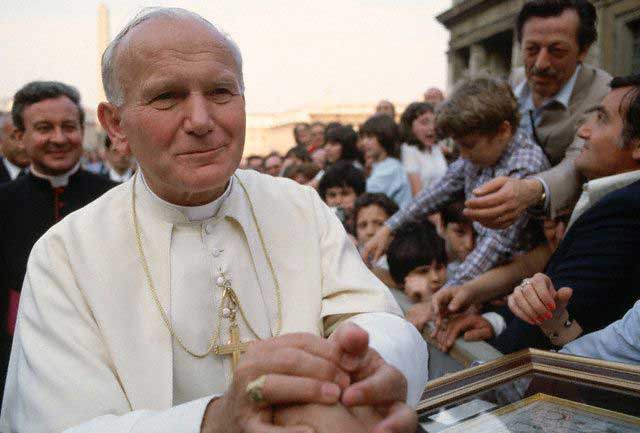 The mourners chanting “Santo Subito!” (“Sainthood Now!”) during the funeral of Pope John Paul II may soon get their wish. A veneration, beatification, and two miracles later, the beloved former pontiff is on the cusp of canonization.

Earlier today, a commission of bishops and cardinals gave the thumbs-up to approving John Paul II – affectionately referred to by many as John Paul the Great – for his saintly stripes, according to the ANSA news agency.  All that remains is a decree from Pope Francis, which is expected.

John Paul II, born Karol Józef Wojtyła in Poland in 1920, ascended to St. Peter’s seat on Oct. 16, 1978 and held the position until his death at age 84 on April 2, 2005. His papal reign, at 26 years, stands as the second-longest in history behind only Pope Pius IX, who served 31 years (1846-1878). The key to his canonization lies in the two miracles, both posthumous, attributed to him – the first was the healing of Sister Marie Simon-Pierre, a French nun, who suffered from Parkinson’s Disease and prayed for the pontiff’s intervention; the second coincided with John Paul II’s beatification, and resulted in the curing of a sick woman from Costa Rica. Both miracles were verified by Vatican officials and doctors to ensure there was no medical explanation.

Some reports suggest that John Paul II, along with Blessed Pope John XXIII (pope from 1958-1963), could be canonized by the end of this year. They’d be the first pontiffs to receive the divine honour since Pope Pius X in 1954.