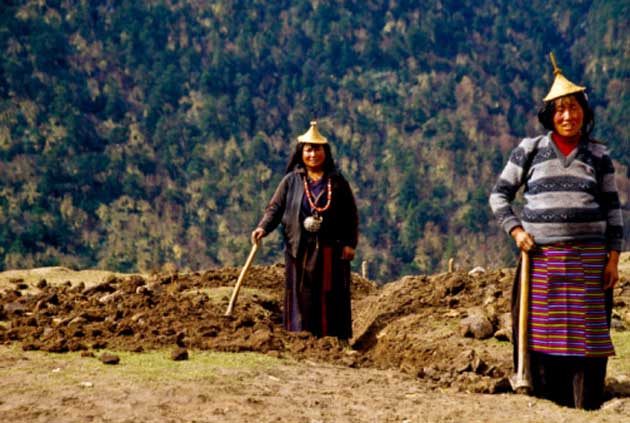 What do they know that we don’t? Mariellen Ward travels east to investigate the Bhutan Happiness Initiative.

EACH STEP UP THE mountainside was agony. I felt nauseous, weak and frequently stopped to sip juice, catch my breath or – once – vomit by the side of the path. I was in Bhutan and I was climbing 3,000 feet up to visit the country’s premier tourist attraction, Paro Taktsang (Tiger’s Nest) Monastery and I felt awful.

Taktsang is Bhutan’s Taj Mahal, a sublimely beautiful, man-made marvel inspired by faith. It’s a jumble of small, white, gilded oriental buildings clinging to a rock face high above the Paro Valley, built on the spot where Guru Rinpoche, the founder of Buddhism in Bhutan, is said to have landed on the back of a flying tigress in the eighth century.

That morning, I woke up with several symptoms of altitude sickness. By 8 a.m., when my guide, Kuenzang, and driver, David, picked me up from my hotel, the Uma Paro – a luxurious and authentically Bhutanese COMO-owned boutique property in the mountains outside of Paro – I was exhausted and dehydrated. They were shocked to find I still wanted to set out on an arduous, uphill climb.

But I had to go – it was the only opportunity in my schedule, and walking was the only way (aside from donkey back, which has to be arranged ahead of time). So I trudged, painfully, for hours, with the help of my caring guides from the Uma Paro, who carried my gear – and hopes. Finally, we reached the resting point, about halfway up, a café with a terrace directly across a dramatic chasm from Taktsang. I stopped, spent – and satisfied. I sat down facing the spectacular view, took out my camera, opened my thermos of tea and told Kuenzang that I didn’t need to go all the way up; I was happy here. And here, I learned the Buddhist definition of happiness.

“You are happy because you are at the mid-point,” Kuenzang said. “This is what we call the middle way; the halfway point between not enough and too much.”

And happiness was why I was in Bhutan. The country’s groundbreaking Gross National Happiness (GNH) policy has put an otherwise small, remote Himalayan mountain kingdom on the map. In the 1970s, the fourth king of Bhutan made the happiness of his people the guiding goal of development in Bhutan. He is quoted as saying, “Gross national happiness is more important than gross domestic product.” The adoption of a GNH index was concurrent with the coronation of the fifth king, popularly known as King Khesar, in November 2008. The purpose of the index, developed by the Centre for Bhutan Studies (CBS), is to reflect GNH values, set benchmarks and track policies and performances of the country.

I stopped by CBS in Bhutan’s capital, Thimpu, to speak with researcher Tshoki Zangmo, who was wearing a dark-blue kira, the traditional Bhutanese dress for women. “The GNH tries to achieve a balance of material and non-material aspects of life,” Zangmo says. By balance, I suggested she meant Buddhism’s “middle path,” and she agreed. “As a Buddhist society, we are trained to think this way, it’s in our culture.”

The purpose of the GNH index is to make sure that Bhutan’s material development is in line with the four pillars of GNH: environmental
conservation, cultural preservation, sustainable development and good governance. And, since the onset of the global economic contraction, Western nations were taking an increasing interest in Bhutan’s GNH.

In recent years, both Britain and France have begun to develop happiness indexes and, in April 2011, the Canadian Index of Wellbeing (CIW) was launched. According to the website, the CIW will track changes in eight quality of life categories, or domains: democratic engagement, living standards, healthy populations, time use, leisure and culture, community vitality, education and environment. Reports are available about each domain, and the CIW is planning a single number indicator that will move up or down and provide a quick snapshot of whether the overall quality of life for Canadians is getting better or worse.

In Thimpu, I met with Canadian “happiness consultant” Ronald Colman, whose non-profit research group, GPI Atlantic, developed the Genuine Progress Index (GPI) – a type of happiness index – for Nova Scotia. He is in Bhutan to work on several GNH implementation projects. “The work I do doesn’t deal directly with happiness,” he says. “It deals with conditions of happiness.” When Bhutan’s king proposed the GNH, he did not mean happiness in the sense of a passing, subjective mood, he meant well-being, a deeper sense of contentment. Certain conditions have been proven to give greater opportunities for well-being, such as an adequate standard of living, clean water and a safe and peaceful environment. “People have to make personal efforts to be happy,” Colman says. “What a government can do is paint a canvas; and if that canvas is conducive to individuals realizing their own happiness, then it’s performing a very useful and important function.”

The indicator most nations use as a traditional measure of a country’s well-being is the Gross Domestic Product (GDP), which measures “everything except that which makes life worthwhile,” according to the late Robert Kennedy. Happiness and well-being indexes try to measure all the worthwhile stuff – and help governments with decision-making. In Bhutan, every new policy and development is screened to ensure it is in line with GNH pillars.

ARE THE PEOPLE OF BHUTAN HAPPY? According to tourism officer Thuji Nadik, at the Tourism Council of Bhutan (TCB), Bhutan has recently adopted the phrase “Happiness Is a Place” as their promotional tag line, after a proverb that says, Happiness is a place between too little and too much.

In neighbouring India, I spoke with Yogi Vishvketu, who teaches yoga at various studios across Canada, and in Rishikesh, India, at the Anand Prakash Yoga Ashram. He grew up in a village in northern India and now lives half the year in north Toronto. “If your happiness depends on the material world, you will never be satisfied,” he says. People in his village in India didn’t have a lot of stuff, but they were happy. His advice? “Think less. Meditate for 20 minutes each day and connect to yourself. If you live truthfully what you are, you will have no fear, no competition and you can’t fail.”

Back in Canada, I searched out the Western equivalent of a spiritual teacher: a therapist. Dr. Frances Khanna is a psychologist and Gestalt therapist in Toronto and though she says that therapy can help people achieve happiness, it is not the goal: “The goal is to address what gets in the way of satisfaction, what gets in the way of feeling – things like beliefs, ideas, body armouring.” According to Gestalt theory, if you allow all of your feelings to flow, including unhappiness, you will, paradoxically, be happier. “Therapy can help people resolve what’s unfinished from the past to make a more spontaneous life possible,” she said.

In the West, there is a large and growing amount of research on happiness that includes the World Database of Happiness in the Netherlands. A recent cover story on happiness in The Economist described the “happiness
u-bend of life”: young people and old people are the happiest, with the nadir of happiness around age 46. And there are happiness conferences, like the Conference on Happiness and Public Policy that took place in Ottawa in 2010, co-hosted by the Ottawa-based Centre for the Study of Living Standards (CSLS) and Toronto’s Institute for Competitiveness and Prosperity (ICAP). This conference grew out of a 2010 Canadian happiness study conducted by the CSLS and ICAP, which found that Canadians are generally happy and that happiness is not governed by household income; it is predicated more on health, community involvement, employment and marital status.

Delving into the research on happiness, several patterns emerge. One, it’s tricky to define happiness because there is both a passing, subjective feeling of happiness, a mood; and there is a deeper, more profound idea of happiness that could be better described as well-being, or flourishing. Two, no one can agree on how to measure happiness. Three, no one can agree on how to achieve happiness. What everyone does tend to agree on though, is that money does not buy happiness. According to the happiness economics entry on Wikipedia, “Once wealth reaches a subsistence level, its effectiveness as a generator of well-being is greatly diminished.” Research and common sense show that the things that make us happy are strong social networks, healthy relationships, satisfying work and the ability to find meaning in life. And then there’s choice.

According to spiritual author Dr. Deepak Chopra, whom I spoke with when he addressed ideaCity (a ZoomerMedia property) in June 2011, the conditions of your life only account for about 10 per cent of your potential happiness – the rest is up to you. You can change your “set point” for happiness through meditation, he says and, “make choices that really bring fulfilment – where you have meaning and purpose in life, where you are creative and know how to make other people happy.” Therapy, meditation, living simply, thinking positively and making the right choices, however, can only take you so far. According to Chopra, “the social research doesn’t address the big problems of unhappiness, which are existential: growing old, fear of death, fear of disease … For those, the great wisdom traditions say there is only one cure: get rid of your false identity, which is a socially induced hallucination … true enlightenment is a shift in identity from the personal to the transcendent.”

In other words, there’s more to happiness than pure pleasure; to be truly happy, you need to be on a spiritual journey. You need to discover your true identity, who you really are, in a spiritual sense. Perhaps “within” is the last frontier and the promised land of happiness we have been searching for.

In Bhutan, I stopped at a Buddhist gathering at an ancient temple in Paro. Mostly elderly Bhutanese in traditional dress carrying prayer beads were seated on the sunny lawn around the tiny, overflowing temple. Their lined faces were etched with the marks of life, the hard work, sorrows and passage of time; and yet I saw wisdom, serenity and sanctity in those faces, too. As I sat and listened to the monks’ hypnotic Tibetan-like chanting and returned shy smiles, I felt completely at peace, at one with the eternal timelessness of the moment. I felt happiness.