Putting the “Men” in Menopause 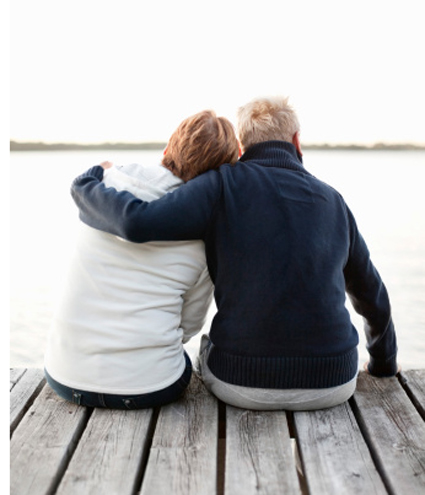 Gentlemen, prepare to have your minds blown: menopause may be the best thing that’s happened to your marriage/relationship in a long time.

Chances are, like many men, when you hear the word “menopause” you instantly think “hot flashes,” or “no sex,” or “she’s chasing me around the table wielding a frying pan as smoke billows from her ears and all I did was ask her to pass the salt.” It’s time to change that.

Researcher and relationship therapist Ashley Howe recognizes that menopause can seriously stress a relationship. “(It’s) a bit of a slap in the face,” she says, “but sometimes you need that.”

That “slap,” however, may be the very thing it takes to force you and your partner to hit the reset button on your relationship. That’s, of course, IF you know how to take advantage it.

You probably recognize your partner from her strolls down one or more of these avenues. This is where you come in.

Think of it like this: if your partner was pregnant, you’d take her to the doctor, go to birthing classes, and hold her hand in the delivery room. That wasn’t necessarily the case with men 50 years ago, but childbirth went from being a “woman’s issue” to a “family issue.” Howe wants to see the same attitude take hold when it comes to menopause.

“(Menopause) can be a team thing,” she says enthusiastically. “It doesn’t have to be this girly issue that you can’t be a part of, and it’s actually the best way to show you care – to get informed and find out about it.”

Granted, Team Menopause sounds about as enticing as Team Vasectomy, but don’t turn away just yet.

Chances are, your partner spent the better part of her adult life caring for others – the kids, older family members, and of course, you. During menopause, women often don’t know how to take care of themselves.

To start, go to the doctor with your partner and learn about what she’s going through, physically and emotionally. A good catchall question, Howe suggests, is, “What can I do to make it a little bit better for you?” If she doesn’t know, make suggestions. And ask the question often.

Even the inevitable clashes, however big or small, that come with menopause offer a chance to explore deeper issues in your relationship that may have been swept under the rug for far too long. Learning to understand what your partner’s going through should help bring you both much closer, emotionally and physically. And speaking of physically-.

Another symptom of menopause tends to be lack of sex drive. A woman’s bodily functions change during menopause (and let’s be honest, yours change at that age too). If you felt like a furnace, Howe noted, you wouldn’t want to be canoodling under the covers either. As a result, some women shut their partner out.

As a remedy, Howe recommends taking sex off the table for a month. Yes, a month. Instead, do a bunch of other things, such as rubbing a cold cloth on your partner’s body when she’s hot. Or, simply make out like two teens in the back of a movie theatre. But no sex.

“What you’ll find is people will have more sex that month than they would have,” Howe says of the technique. “As soon as you take that expectation and that pressure away, all of a sudden people start to get comfortable.”

Very clever. As well, the more you know about how your partner’s body is working, and which functions no longer respond like they did 20 years ago, the less confusion/insecurity you’ll experience in bed.

Of course, the overarching benefit is that this all plays into Howe’s theory that couples should hit the refresh button on their relationship every five years.

“(Menopause) makes you say, ‘That whole routine that we used to do, it doesn’t work now,’” she says. “So you have to improvise and-start to explore.”

And hey, a little exploring could lead to some long-term benefits.

“People in their late 50s and 60s are reporting more satisfaction with their sex life. So there’s some hope at the other end.”

There you go gentlemen – menopause may actually provide a catalyst for a healthier, happier relationship. And, as Howe pointed out, a man who demonstrates a sincere effort to join Team Menopause will not go unnoticed. Evidently, they’re pretty darn sexy.

“[Like] a man who goes and gets the tampons at one in the morning,” she laughs. “There’s nothing more attractive than a partner, or a man, that knows about this stuff.”

Menopause not the end of an active sex life