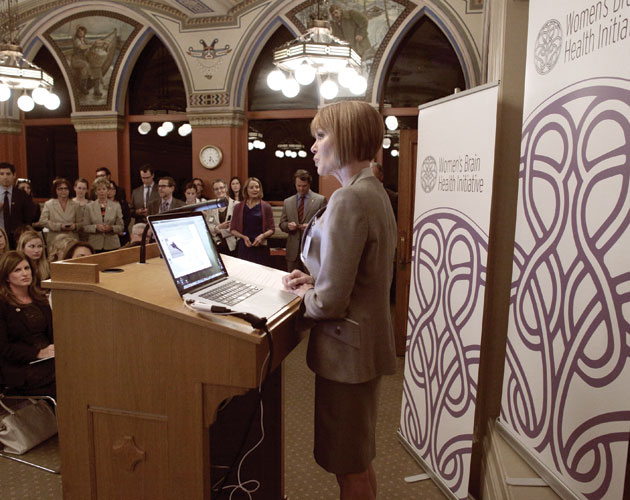 Philanthropist Lynn Posluns thinks science has ignored women’s brain health for too long. So She takes her advocacy to Ottawa for action.

“When I was studying [medicine], we saw women as little men in drag,” Liberal health critic Dr. Hedy Fry dryly reminded politicians and their aides, who packed the Senate’s Banking Committee Room last May for the introduction of the Women’s Brain Health Initiative (WBHI), a new national charity. “No one understood the depth of the differences between men and women,” she explained.

That scientific apathy surrounding gender difference had incensed Lynn Posluns, founder of the initiative. “It’s frightening to learn that almost 70 per cent of new Alzheimer sufferers will be women and that women suffer from depression, stroke and dementia twice as much as men,” she told the politicos.

Guest speaker Jens Pruessner, PhD, director, McGill Centre for Studies in Aging in Montreal, an expert on the effect of stress on the brain, gave one example of why there is a need to do research in women’s brain health. Estrogen protects women’s brains from the negative effect of the stress hormone, cortisol, but as estrogen wanes after menopause, this effect disappears. An enzyme in men’s brains, however, continues to convert some testosterone to estrogen, safeguarding a man’s brain cells.

As we talk later, Pruessner tells me, “I think [Posluns’ work] is a wonderful initiative. We need someone of sufficient motivation and energy.”

Not everyone launching a new charity can garner the support of the likes of Senator Linda Frum and Rona Ambrose, then minister of status of women and minister of public works, who co-hosted the Parliament Hill event. Posluns has been a friend of Frum’s for years, and Ambrose, now minister of health, has a history of involvement in groups working to end violence against women. Nevertheless, Posluns was blown away by the turnout of politicians that included Alice Wong, minister of state  for seniors, Sen. Art Eggleton (Lib), MPs Elizabeth May (Green), Libby Davies (NDP), Candice Bergen (Con)  and speakers Fry and Niki Ashton (NDP). Impeccably attired in a tailored taupe suit softened by a floppy silk flower, she’d worn a slightly anxious look before the guests arrived, prompted by warnings that attendance for such events on the Hill could be sparse. Then, after plunging into a brief patch of French, she charmed the bilingual audience by concluding, “Learning another language can add three to five years to cognitive reserves.”

Posluns’ reserves are already stocked with a master’s degree in business administration and a business career that included a term as president of Fairweather, a women’s fashion retail chain. Today, she’s managing director of Cedarpoint Investments, an investment firm started by her father, Wilfred Posluns. The head of a vast clothing empire in the ’70s and ’80s, he had raised $100 million for charitable causes that included Toronto’s Mount Sinai Hospital and the Baycrest Centre for Geriatric Health (now Baycrest Health Sciences).

Home-schooled in philanthropy, Posluns founded the Women of Baycrest in 2009 while serving on the board of the Baycrest Foundation, which supports the renowned centre of care and geriatric research. Within a year, Women of Baycrest had raised $1 million of a $5 million target for the first endowed chair in women’s brain health and aging and financial backing for female scientists working on those concerns.

Then came the realization that a more ambitious program could have a much wider impact than one under the umbrella of a Toronto-based institution. A stand-alone Women’s Brain Health Initiative could raise money separately from donors or government sources that would continue to support Baycrest, then fund research opportunities and deliver information to women in Canada and preferably globally on how to maintain their cognitive abilities.

RELATED POST: Is this just a ‘senior moment’ or am I losing my memory?

Since early 2012, Posluns has been busy with the nitty-gritty of setting up a charity, creating a board (chaired by Kirstine Stewart, managing director of Twitter Canada), getting banking arrangements in place and setting up charitable status in the U.S., where she hopes to introduce the initiative by 2014.

“What I’d love is 10 research chairs around the world, all focusing on [women’s brain health]. So that’s $50 million,” she tells me later when we meet in her airy office at Cedarpoint, which overlooks tony mid-Toronto neighbourhoods. Posluns is relaxed today, in slim white pants and a red denim jacket, and she’s bubbling with news. Her young organization needs to reach some donors with very deep pockets, who can make transformational donations and Heather Reisman (founder of Indigo Books and Music) has volunteered to host a private dinner in her Rosedale manor, with Arianna Huffington (co-founder and editor-in-chief of the Huffington Post blog), the guest speaker. “I feel like I’ve won the lottery,” Posluns exclaims. And no wonder – Reisman and Huffington have offered to do this gratis.

The organization’s launch in Toronto at the end of April began with a private pre-premiere showing of the feature film, Still Mine, written and directed by Michael McGowan. This true story of an 89-year-old New Brunswick farmer’s determination to build his wife a home that would keep her safe as she faded into Alzheimer’s disease perfectly illustrated the fear, sadness and frustration of deteriorating brain health. Stars James Cromwell, 73, who won a Canadian Screen Award for his portrayal of Craig Morrison, and Geneviève Bujold, 71, still petite and pretty, brought home the poignancy of love faced with the effects of dementia.

Also introduced at the affair was the Hope-Knot (www.hopeknot.org), a delicate round silver symbol enclosing a stylized brain (shown above), designed by Toronto jeweller Mark Lash, representing the interconnectivity of the brain. It’s a reminder of the importance of memory and cognitive thought – and of the significant women in our lives.

But if events like this provide glamour and cash for the WBHI, its founder’s passionate focus also falls on scientific evidence that will end dementias, depression, stroke and other conditions that affect the brains of some aging women.

No wonder she’s almost giddy at the thought of an invitation-only forum in Montreal this past August that will link researchers from across Canada with funders like the WBHI. In fact, the fledgling initiative was asked to become a partner, along with well-established institutions like the ASC, in the Canadian Consortium on Neurodegeneration in Aging (CCNA), the host of the forum. “This is really great for us in terms of credibility positioning, as well as having the opportunity to know where the money can go,” she says. Potential recipients of the funds will learn their work must focus on an aspect of women’s brain aging or “top up existing research so they take gender into account,” she notes. The CCNA also has international connections that could later help Posluns fund studies beyond Canada’s borders.

Part of the WBHI’s mission is to give women an opportunity to learn how to keep their brains healthy longer. During her term as chair, the Women of Baycrest hosted two popular events where scientists talked in lay terms about brain health. Using that model, she’s planning a six-city program this fall with local experts involved. “I want to access these scientists, but it will also let people know that we exist outside of Toronto,” she notes. Video clips from those events will let people access the information from the WBHI website (www.womensbrain health.org), itself an educational tool Posluns is careful to stock with facts from credible sources.

Taking care of your grey matter should start early, since symptoms may first appear many years after damage has occurred in the brain. “Not that it’s bad to start in your 60s, but if you start in your 30s, you have a better chance of keeping your cognitive abilities intact longer, and isn’t that what we want?” she asks.

“I didn’t want to go down that pathway [of cognitive loss] myself,” she confides. “You don’t want anyone you know to have to go through that. It’s pretty scary.”

Musical training and the aging brain